There are 1 high school codes in Mali today, according to the ACT. The full list is shown below by city, with name of each high school and the city where the school is located (based on the ACT official site). You can search a school code by pressing “Ctrl” + “F” and then type school name or 6-digit school code. 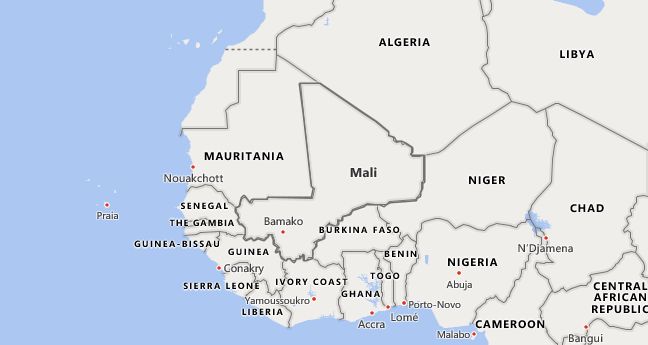 The above lists CEEB codes (College Entrance Examination Board) for all accredited Mali high schools. Please be informed that the list of high school codes in Mali may change throughout the year. If you can’t find codes for the high schools of your interest, please write to us or come back at a later time. We will update our database soon after a new high school code is added to the country of Mali.

In January 2012, fighting broke out again in the north of the country between Tuareg rebels (Mouvement national pour la libération de l’Azwad, MNLA), including former mercenaries of the Libyan dictator Gaddhafi, and the Malian army. The bloody clashes caused tens of thousands of civilians to flee to neighboring countries. Against this background, after a coup on March 22, 2012, a military council under the leadership of Colonel Amadou Sanogo (* 1972) took power and suspended the constitutional order. Following international sanctions, on April 6, 2012, the Military Council concluded an agreement with ECOWAS on a transfer of power. Thereupon the ousted president declared Touré resigned on April 8, 2012. The putschists received a promise of amnesty, the previous speaker of parliament Dioncounda Traoré (* 1942) took over the function of interim president. In the meantime, the Tuareg rebels, together with militant Islamists, had brought the north of the country under control and on April 6, 2012, declared the independent state of Azawad there.

On April 17, 2012 in Bamako Cheikh Modibo Diarra (* 1952) was appointed interim head of government of Mali. The latent tensions between supporters of the putschists and the transitional government escalated in May 2012 in an assault on President Traoré who received medical treatment in France until July 2012. In Azawad, the MNLA lost more and more influence vis-à-vis the Islamist groups (in addition to AQIM, the AQIM spin-off Mouvement Unicité et Jihad en Afrique de l’Ouest [MUJAO] and the Salafist organization Ansar Dine [“Defender of the Faith”]). The Islamists took control of important cities such as Timbuktu, Gao and Kidal and enforced Islamic law (Sharia) there. In Timbuktu they destroyed or damaged valuable cultural assets (including grave sites that are part of the world cultural heritage). Even after a cabinet reshuffle in August 2012, the Malian interim government’s ability to act remained restricted. On December 11, 2012, supporters of the junta forced Cheikh Modibo Diarra to resign. He was succeeded as head of government by Diango Cissoko (* 1949). In the international community, fears have grown that Mali will develop into a permanent refuge for militant Islamists. The UN Security Council therefore approved on December 20, 2012 a military mission for Mali (African-led International Support Mission to Mali, AFISMA) under the leadership of ECOWAS. The advance of the Islamists to the south finally led to French military intervention on January 11, 2013 (“Operation Serval”). The French units advanced quickly north and were able to regain control of Timbuktu, Gao and Kidal by the end of January. Hundreds of thousands fled the disputed areas. On April 25, 2013, the UN Security Council decided to create a peace mission for Mali (MINUSMA; Mission intégrée des Nations Unies pour la stabilization au Mali) for July 1. 2013. From 2013/14 the European Union deployed the European Union Training Mission in Mali (EUTM Mali) and the European Union CSDP Mission in Mali (EUCAP Sahel Mali) to train the army and security forces in Mali. Germany also provided staff for the international missions. A ceasefire agreement was signed with the Tuareg rebels in June 2013, which remained fragile. In the runoff election for the presidency on August 11, 2013 Ibrahim Boubacar Keita (* 1945), founder of the RPM party and prime minister of the country from 1994–2000. The economist Oumar Tatam Ly (* 1963) was appointedthe new head of government on September 5, 2013. In the parliamentary elections on November 24th and December 15th, 2013, Keitas RPM emerged as the winner with 61 out of 160 seats. After Oumar Tatam Lyresignedin April 2014, Moussa Mara took over(* 1975) the office of Prime Minister. When he wanted to visit the provincial capital Kidal, claimed by the MNLA, on May 17, 2014, bloody fighting broke out between the MNLA, other militias and the army that had been driven out of Kidal. After negotiations in Algiers, the government concluded a ceasefire agreement with the MNLA and other groups, but the security situation in northern Mali remained critical and there were repeated military clashes. In January 2015, President Keita appointed a new cabinet with Modibo Keita (* 1942, † 2021) as head of government. After several months of talks mediated by Algerians, the umbrella organization of the armed Tuareg signed a peace treaty negotiated with the government in 2015. In an attack on a hotel in Bamako on November 20, 2015, at least 20 people were killed and around 170 people were temporarily taken hostage. A group of Islamist terrorists affiliated with al-Qaida claimed responsibility for the attack.