There are 24 high school codes in Malaysia today, according to the ACT. The full list is shown below by city, with name of each high school and the city where the school is located (based on the ACT official site). You can search a school code by pressing “Ctrl” + “F” and then type school name or 6-digit school code. 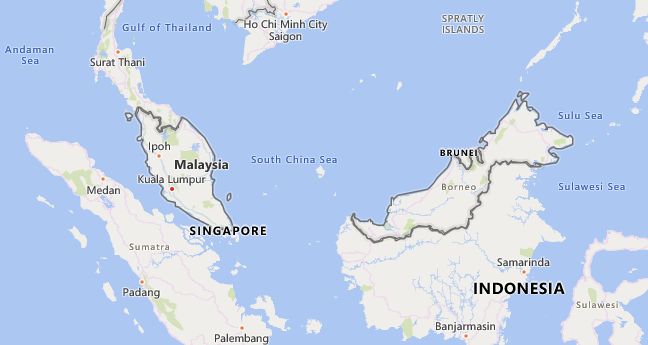 The above lists CEEB codes (College Entrance Examination Board) for all accredited Malaysian high schools. Please be informed that the list of high school codes in Malaysia may change throughout the year. If you can’t find codes for the high schools of your interest, please write to us or come back at a later time. We will update our database soon after a new high school code is added to the country of Malaysia.

West Malaysia comprises the south of the Malay Peninsula including offshore islands (largest islands: Pinang, Langkawi) and borders Thailand in the north and Singapore in the south. Eastern Malaysia, consisting of Sarawak and Sabah, occupies the north of the island of Borneo and borders Indonesia and Brunei.

West and East Malaysia are separated from each other by an approximately 600 km wide part of the South China Sea. The Malay Peninsula is criss-crossed by mountain ranges that are broadly developed in the north (main ridge up to 2,190 m above sea level), which merge into swampy coastal plains via parallel mountain and hill zones. Widely marshy alluvial plains also accompany the coasts of Sarawak and Sabah on North Borneo.

Inland the surface rises, in Sarawak mainly to hull areas with individual mountain ranges, in Sabah to a strongly indented mountainous country (summit corridor at about 2,000 m above sea level), which in Kinabalu has the highest elevation in Southeast Asia at 4,101 m above sea level.

Malaysia has an intra-tropical climate, which is determined all year round by maritime, moist, warm air masses. The winter northeast monsoon superimposes the typical precipitation pattern of the equatorial zone, which brings high rainfall, especially to the northeast of the Malay Peninsula, from November to April. The lowlands of western and eastern Malaysia receive mean annual rainfall of 2,000 to 4,000 and 3,000 to 4,600 mm, respectively, and the mountains in some cases up to over 6,000 mm. The monthly mean temperature in the lowlands is 26.5 ° C; in the other areas there are only deviations of ± 1.5 ° C. The daily and annual temperature fluctuations are small: they are around 2 ° C between the coolest and warmest month. The relative humidity is high: 98% in the morning and over 65% in the afternoon.

Malaysian literature. The Malaysian literature stands in the tradition of the Malay literature, which, as predominantly courtly literature, developed under the influence of Indian culture (8th – 16th century) and Islam (from the 14th century) (Indonesian literature) and, as well as the Malay language, experienced a modernization in connection with the end of colonialism. A first novel in the new style was the “Hikayat Faridah Hanum” (History of Faridah Hanum, 1925) by Syed Sheikh al-Hady (* 1867, † 1934), which can be traced back to an Egyptian work. Between the world wars, novelists such as Ahmad Lutfi (* 1911, † 1969) and Ishak bin Haji Mohammad (* 1910, † 1991) with their socially or historically determined topics as well as in the poetry Masuri S. N. the foundations for the actual Malaysian literature, of which one can speak only after the establishment of the state (1963). Shahnon Ahmad (* 1933), known for his realistic stories about the misery of the rural population, and the poet Latiff Mohidin (* 1941) are considered the most outstanding authors of the new state.