There are 5 high school codes in Macedonia today, according to the ACT. The full list is shown below by city, with name of each high school and the city where the school is located (based on the ACT official site). You can search a school code by pressing “Ctrl” + “F” and then type school name or 6-digit school code. 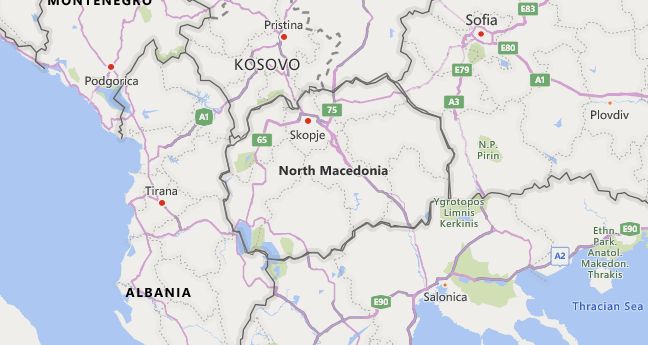 The above lists CEEB codes (College Entrance Examination Board) for all accredited Macedonia high schools. Please be informed that the list of high school codes in Macedonia may change throughout the year. If you can’t find codes for the high schools of your interest, please write to us or come back at a later time. We will update our database soon after a new high school code is added to the country of Macedonia.

There is general compulsory schooling between the ages of 6 and 15. It extends to attending nine-year elementary school (three levels of three years each). This is followed by secondary schools: general high schools (4 years) or medium-sized technical schools (3-4 years). In 2008, a state Abitur examination (Matura) was introduced. Industrial and commercial training takes place in vocational and craft schools with two to three-year training periods. In addition to the four state universities in Skopje (founded in 1949), Bitola (founded in 1979), Tetovo (founded in 1995) and Štip (founded in 2006), there are several state-accredited private universities as well as a large number of higher education institutions, some of which are comparable to German universities of applied sciences.

The media landscape is very diverse and is characterized by strong competition, especially when it comes to television. In 2015 it became known that the government had wiretapped more than 100 journalists. – Press: The biggest daily newspapers include »Dnevnik« (founded in 1996), »Vest« (founded in 2000), »Utrinski Vesnik« (founded in 1999) of Media Print Makedonija (MPM), a company of the Funke media group, and »Večer« ( founded in 1963), and “Nova Makedonija” (founded in 1944), both state-owned. In the Albanian language appear inter alia. the daily newspapers »Lajm«, »Koha Ditore« and »Fakti«. – News agencies: Makedonska Informativna Agencija (MIA, state), MakFax (independent), INA (Albanian). – broadcasting: The public broadcaster Makedonska Radio-Televizija (MRT) broadcasts three radio programs, also in Albanian and other minority languages, as well as four television programs; underneath is a parliament canal. Private TV stations are “Sitel TV”, “Kanal 5”, “Telma”, “Alfa TV” and Alsat-M (bilingual). The private radio stations include “Kanal 77 – Radio Mrescha”, “Antenna 5” and “Metropolis Radio”.

Conscription was abolished in 2007. The total strength of the armed forces (excluding army troops) is around 8,500 men. Around 7,600 police officers are available as paramilitary forces. Defense spending represents (2018) 1.2% of gross domestic product (GDP).

The constitution (Article 19) guarantees freedom of religion. The religion law passed in 1997 (with changes in 1999) forms the basis of the state’s religious policy. It differentiates between religious communities (Macedonian Orthodox Church; Islamic community) and religious groups and allows religious activity that can claim the protection of the constitution only in the state-registered communities and groups. As the largest Christian denomination, the Macedonian Orthodox Church has a prominent position in public life. The Orthodox Christians among the Albanians, Serbs, Montenegrins and Bulgarians living in Macedonia belong to their Orthodox people’s churches.

According to the latest available estimates, just under 60% of the population are Christians: around 59% Orthodox, around 0.3% Catholics (mostly of the Byzantine rite), a small minority of Protestants (especially Methodists, Pentecostals, Baptists; also Adventists). Over 39% of the population profess Islam. There is a diminishing Jewish community.

The Macedonian Orthodox Church includes seven eparchies (dioceses) in the country: Skopje, Bregalnica, Strumica, Povardarje, Prespa and Pelagonia, Debar and Kicevo, Polog and Kumanovo. For Catholic Christians, there is the Diocese of Skopje (established in 2000; Latin rite) and the Apostolic Exarchate of Macedonia (seat: Skopje, established in 2001; Byzantine rite).

The “Islamic Senior Council” for Macedonia is based in Skopje, where there is also a spiritual college (madrasa). The capital is also the center of the Jewish community (synagogue in Skopje), whose historical roots lie in the historical landscape of Macedonia (1910: over 90,000 Jews) until the 6th century BC. Go back BC.