There are 1 high school codes in Lesotho today, according to the ACT. The full list is shown below by city, with name of each high school and the city where the school is located (based on the ACT official site). You can search a school code by pressing “Ctrl” + “F” and then type school name or 6-digit school code. 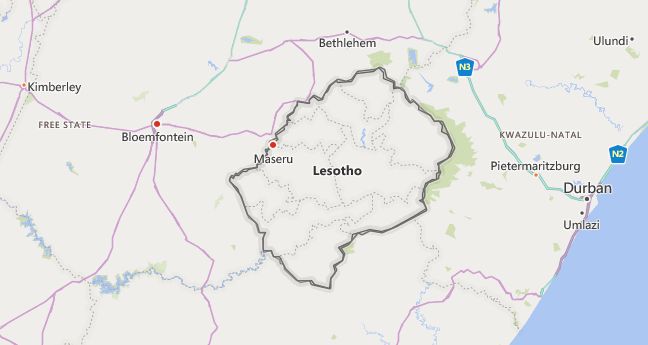 The above lists CEEB codes (College Entrance Examination Board) for all accredited Lesotho high schools. Please be informed that the list of high school codes in Lesotho may change throughout the year. If you can’t find codes for the high schools of your interest, please write to us or come back at a later time. We will update our database soon after a new high school code is added to the country of Lesotho.

Lesotho is a member of the Southern African Customs Union (SACU), which also includes the Republic of South Africa, Botswana, Eswatini and Namibia. Measured in terms of gross national income (GNI) of US $ 1,280 per resident (2017), Lesotho is the poorest country in this community and one of the least developed countries in the world. The economy is based primarily on the export of textiles, diamonds, as well as water and electricity, which are sold to the Republic of South Africa. The majority of households are dependent on subsistence farming or migrant work. The remittances of the Lesothian labor migrants (especially in the South African mining industry) contribute significantly to the state income. The inflation rate (2016) is 6.4%, the foreign debt is US $ 1.03 billion.

Foreign trade: The foreign trade balance is chronically negative (import value 2016: 1.63 billion US $, export value 0.81 billion US $). Textiles, diamonds and electricity are important export products. The main imports are foodstuffs, finished products and fuels. In addition to the SACU countries (especially the Republic of South Africa), Asian countries (especially China, Taiwan, South Korea and Singapore) are becoming increasingly important as importing countries. Next to the Republic of South Africa, the USA is the largest export partner.

The main line of business is the agricultural sector, but its share of the gross domestic product (GDP) fell from 18% in 2002 to 5.7% in 2015. Land is the unsalable property of the nation and is administered by the king. In contrast to pastureland, there are individual rights of use for arable land, which are set anew every year. Due to the predominantly mountainous nature of the country, only about 9% of the country can be used as arable land. Depending on the altitude, the most important crops are corn, millet, wheat and legumes. Due to recurring periods of drought, the harvest quantities are not sufficient for self-sufficiency, so that food imports (especially from the Republic of South Africa) are necessary to supply the urban population in particular. In contrast, meadows and pastures on around 66% of the country’s area offer favorable conditions for cattle breeding. The keeping of angora goats and sheep is important for export. Lesotho is one of the leading producers of mohair wool; Sheep wool is also an important export product.

Lesotho has deposits including of diamonds, uranium, lead, coal, agate and quartz. After years of insignificance (2001: 1,140 carats), diamond production, which was important until the beginning of the 1990s, increased again due to the development of new mines (2016: 342,014 carats). At the beginning of 2018, the fifth largest diamond on earth (910 carats) was found. However, more than two thirds of the diamond mines are in foreign hands.

Water is Lesotho’s greatest natural resource. The »Lesotho Highlands Water Project« agreed between Lesotho and the Republic of South Africa in 1986 provides a network system primarily in the catchment areas of the Senqunyane (also Senqu [ Oranje ]) and Malibamatso River proposed the construction of six dams and a hydroelectric power station. This is intended to cover Lesotho’s electricity needs on the one hand, and the construction of a tunnel system to enable water to be introduced into the water project and delivered to the greater Johannesburg area (Republic of South Africa). In the first construction phase, the dam of the Katse Dam (185 m high, 710 m long) in the Malibamatso River was completed in 1996. Since the end of the first construction phase in 1998, Lesotho has been almost completely independent in terms of electricity production and exports energy to the Republic of South Africa. In the meantime, the Muela dam (55 m high) and the Muela power plant as well as the Mohale dam (145 m) have been completed.

The manufacturing industry, especially the textile and food industry, has seen a considerable upswing since 1980. On the one hand, Lesotho benefited from the embargo imposed on the Republic of South Africa and from the divestments in this country; on the other hand, many investments, mainly from American, but increasingly also from Chinese companies in the textile sector, flowed to Lesotho. The most important commercial locations are Maseru and Maputsoe.

Lesotho offers good conditions for tourism with its national parks, mountain landscapes and cultural heritage. The government of Lesotho is planning a broad-based tourism strategy to better develop the country and increase the number of visitors (2014: 457,000 foreign guests).

In terms of traffic, Lesotho is not sufficiently developed. The country has no railways, only a 2.6 km long connection from the capital Maseru to the South African rail network. The road network (5,900 km, 1,100 km of which is paved) is hardly passable after heavy rainfall. Therefore, domestic air traffic is of particular importance: Lesotho has 24 airfields and runways. International airport is Thota-ea-Moli near Maseru.