There are 3 high school codes in Cote d’Ivoire today, according to the ACT. The full list is shown below by city, with name of each high school and the city where the school is located (based on the ACT official site). You can search a school code by pressing “Ctrl” + “F” and then type school name or 6-digit school code. 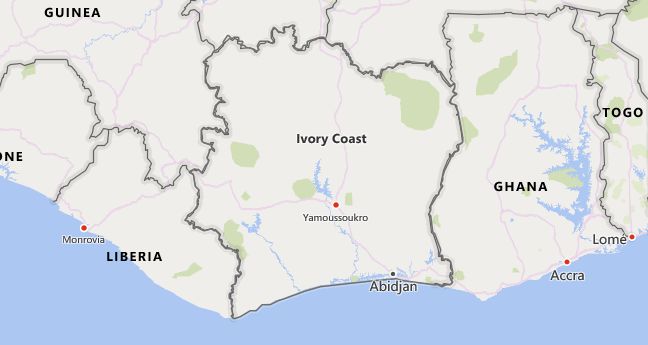 The Ivory Coast borders on the Gulf of Guinea (Atlantic Ocean) in the south, Liberia and Guinea in the west, Mali and Burkina Faso in the north, and Ghana in the east.

The 550 km long, in the west rocky, otherwise flat and lagoon-rich coast is followed by a 150-300 km wide forest belt, originally a tropical rainforest, today degraded and heavily cleared by deforestation (precious woods) and the creation of plantations. The Taï National Park was placed under protection as the remainder of the West African primary rainforests. To the north follow wet savannah and dry savannah with the Comoé National Park.

The country is predominantly a slightly undulating hull surface, slightly inclined towards the Gulf of Guinea, at 200–500 m above sea level, surmounted by island mountains. The rivers Cavally, Sassandra, Bandama and Comoé flow on it, only partially navigable due to the many rapids and waterfalls, south to the Atlantic. In the west, the Republic of Ivory Coast is part of the Guinea highlands, about 1,000 to 1,500 m above sea level. The highest point in the country is Mt. Nimba (1,752 m above sea level) on the border with Guinea.

In the south there is a tropical equatorial climate with almost year-round precipitation (up to 2,300 mm annually), high relative humidity (80 to 90%), high temperatures and low seasonal temperature differences (mean maxima in March 32 ° C, mean minima in August 22 ° C) . There are four seasons: December to March (large dry season), April to July (main rainy season), August to September (small dry season), October to November (small rainy season). In the north, the savannah area, there is the Sudan climate: the temperature differences are increasing, the precipitation is lower (1,200–1,400 mm annually) and falls in a pronounced rainy season from June to October. The relative humidity in the center can still be up to 70%, in the north it falls to 30% in the dry season. There is, especially from December to February, Harmattans noticeable. The mountains in the west have annual precipitation of 2,000 mm at lower temperatures.

The population is made up of over 60 ethnic groups; In the center and south-east live the Baule and Agni, belonging to the Akan, in the south-west Kru, in the north-west Mande peoples (especially Malinke, Dan), in the north above all the Senufo, who belong to the Gur, and in the south the strongly mixed “lagoon tribes” (an older one Class of the population). The Dyula, whose language is widely used as the native lingua franca, live all over the country. Over a quarter of the population are foreigners, mainly migrant workers from the neighboring countries Mali, Burkina Faso, Guinea and Liberia, as well as political refugees (2017: 702 400). The minorities include Europeans, Lebanese and Syrians.

The average population density is 76 residents / km 2. The main settlement is the coastal plain, the northeast is hardly inhabited. As a result of the ongoing rural exodus and the strong population growth (2017) 56% of the residents live in cities. The most important cities are the economic metropolis of Abidjan, Bouaké, Daloa, Yamoussoukro and San Pédro.

Social: Due to the tense economic, social and political conditions, many Ivorians leave their homeland every year. The health care system, which includes state, private and denominational institutions, shows a clear urban-rural divide in terms of its equipment. In the already undersupplied north, medical care was also severely affected by the civil war. Statistically, there was only one doctor and 4 hospital beds for every 10,000 residents.

The biggest cities in Ivory Coast