There are 3 high school codes in Denmark today, according to the ACT. The full list is shown below by city, with name of each high school and the city where the school is located (based on the ACT official site). You can search a school code by pressing “Ctrl” + “F” and then type school name or 6-digit school code. 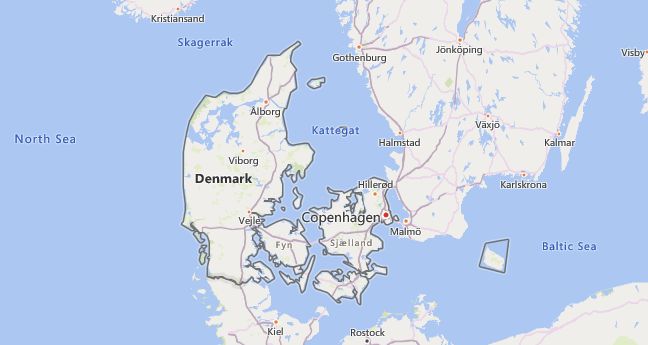 The above lists CEEB codes (College Entrance Examination Board) for all accredited Denmark high schools. Please be informed that the list of high school codes in Denmark may change throughout the year. If you can’t find codes for the high schools of your interest, please write to us or come back at a later time. We will update our database soon after a new high school code is added to the country of Denmark.

The residents are almost exclusively Danish. The share of foreign citizens is 8.44% (2017), of which almost 30% come from the EU, Norway and Iceland. In addition, 47,900 refugees were registered at the end of 2017. The German-speaking minority in South Jutland (North Schleswig) has a share of 0.3% of the total population, but makes up over 20% in individual communities north of the German-Danish border (Tønder, Løgumkloster, Højer, etc.). The average population density of Denmark (excluding Greenland and Faroe Islands) is (2017) 137 residents per km 2. However, around 40% of the population live on the island of Zealand with the capital region of Copenhagen. In contrast, the peripheral parts of the country, especially Bornholm, are relatively sparsely populated. They also suffer from the migration of the population to the urban centers. Overall, 88% of all Danes live in urban settlements; the largest cities are next to Copenhagen, Aarhus, Odense and Aalborg.

The biggest cities in Denmark

The constitution (Article 4) guarantees the position of the Danish Lutheran People’s Church (Evangelisk-lutherske Folkekirke in Danmark) as the Danish national church with a constitutional right to support from the state. Freedom of religion is guaranteed by Articles 67–70; The king, who according to the constitution (Article 6) must belong to the Lutheran Church, is excluded from this. State recognition is a prerequisite for religious communities to exercise their rights associated with religious freedom (e.g. legally valid marriages).

Almost 76% of the population belonged to the Lutheran national church (at the beginning of 2017). The number of members is falling steadily (still over 89% in 1990). Other (post-) Reformation churches and communities (Baptists, Methodists, Free Church Lutherans, Reformed, etc.) form small Christian minorities, as do Orthodox Christians or other faith groups related to Christianity such as Adventists, Mormons or Jehovah’s Witnesses. About 0.7% of the population are registered members of the Catholic Church (Diocese of Copenhagen).

The Lutheran People’s Church is divided into ten monasteries headed by bishops, with the Bishop of Zealand / Copenhagen as primus inter pares. Its general (“external”) affairs are decided by the legislation of the Reichstag and administered by the state church ministry, the spiritual (“internal”) affairs are regulated by ecclesiastical bodies; they are financed by the church tax levied by the state on church members. As a traditional right within the Danish state, the national church fulfills the civil function (notarization of births, marriages and deaths). The German-speaking Evangelical Lutheran Saint Petri Congregation in Copenhagen, founded in 1575, also belongs to the national church. German-speaking communities also exist in North Schleswig (Tondern, Aabenraa, Hadersleben, Sonderburg). The churches of Greenland and the Faroe Islands are formally under the jurisdiction of the Bishop of Zealand / Copenhagen, but have their own vice-bishops. The Danish Church Abroad (Dansk Kirke i Udlandet) includes the Danish congregation in Berlin (Christianskirken) and 39 congregations in southern Schleswig (Dansk Kirke i Sydslesvig), which are subordinate to a Danish provost in Flensburg.

Non-Christian religious communities are formed by Buddhists, Muslims with around 4% of the population and Jews (estimated between 0.1 and 0.15% of the population; three synagogues in Copenhagen). The history of the Jewish community in Denmark goes back to the last third of the 17th century (1684 right to hold church services [in private homes] in Copenhagen).

Denmark has a maritime climate with cool summers and mild winters with prevailing westerly and southwest winds (late autumn and winter often stormy), with high relative humidity (annual average 83%, May / June 75%) and rapid weather changes in westerly weather conditions. The average annual precipitation is low because of the relatively flat land area, it is 800 mm in West Jutland and 500 mm in the Great Belt; August and October are the rainiest; Good weather periods are common in April and May. The warmest months reach an average of 16 ° C on the North Sea, 18 ° C in the southeast and on Bornholm; the lowest mean winter temperatures are 0.3 ° C in the west and on Bornholm, and -0.3 ° C on the east coast of Jutland.