There are 42 high school codes in Colombia today, according to the ACT. The full list is shown below by city, with name of each high school and the city where the school is located (based on the ACT official site). You can search a school code by pressing “Ctrl” + “F” and then type school name or 6-digit school code. 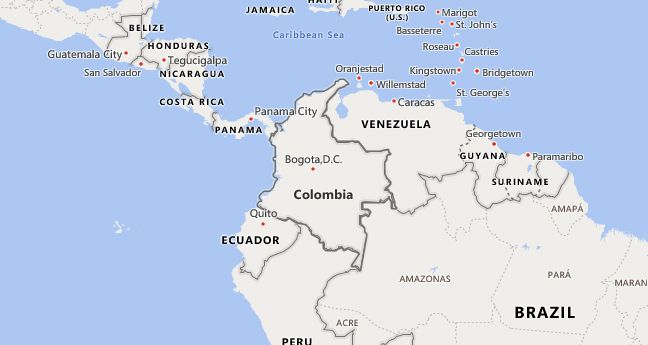 The above lists CEEB codes (College Entrance Examination Board) for all accredited Colombia high schools. Please be informed that the list of high school codes in Colombia may change throughout the year. If you can’t find codes for the high schools of your interest, please write to us or come back at a later time. We will update our database soon after a new high school code is added to the country of Colombia.

According to the constitution that came into force on July 5, 1991 (revised several times), Colombia is a presidential republic. The head of state, head of government and commander-in-chief of the armed forces is the president, who is directly elected for 4 years (one-time re-election possible). He appoints the members of his cabinet and decrees, inter alia. a temporary emergency law. The constitution fixes political, economic, social and cultural rights as well as special rights for the indigenous and Afro-Colombian minorities. It also provides for plebiscitary elements (popular polls, referendums).

The lawyer I. Duque, a candidate for the right-wing conservative Centro Democrático (Democratic Center), has been the state president since August 7th, 2018. He is the successor to JM Santos Calderón , who in 2016, after decades of bloody disputes, reached a peace agreement with the rebel group FARC succeeded. The remaining 5,800 FARC fighters had to surrender their weapons and a land reform is being carried out. This ended the conflict that broke out in 1964 with the guerrillas, which are closely linked to the drug mafia, and the acts of violence by paramilitary groups. The civil war severely hampered the country’s economic and political development, claiming over 220,000 deaths by 2017 and forcing over 7 million people to flee.

The legislature lies with the bicameral parliament (legislative period 4 years), consisting of the Senate (108 members) and the House of Representatives (171 members, 5 seats are reserved for representatives of ethnic minorities and foreign Colombians). After the elections on March 11, 2018, the Centro Democrático, Partido Conservador and other parties form the governing coalition in the House of Representatives. The political party that emerged from the FARC is guaranteed five seats each in both houses of parliament by the peace treaty.

In terms of foreign policy, the Andean state has traditionally been closely linked to the USA. Relations with Venezuela, on the other hand, are tense. Colombia criticizes the left-wing political development in the neighboring country, which has been shaken by political unrest, and had to take in one million Venezuelan refugees.