There are 9 high school codes in Cambodia today, according to the ACT. The full list is shown below by city, with name of each high school and the city where the school is located (based on the ACT official site). You can search a school code by pressing “Ctrl” + “F” and then type school name or 6-digit school code. 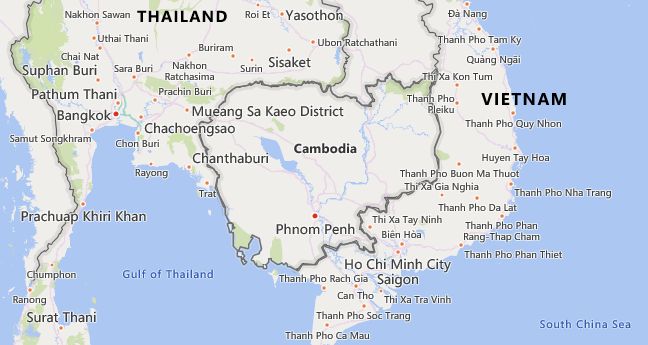 The above lists CEEB codes (College Entrance Examination Board) for all accredited Cambodian high schools. Please be informed that the list of high school codes in Cambodia may change throughout the year. If you can’t find codes for the high schools of your interest, please write to us or come back at a later time. We will update our database soon after a new high school code is added to the country of Cambodia.

The constitution, which came into force on September 24, 1993 (revised several times), defines Cambodia as a constitutional electoral monarchy with a multi-party system. The head of state is the king. He is elected for life by the Council of Thrones, embodies the symbol of national unity, is Commander-in-Chief of the Armed Forces and heads the National Defense Council. The legislature is supported by the National Assembly, whose 123 members are elected for 5 years according to proportional representation (voting right from the age of 18). In 1999 the Senate was created as the second chamber of parliament (term of office 5 years; currently 61 members). In the event of the king’s vacancy, the President of the Senate assumes the role of the incumbent head of state. The government chaired by the Prime Minister (appointed by the King on the recommendation of the President of the National Assembly from among the largest political group) is responsible to Parliament. Since the constitutional amendment in 2006, it must be able to rely on a simple majority (50% of the votes plus one member) in the National Assembly. The Constitutional Council, whose 9 members are appointed for a term of 9 years, 3 each from the King, the Parliament and the Supreme Council of Judges is responsible for the control of norms.

After the Revolutionary People’s Party of Kampuchea gave up its monopoly claim in 1991 and renamed itself the Cambodian People’s Party (KVP), a plural party system emerged in Cambodia. Another party is FUNCINPEC (abbreviation for Front Uni National pour un Cambodge Indépendant, Neutre, Pacifique et Coopératif). The Sam Rainsy Party (SRP) merged with the Human Rights Party (HRP) in 2012 to form the National Rescue Party of Cambodia (CNRP). The CNRP was dissolved by the Supreme Court in November 2017.

The total strength of the armed forces is about 124,000, that of the paramilitary people’s police force about 70,000 men. The army, which is divided into six military regions, has around 75,000 soldiers, and has 22 infantry divisions each with only one regiment, as well as other independent combat and combat support units. The air force has 1,500 and the navy 3,000 soldiers. In addition, there are around 45,000 lightly armed men who are grouped in militia-like infantry units in the provinces (one regiment per province).

Cambodia is divided into 24 provinces and the capital Phnom Penh, which are divided into districts and municipalities.

The law is based on French-influenced norms that were (re) introduced under the UN administration, and new laws such as e.g. T. on common law. Under the 1993 Constitution, there is a Supreme Court and a Royal Attorney General. In 1997 a High Council of Judges was established. The position and the tasks of a constitutional court are carried out by the constitutional council (9 members). Various courts of lower instance are subordinate to the Supreme Court, so that – with restrictions – there is a functioning judiciary. The death penalty was abolished in 1989.

The ruling party KVP and the presidential family have a strong influence in the media landscape. Press laws, penal regulations and government regulations hinder free reporting.

Broadcasting: “Vithyu Cheat Kampuchea” (“National Radio Cambodia”, founded in 1978 as “Voice of the Cambodian People”), which broadcasts programs in six languages, and “National Television of Cambodia” (TVK) are state-owned. “TV 5” belongs to the armed forces, “Apsara Television” is the station of the Cambodian People’s Party. Private are i.a. »TV 9«, »CTN«, and »Bayon TV«. »TV 3« is a joint venture with the city of Phnom Penh. Of the approximately 75 radio stations nationwide, more than 30 were forced to close in 2017.