There are 5 high school codes in Bosnia and Herzegovina today, according to the ACT. The full list is shown below by city, with name of each high school and the city where the school is located (based on the ACT official site). You can search a school code by pressing “Ctrl” + “F” and then type school name or 6-digit school code.

Map of Bosnia and Herzegovina 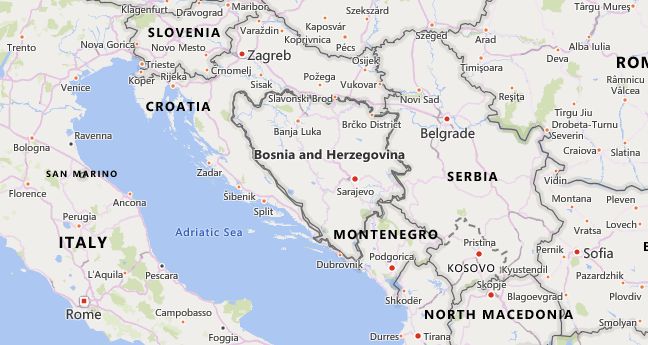 Bosnia and Herzegovina borders Croatia to the north, west and south, Serbia to the east and Montenegro to the south-east;

With the exception of a small proportion of the Savoy Lowlands in the north (Posavina) and an adjoining strip of hilly land, Bosnia and Herzegovina is a decidedly mountainous country that includes part of the Dinaric Mountains. The mountain region is divided into two strongly contrasting sub-areas: the Bosnian highlands and the Hochkarst (Karst). The Bosnian highlands, mostly made up of slate and sandstone, are characterized by a varied structure of rounded heights and deeply cut valleys, modeled by a ramified network of water, the main veins (Kupa, Una, Vrbas, Bosna, Drina)), following the mountain tops, belong to the catchment area of ​​the Sava.

The Bosnian Ore Mountains belong to the slate zone of the Dinaric Mountains, between Upper Vrbas and Upper Bosna, in the Vranica up to 2 107 m above sea level. It has large deposits of iron ore and lignite. The high karst area, on the other hand, consists of limestone. Its relief character is determined by wide-span plateaus (around 1,200 m above sea level), which are dominated by chains or limestone massifs (in Maglić on the border with Montenegro up to 2,386 m above sea level).

The limestone zones are subject to progressive karstification due to their water solubility; A closed soil and vegetation cover (“covered” or “green” karst) is usually formed on them. The high permeability of the lime allows only a drought-resistant grass and bush growth despite high amounts of precipitation (1,000–2,000 mm / year). The Neretva is the only river that crosses the Hochkarst area, the valley of which is an important traffic route.

Embedded in the karst plateaus are a number of poljen, large tub-like basins of a maximum of 400 km 2, which alone allow extensive agricultural use. Access to the Adriatic Sea consists only of a narrow coastal strip of 24 km (excluding the port). Wine is grown on a stony, karst plateau near Mostar and on the middle reaches of the Neretva.

The coat of arms from May 19, 1998 is a blue shield with the heraldic left corner in gold, parallel to the dividing line, the blue part is covered with seven silver stars, starting from the heraldic right corner. The two outer stars are cut off.

The national holiday on March 1st commemorates the independence referendum in 1992. On November 25th, the proclamation of the People’s Republic of Bosnia and Herzegovina from 1943 is celebrated. In the Serbian Republic, January 9 (“Republic Day”) and November 21 (initialing of the Dayton Peace Agreement) are national holidays.