There are 5 high school codes in Benin today, according to the ACT. The full list is shown below by city, with name of each high school and the city where the school is located (based on the ACT official site). You can search a school code by pressing “Ctrl” + “F” and then type school name or 6-digit school code. 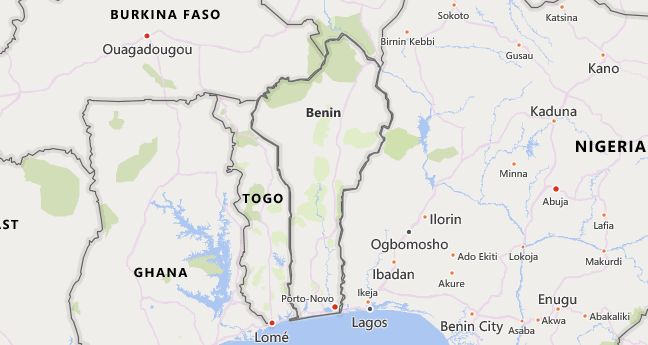 The above lists CEEB codes (College Entrance Examination Board) for all accredited Benin high schools. Please be informed that the list of high school codes in Benin may change throughout the year. If you can’t find codes for the high schools of your interest, please write to us or come back at a later time. We will update our database soon after a new high school code is added to the country of Benin.

Benin borders Togo to the west, Nigeria to the east, Niger and Burkina Faso to the north.

Benin extends from the Bay of Benin, on the coast of which it has a portion of 115 km, 670 km inland to the north. On the tropical humid coastal retreats behind sandy, up to 12 km wide spits a lagoon chain out; behind it follows a gently undulating coastal plain, which is covered by heavily thinned wet forests with oil palm stocks. The interior of the country is largely characterized by a plateau 400 m above sea level (wet savannah in the south, bush and thorn savannah in the north; savannah) overlooked by island mountains. It arches in the northwest to the Atakora Mountains (Mt. Sokbaro, 658 m above sea level). In the northeast, Benin has a share in the fertile valley landscapes of the Niger, which forms the border with the Republic of Niger for 150 km. The most important river is the Ouémé (510 km long), which flows into the lagoon of Porto Novo and is navigable from Dogba.

In the south there is a tropical climate with two rainy seasons (March to mid-July, mid-September to mid-November), in the north these coincide with one rainy season (in Kandi: end of April to mid-October). The mean annual precipitation is between 900 and 1 400 mm (Cotonou 1 312 mm), the mean temperatures on the coast are between 24 ° C (August) and 27 ° C (March) with constantly high humidity, in the north between 22 ° C (December) and 40 ° C (April).

Over half of the population lives in the south on only 10% of the country’s area, especially the Fon and others. language groups belonging to the Ewe, which make up the largest part of the population. Yoruba live on the border with Nigeria, in the center of the country and in the big cities, in the north Bariba, Fulbe and Dendi. In total there are up to 50 ethnic groups in Benin. The official language, French, is spoken by around 40% of the population. Fon, Yoruba and Hausa predominate as colloquial languages. The share of the urban population is 45% (2017). The largest cities are the port city of Cotonou and the capital Porto Novo; Also of importance are Parakou, the old royal city of Abomey with its neighboring town Bohicon, Djougou, Ouidah and Natitingou.

The biggest cities in Benin

The constitution guarantees freedom of religion. The population is characterized by a strong religiousness. Traditional religious ideas and practices, especially voodoo in the south, are widespread and are in dynamic development. At the same time, the number of followers of universalistic religions (Christians; Muslims) is increasing. The (according to the latest available statistical surveys) a good 48% Christians belong predominantly to the Catholic Church (more than 25% of the population; two archbishoprics [Cotonou; Parakou] with eight suffragan dioceses). The largest Protestant church is the Methodist Church (“Eglise Protestante Méthodiste au Benin”) with over 3% of the population. Almost 7% of the population profess to the “Celestial Church of Christ” (“Église du Christianisme Céleste”) founded in 1947 in what is now Benin. Less than 28% of the population are Sunni Muslims from the Maliki school of law; they live v. a. in the north and in Porto Novo. About 12% of the population follow the voodoo. Overlays in religious practice are often the rule, which often makes precise religious assignments difficult. About 6% have no religious affiliation.