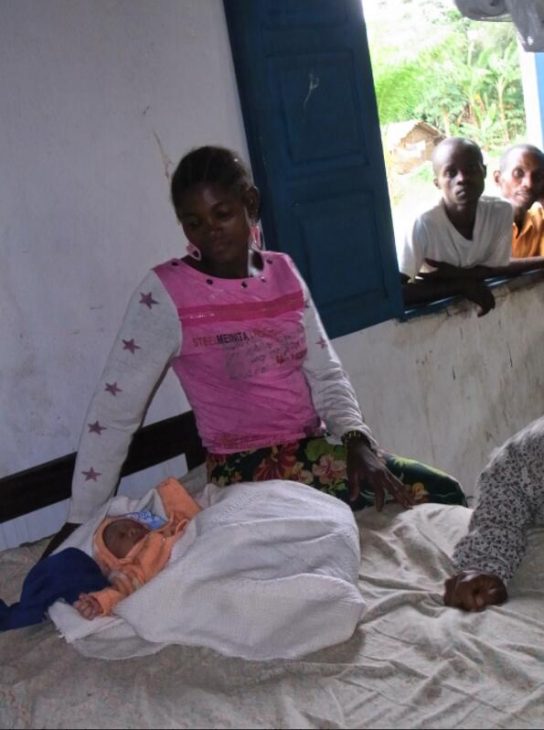 The health system of the Democratic Republic of the Congo, which was set up with the support of the World Health Organization (WHO / OMS), is very well thought out. Central hospitals (Hôpital de Reference) are assigned secondary health structures (Zone de Santé, Center de Santé, Poste de Santé), depending on the size of the population and the density of settlement. Each health zone supplies around 150,000 people. In principle, there is no duplication of hospitals in the catchment area of the reference hospitals. The system is inexpensive and could guarantee good medical care for the population.

In reality, the deficits in implementation are evident in many places. In a large part of the Democratic Republic of the Congo, the health facilities in the 306 health zones are very inadequately equipped. There is a lack of funds for medicines, equipment and qualified medical and administrative personnel. Most of the 400 hospitals were built in colonial times and are in poor condition.

The staff is extremely poorly paid, people come to terms with corruption and private services, which are often only accessible to the wealthy. So it happens that the public budget uses up to 2% of GDP only scanty funds for health care.

Due to the collapse of the infrastructure, medical care in the interior of the country is often only available in church health facilities. Many people die from treatable diseases such as gastrointestinal diseases or malaria. In most rural regions, only emergency medicine can usually be operated. Malaria is still the most dangerous disease and leading cause of death for people in the DR Congo, especially children and pregnant women. National and international organizations are involved in a national program to combat malaria.

The armed conflicts in the country make the fight against malaria impossible in many places. So it happens that around 34% of deaths are still due to malaria. The annual report of the World Health Organization (WHO) shows 27,458 deaths from malaria in the DR Congo in 2017.

Following the global trend, infant mortality in the Democratic Republic of the Congo also fell continuously from 129 to 68.2 deaths (per 1,000 live births) between 2007 and 2017. Viewed globally, the DR Congo is very poorly positioned with 12th place in the world rankings of 186 countries.

Almost all donor organizations that are active in the DR Congo support individual medical projects. As a rule, they take over entire health zones, including the reference hospitals, either directly or in cooperation with a church supporting structure. Other donors, such as the EU, ensure the supply of medicines for several health zones for several years. In recent years, the training of nurses, health workers and doctors across the country has intensified.

Traditional medicine and healing by faith healers are common. The causes are poverty, ignorance but also the lack of dialogue between local knowledge and modern western medicine.

AIDS is also a serious social problem in the DR Congo, a major country in African continent according to vaultedwatches. The average number of people infected with HIV is 5.7% (according to UNAIDS 2018), although the data are not very reliable. In the urban catchment areas and regions affected by the war, the prevalence is significantly higher than in remote rural regions. AIDS patients have little prospect of treatment. Some aid organizations, such as Doctors Without Borders and various church organizations, are active with awareness-raising campaigns. To this end, people who are ready for an AIDS test are accompanied and advised. Concomitant diseases are also treated in AIDS patients.

Programs in which seriously ill AIDS patients are treated with life-prolonging antiretroviral drugs are only available in the capital Kinshasa and in a few other cities such as Bukavu (South Kivu Province) or Lubumbashi (Katanga Province). The Ministry of Health implements a national AIDS program together with the non-governmental organizations.

With the support of UNAIDS, an annual report on the HIV / AIDS situation is produced in the country. Thanks to the close cooperation with UNAIDS and other international organizations, at least the data situation on the HIV / AIDS situation has improved in recent years. However, implementing a national action plan remains difficult. A central problem is still the widespread stigmatization of people with positive status.

Cholera in the Democratic Republic of the Congo

The cholera in many areas, especially in the east and the Kasai region, endemic. Caused by the use of heavily polluted drinking water, illnesses occur frequently, especially in the rainy season. The aid organization Malteser International estimates the number of cholera deaths in 2017 at around 2,500 victims. The number of unreported cases is significantly higher. There were also increased diseases in regions that were previously considered cholera-free. The Ministry of Health counts cholera cases in 22 out of 26 provinces. The poor infrastructure and the armed conflicts mean that cholera patients cannot be supplied with life-saving infusions.

A measles epidemic is spreading again. In January 2020 there were already 6,000 dead; that is three times as many measles deaths as Ebola victims in the same period.

In cooperation with the World Health Organization (WHO), broad vaccination campaigns are implemented.

The problem is that remote regions cannot be reached and the armed conflicts, especially in the densely populated east of the country, are hindering vaccination campaigns.

Since March 2020, the number of Covid-19 infections has been increasing in the DR Congo, especially in Kinshasa with 96% of all registered corona cases that are concentrated in the city center. Neither about the disease nor about the numbers of those infected so far is adequately explained. Bad communication on a local and international level and the unreflective dissemination of messages via social networks are the reasons for this. However, since people experienced a similar situation during the Ebola epidemic a year ago, they are sensitized to measures to prevent the spread of such a disease.

The state of emergency has existed since March 27, 2020. The cities are isolated and there are strict travel regulations that are slowly being lifted. The supply of food to the people is dramatic. The population does not complain about the effects of the corona pandemic, hunger is much more dramatic, especially in areas where people were already living in food insecurity. Hundreds of thousands are already suffering from an acute shortage of staple foods and there is a threat of hunger riots.

The completely inadequate health system provides extremely inaccurate and inadequate data on the state of the pandemic. The Ministry of Health published the following figures for July 2020: