We have found 1 GMAT test centre in Trinidad and Tobago, located in San Fernando. For specific test dates of 2019, please refer to the end of this page. 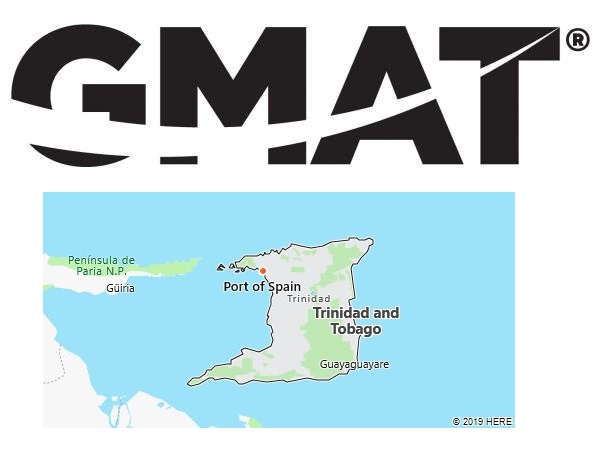 Unlike some paper based exams, the GMAT is computer based. Therefore, there are no fixed test dates for GMAT. Wherever you are in Trinidad and Tobago, all test centers are open from Monday through Saturday throughout the year. Some even offer the exam every day of the year.  However, some test centers are not open on Sundays and national holidays. For example, most college-based test centers might be closed for extended periods around holidays. For precise testing dates in Trinidad and Tobago, please visit test-maker website – https://www.mba.com/.

About Trinidad and Tobago

Island state located a short distance from the northeastern coast of Venezuela and made up of the islands of the same name. Trinidad and Tobago have had parallel but not equal histories: Trinidad, first Spanish and then English, was populated, with the end of slavery in the nineteenth century, by thousands of Indians brought to work on sugar cane plantations. Tobago became for a long time a base and refuge for the pirates who infested the routes of the Antilles; from the mid-eighteenth century, the British brought a large number of black slaves there for work on indigo plantations, sugar cane and cotton. Tobago was the first to become more autonomous from the United Kingdom: it soon had a legislative assembly, and in 1889 it was put to control nearby Trinidad. Independent since 1962, this small state has since shown to be able to sustain itself independently, despite the not always peaceful political situation and the often fluctuating conditions of the economic market.

Overall, more than 40% of the territory is still covered by forest but the distribution of wooded areas is irregular, mainly concentrated on the island of Tobago, where the vegetation is characterized by dense evergreen rainforests, where mangoes, tamarinds, l bread tree and various other essences. There is no lack of mangrove associations along the marshes and coastal lagoons. Trinidad is instead largely covered by plantations but on both islands it is possible to observe a large number of bird species (in particular the red ìbis and the cocrico, which is found exclusively on the island of Tobago, mammals (manatee, raccoon, armadillo, red monkey, aguti) and reptiles (alligators, caimans). The growth of tourism, intensive agriculture with the use of chemical fertilizers and industry together with the pollution of the coasts, caused by the discharges of the large ships that cross the sea area in front of the islands, are seriously damaging the coral reef., arable land and forests. The environmental authority established in 1995 has the task of monitoring that the development of the country takes place in respect of the local natural heritage by coordinating the activities of a series of agencies such as that for forests which also includes the fauna section and that for the national parks. The protected areas (10% of the surface) include, among other things, a national park (that of Maracas) and numerous oases and forest, wildlife and marine reserves.