We have found 3 GMAT test centres in South Korea, located in Busan, Daegu-Si, and Seoul. For specific test dates of 2019, please refer to the end of this page. 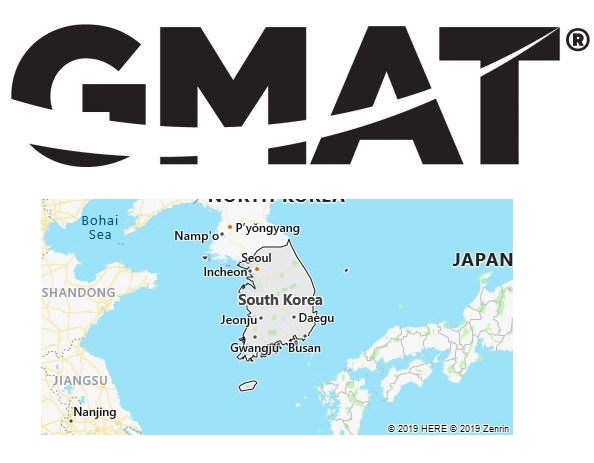 1. Get off at the Seomyun subway station.
2. Come out through the exit No. 2
3. Go straight approximately 500 meters.
4. Pass Judis Taehwa (Department store) on your left side and keep going straight.
5. You can see KEB HANA Bank on your left side before Kyobo building.
6. Our test center is placed on the 6th floor of the same building named A1 Plaza

This center is located in between the Lotte cinema Mankyung-kwan theare and the Kwak’s Hospital.
Parking is available at a paid car park near the test center. Please use public transportation whenever possible.
1. From other areas
Get off at Dongdaegu station (KTX) – subway, bus / taxi(15 minutes)
Get off at Daegu station (Saemaeul, Mugunghwa) – 11 minutes on foot
2. Using the subway
(Line 1) Jungangro Station Exit 1 of Daehyun Freemall – 7 minutes walk to Kwak’s Hospital.
(Line 2) Banwol-dong Station Exit 15 – 12 minutes walk to Kwak’s Hospital.
(Line 3) Seomun Market Station Exit 1 – 12 minutes walk to Kwak’s Hospital.
3. Using the bus
Get off at the Mankyung-kwan station or Kwak’s Hospital station.
Bus No:
1. Kwak’s hospital station : Red Bus(geuphang1, geuphang3, geuphang5, geuphang6), 156, 309, 425, 524, 623, 724
2. Mankyung-kwan station : 234, 240, 323, 939
– Studying IS NOT allowed in the test center
– The test center must arrive at least 15 minutes before the start of the test.
– Examination change and cancellation are different for each test provider.
– Please be sure to re-check if you change or cancel your exam. In many cases, the application can not be completed.
If you have any questions about other test centers, or for inquiries regarding the examination, please inquire for each manager.
Phone No 053)421-2460
Email : [email protected]
Thank you.

Unlike some paper based exams, the GMAT is computer based. Therefore, there are no fixed test dates for GMAT. Wherever you are in South Korea, all test centers are open from Monday through Saturday throughout the year. Some even offer the exam every day of the year.  However, some test centers are not open on Sundays and national holidays. For example, most college-based test centers might be closed for extended periods around holidays. For precise testing dates in South Korea, please visit test-maker website – https://www.mba.com/.

From 1910 until the end of World War II in 1945, Korea was occupied by Japan. With the beginning of the East-West conflict, the country split into North Korea and South Korea in 1948. In the Korean War (1950–53), on behalf of the United Nations (UN), the United States and other countries supported South Korea against North Korea and its ally, the People’s Republic of China. The war left several million dead and great destruction. It ended in a truce and peace negotiations failed. To this day, a heavily fortified and closely guarded armistice line near the 38th parallel separates the two states. Check behealthybytomorrow to see Asia Early History.

It was not until the beginning of the 1970s and the beginning of the 1990s that inter-Korean government contacts were made again. In 2000 the heads of state visited each other for the first time. In the period that followed, the first meetings of separated families were possible, which had been separated by the Korean War. South Korean companies built a tourism center in North Korea and an industrial zone in the border town of Kaesŏng. However, they are now closed again. The North Korean nuclear weapons program and military incidents hampered lasting understanding.

The first President of South Korea Rhee Syngman (from 1948) ruled authoritarian. After student unrest, he was overthrown by the military in 1961. The junta secured its power with the help of the secret service and suppressed the opposition. Protests forced a return to democracy in 1987. But it wasn’t until 1990 that an opposition politician, Kim Young Sam (* 1927, † 2015), was elected president. Gradually, reforms were implemented that curtailed the influence of the military. With Kim Dae Jung (1998-2003) began a cautious approach to North Korea.

Accusations of corruption have repeatedly led to internal political tensions and mass protests. In 2004 and again in 2016, parliament tried to remove the head of state. In 2004, however, the constitutional court reinstated Roh Moo Hyun (* 1946, † 2009). President Park Geun Hye (* 1952) remained deposed. In 2018, she was sentenced to 24 years in prison for bribery and abuse of power. Park was one of the Conservatives who ruled the country from 2008-18. With the election of Moon Jae In (* 1953) as President (2017) there was a change of power to the Democratic Party.