We have found 1 GMAT test centre in Lithuania, located in Vilnius. For specific test dates of 2019, please refer to the end of this page. 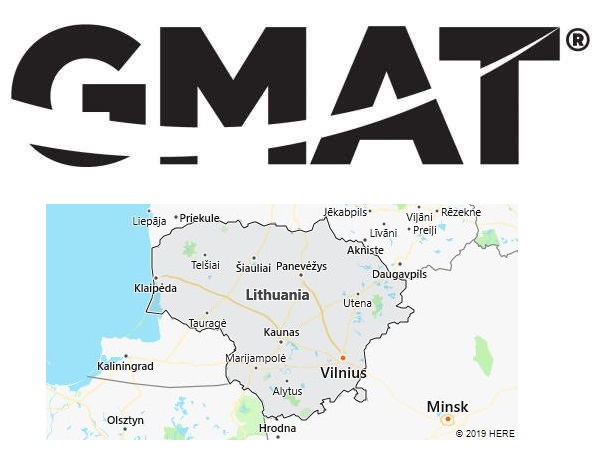 Directions to IT Protraining

Dear Candidate!
We are pleased to welcome You to Protraining Academy UAB! Please review the directions, how to find us.
Please, feel free to call us for any assistance by telephone +370-5-2105044 or email [email protected]
Wishing You best luck on exam,
ProTraining team

Unlike some paper based exams, the GMAT is computer based. Therefore, there are no fixed test dates for GMAT. Wherever you are in Lithuania, all test centers are open from Monday through Saturday throughout the year. Some even offer the exam every day of the year.  However, some test centers are not open on Sundays and national holidays. For example, most college-based test centers might be closed for extended periods around holidays. For precise testing dates in Lithuania, please visit test-maker website – https://www.mba.com/.

According to the constitution, which came into force on November 6, 1992, Lithuania is a republic with a mixed parliamentary-presidential system. The head of state is the president, who is directly elected for a period of 5 years (re-election possible once). It has foreign policy authority, can dissolve parliament and call new elections, has the right to initiate laws and can veto suspensive decisions against legislative decisions. The highest legislative body is the parliament (Seimas; legislative period 4 years). Of the 141 MPs, 71 are elected by majority vote and 70 by proportional representation (active voting rights from 18 years of age, passive from 25 years of age). A threshold of 5% applies to political parties and 7% to electoral alliances. The executive rests with the government under the chairmanship of the Prime Minister, who is appointed by the President with the consent of Parliament and charged with forming a government. The constitutional court with 9 judges (elected by parliament for 9 years; re-election is excluded) monitors compliance with the constitution.

The national flag from the time of the First Republic (1918–40) was reintroduced on November 18, 1988 and is yellow over green and red stripes. Yellow symbolizes the color of the ripening wheat and the riches of agriculture, green is supposed to remind of the forests and the hopes of the people and red of the flowers and the love of the people for the land.

The coat of arms, reintroduced on March 20, 1990, has been documented since the 14th century. In the red shield it shows a silver knight (Vytis or Vyciai) sitting on a soaring silver, blue-bridled horse, who wields a silver sword with a gold handle on the right and a blue shield with a gold double cross (patriarchal cross) on the left.

The national holiday on February 16 commemorates the founding of the Republic of Lithuania in 1918. March 11 celebrates the regaining of independence (1990). July 6th is the date of the founding of the state (1253; coronation of Grand Duke Mindaugas). Check petwithsupplies to see Brief Information About Lithuania.

The total strength of the army is about 11,500 men. The army (around 8,200 soldiers) is divided into an infantry brigade, several battalions and other support groups. The air force has around 1,000 and the navy around 530 men. In 2015, parliament decided to reintroduce compulsory military service, which was abolished in 2008. Lithuania has been a member of NATO since 2004. To increase the security of Lithuania, NATO Secretary General J. Stoltenberg opened the NATO Forces Integration Unit (NFIU) Vilnius on September 3, 2015. On July 8, 2016, a NATO summit in Warsaw decided to increase troops in Eastern Europe. In this context, it was agreed to station a German-led multinational battalion with around 1,000 soldiers in Lithuania.

The media landscape is diverse and reflects a wide range of opinions.

News agencies: The state-run Lithuanian Telegraph Agency (ELTA) was privatized in 1998. A second private agency is the Baltic News Service (BNS), which also operates in the other Baltic states.