We have found 2 GMAT test centres in Lebanon, located in Beirut. For specific test dates of 2019, please refer to the end of this page. 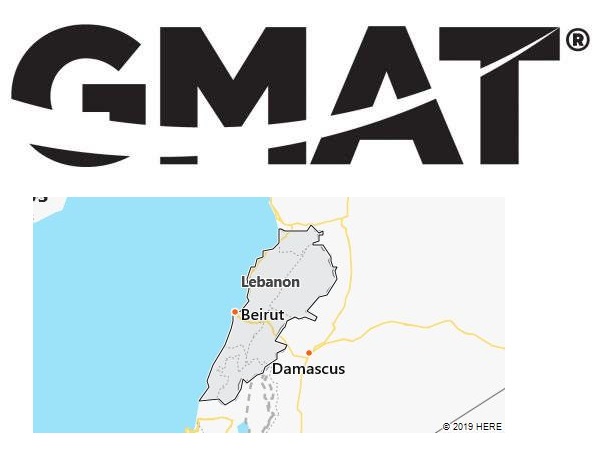 Corner of Sami El Solh Blvd and Badaro Street, across the street from OMT

Unlike some paper based exams, the GMAT is computer based. Therefore, there are no fixed test dates for GMAT. Wherever you are in Lebanon, all test centers are open from Monday through Saturday throughout the year. Some even offer the exam every day of the year.  However, some test centers are not open on Sundays and national holidays. For example, most college-based test centers might be closed for extended periods around holidays. For precise testing dates in Lebanon, please visit test-maker website – https://www.mba.com/.

Until the outbreak of civil war (1975), Lebanon, despite its mountainous nature, was one of the most dynamic and highly developed states among the Arab countries. The social and economic infrastructure was largely destroyed in the civil war; many Lebanese emigrated. Beirut lost its role as the most important financial, trade and service center in the Middle East. It was not until the 1990s that the economy began to grow again significantly, mainly due to foreign financial aid. Reconstruction progressed rapidly. The gross national income, which has since fallen to (1985) US $ 800(GNI) per resident again reached US $ 4,040 in 2003 and US $ 8,310 in 2017. The armed conflict between Hezbollah and Israel in 2006 represented a serious setback, in the course of which there was severe damage and destruction, especially in the southern districts and suburbs of Beirut, the southern parts of the country and the entire infrastructure. In 2007, Lebanon received further financial commitments amounting to billions, with the announcement of a structural reform program to advance reconstruction and avert the threat of national bankruptcy. In the following years the economy grew by 7% to 8%, mainly driven by tourism, banking and the construction industry. As a result of the civil war in Syria and the refugee crisis, economic growth fell to 1.0% in 2016. A big problem is the high national debt,

Foreign trade: The foreign trade balance has been in deficit for years (import value 2017: 18.0 billion US $; export value: 4.1 billion US $), but is partly offset by transfers from Lebanese migrant workers and foreign exchange income from tourism. The most important export goods are precious stones, metals and electrical appliances. The main imports are crude oil, machines, chemical products and vehicles. The main supplier countries are China, Italy, the USA, Germany and Greece, the main buyers are the Republic of South Africa, the United Arab Emirates, Saudi Arabia and Syria.

Intensive agriculture contributes 4.5% to GDP (2016). About half of the agricultural area is in the Beka. Fruit growing (coastal plain, mountain slopes) is important with its specialization in citrus fruits, table apples and grapes. However, agricultural production can only cover a third of domestic demand. The semi-nomadic pasture economy (sheep, goats) is becoming less important.

The service sector is the most important economic sector; it has a share of (2016) 80.8% of GDP. Already traditionally a hub in the oriental trade, Lebanon became the interface between western industrial nations and the Arab states. The service sector was particularly hard hit by the civil war, but trust, especially in the banking center of Beirut, slowly returned. With the reconstruction of the port and city center of Beirut and the repair of telecommunications systems, Lebanon gradually regained its former position by 2006. Wholesale and corporate representatives returned from Athens, Amman and Cyprus.

Tourism: Tourism, one of the main branches of the economy until 1975, had almost completely come to a standstill as a result of the civil war. It has gradually been gaining in importance again since 2006, but has again suffered serious setbacks as a result of the Syrian crisis. While 2.17 million foreign visitors came to the country in 2010, it was only 1.3 million in 2013. Tourism is concentrated on the historical sites of Baalbek, Byblos and Tyros as well as on the capital Beirut; the slopes of the Lebanon Mountains are popular summer resorts for wealthy residents of the Gulf States. Check handbagpicks to see Cheap Travel Destinations in Asia.

Almost the entire industrial sector, including the construction industry, has a share of (2016) 14.7% of GDP, has been privatized (gemstone cutting, textile and food industries). Lebanon has only limited natural resources (iron ore, copper, asphalt, pyrite, lignite, phosphates, manganese and chromium); around 80% of the raw materials required have to be imported. The refineries in Tripoli and Saida process oil from Saudi Arabia and Iraq, respectively. The country has great hopes for the development of oil and gas reserves off the coast.