We have found 1 GMAT test centre in Kenya, located in Nairobi. For specific test dates of 2019, please refer to the end of this page. 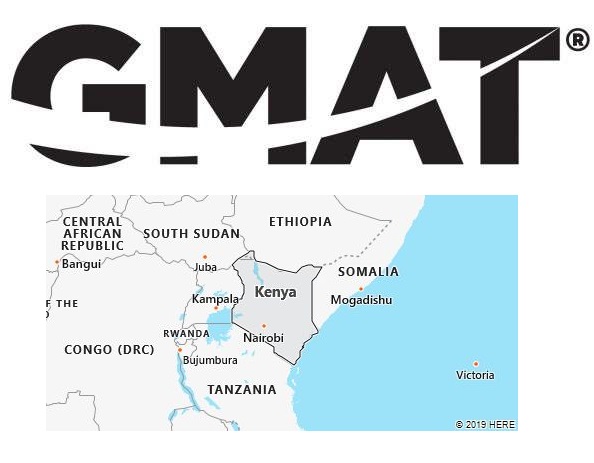 Uniserv Ltd is located on the 9th Floor of Fortis Tower which is along Woodvale Grove, Westlands, Nairobi. The building is opposite ABC Bank, Bacchus Club and Havana Lounge and also in close proximity ot Bandari Plaza and Sound Plaza. Westlands Post Office is also within minutes of the building.

Unlike some paper based exams, the GMAT is computer based. Therefore, there are no fixed test dates for GMAT. Wherever you are in Kenya, all test centers are open from Monday through Saturday throughout the year. Some even offer the exam every day of the year.  However, some test centers are not open on Sundays and national holidays. For example, most college-based test centers might be closed for extended periods around holidays. For precise testing dates in Kenya, please visit test-maker website – https://www.mba.com/.

Kenya is a multiethnic state with around 40 ethnic groups that differ greatly from one another linguistically and culturally. The main groups are the Bantu-speaking peoples, including Kikuyu (17%), Luhya (14%), Kamba (10%), Meru (4%) and Kisii (6%). Swahili, a Bantu language interspersed with numerous Arabic loan words, has been the official language of Kenya since 1974. The Luo (10%), Nandi (13%), Masai and Turkana belong to the Nilots, the Somal to the Cushites (6%). Before the country gained independence, there was a strong white settler class in the climatically favorable highlands. Today around 30,000 Europeans, 90,000 Asians (Indians, Pakistanis) and 40,000 Arabs still live in Kenya. Due to ethnic conflicts, droughts and floods, there are repeated movements of refugees. It is estimated that over 450,000 Kenyans live abroad (including in Great Britain, Tanzania, the United States, Uganda and Canada). On the other hand, there are (at the end of 2017) 506 900 refugees from neighboring countries in Kenya, mainly from Somalia.

With a few exceptions, the Masai are the only ethnic group in Kenya to live fully nomadic as cattle herders. On the other hand, they regard other forms of employment such as agriculture, fishing or hunting as inferior. In their external appearance – slim and tall – the Masai differ significantly from the neighboring ethnic groups.

Masai society is divided into patrilineal ancestry groups; the male members are organized according to clearly defined age groups (boys, warriors and elders). Girls are often promised to marry their fathers before they are born. From the age of about seven, the boys tend the herds of cattle. When they are 15 to 20 years old, they retire to their own warrior villages, where they are instructed in their duties. Every five years there is a circumcision festival for a larger group of young men who, regardless of their age, together form an age group and thus a warrior group. The warriors (»Illmuran«) paint their bodies with red clay, their hair is also dyed red and tied in an artistic braid. The hair is only shaved after the marriage. Masai are allowed to marry when they are around 30 years old, if they have proven their bravery. Elderly and respected men form a council that regulates the affairs of the Masai.

Due to their tight military organization and their raids and war expeditions, the Masai used to be the horror of neighboring ethnic groups and the European colonial powers. In the 19th century they controlled a vast area from Lake Victoria to the Indian Ocean. A devastating rinderpest in 1890 put an end to its spread and some groups started working on the soil. Despite the difficult pasture management and the resulting conflicts with neighbors who cultivate the land, the Masai hold on to cattle breeding and the nomadic way of life, so that they are still deeply rooted in their traditions.

The average population density is (2018) 90 residents / km 2. The main areas of settlement are the highlands with high rainfall and the southern coastal lowlands, where around half of the population live on just 6% of the area. The largest metropolitan area is Nairobi with the sprawling slums on the edge of the metropolis. Other important urban centers are Mombasa, Nakuru, Eldoret and Kisumu. Overall, the share of the urban population is (2017) 26%. Check healthvv to see Kenya a Country of Huge Cities and Magnificent National Parks.

The biggest cities in Kenya

Social: Around half of the population lives below the poverty line. In rural areas in particular, there is a great lack of medical care, medical facilities and reliable drinking water supplies. The HIV infection rate ( AIDS ) among adults is still very high at 4.8% (2017).

Despite the legal prohibition, women and children are still often affected by sexual violence, forced labor and human trafficking. In 2011 female genital mutilation was also banned by law; however, it is still widespread, especially in rural areas. Male homosexuality is officially banned in Kenya and is socially outlawed.