We have found 2 GMAT test centres in Kazakhstan, located in Almaty. For specific test dates of 2019, please refer to the end of this page. 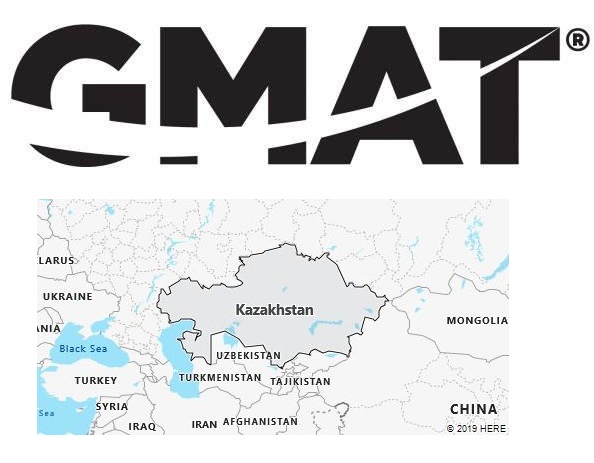 Unlike some paper based exams, the GMAT is computer based. Therefore, there are no fixed test dates for GMAT. Wherever you are in Kazakhstan, all test centers are open from Monday through Saturday throughout the year. Some even offer the exam every day of the year.  However, some test centers are not open on Sundays and national holidays. For example, most college-based test centers might be closed for extended periods around holidays. For precise testing dates in Kazakhstan, please visit test-maker website – https://www.mba.com/.

Kazakhstan has 18.3 million residents (2018), which is only slightly more than the Netherlands. With 7 residents / km² (Germany 237 residents / km²) Kazakhstan is one of the countries with the lowest population density in the world. Kazakhstan is a multi-ethnic state with over 100 different peoples. That is why the term “Kazakhstan” was introduced. This means all people who have Kazakh citizenship. The majority (68%) belong to the Kazak people. The Russians, who mainly live in the north of the country, make up the second largest group with 19%. Other peoples such as Uzbeks, Ukrainians, Tatars, Uighurs and Germans form small minorities that comprise less than 3% of the population. Towards the end of World War II, Germans and Crimean Tatars were on the orders of J. Stalin deported to Kazakhstan. Most of them left the country again after the collapse of the Soviet Union (1991).

The Kazakhs are Sunni Muslims. Many Russians belong to the Russian Orthodox Church. The population lived nomadically until the 1930s. Shamanistic ideas have survived from this time. In the country there is also a marriage between a man and several women. However, this is prohibited by law. From the 1930s onwards, the Soviet government under J. Stalin forced the nomads to settle down. Many people moved to the cities. The proportion of city dwellers in the total population is 57% (Germany: 77%).

Kazakhstan is a presidential republic. At the head of the state is the president, who is directly elected for seven years. President Nursultan Nazarbayev (* 1940) ruled from independence from the Soviet Union in 1991 until his resignation in 2019. He has expanded his power considerably. The president determines the guidelines of politics and can dissolve parliament. Legislation is the responsibility of the parliament, which consists of two chambers. Here, however, only politicians are represented who are close to the president and his party »Nur Otan« (German: Light of the Fatherland). The new President Kassym-Shomart Tokayev (* 1953), who has been in office since March 2019, belongs to the »Nur Otan« party. International organizations such as the OSCE or Amnesty International classified the election as “not free” and “not fair” and accused those in power of violating human rights.

In terms of foreign policy, Kazakhstan maintains very close ties with Russia, with whom it cooperates in the economic and military fields. In addition, Kazakhstan is making efforts to improve foreign policy contacts with other countries, especially China. Kazakhstan is a member of the OSCE, the NATO initiative “Partnership for Peace” and the CIS.

In Kazakhstan, all students have to attend twelve-year middle school. There is a pre-school upstream, but there are not enough places for every child. The middle school is divided into a four-year lower level, a five-year main level and a three-year upper level. Depending on the region, the language of instruction is Kazakh or Russian, occasionally also Uzbek. At every school, however, the languages ​​Kazakh, Russian and English are compulsory subjects that cannot be deselected.

After successfully completing the upper level, the young people can begin vocational training or, after passing the entrance exam, study at university. Higher education takes place at universities, academies and institutes. Kazakhstan has over 100 state and private universities. The Kazakh education system is well developed compared to other Central Asian countries. The weak points are the lack of practical relevance in the training and a lack of skilled workers. The German-Kazakh University in Almaty trains students with a high level of practical relevance.