We have found 1 GMAT test centre in Israel, located in Ramat Gan. For specific test dates of 2019, please refer to the end of this page. 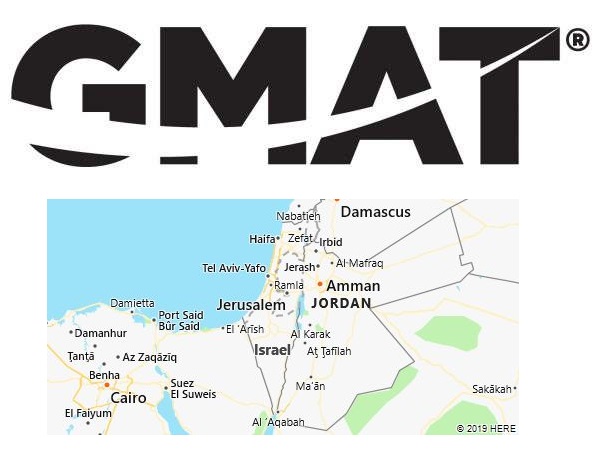 PLEASE ARRIVE AT THE TEST CENTRE 30 MINUTES BEFORE YOUR EXAM APPOINTMENT with a PASSPORT as identification PLUS any additional id requested by the exam sponsor.
Please note: Any jewellery or hair clips larger than 1/4 inch – 1/2 cm, , is not permitted in the testing room, you will be asked to store them in a locker at the testing centre. Thank you

BY CAR
Exit Ayalon Highway at Haalacha Junction to direction Ramat Gan.
Turn into Bialik Street.
At 3rd traffic light turn left into Abba Hillel Silver St.
Continue along Abba Hillel for approximately 1.7km until Ben Gurion Road
The building is on the right of Ben Gurion. Number 2 Ben Gurion Road (BSR Building no 1).
Pearson Professional Center is on the 9th floor.
From Road number 4 exit at Petah Tiqua/Ramat Gan Junction and turn into Jabotinsky St towards Ramat Gan. Turn right into Ben Gurion Road and Test Center is on the left- corner of Ben Gurion and Abba Hillel Road.
Note that the Building is located close to the Ayalon Shopping Mall.
PARKING is available on the corner of Abba Hillel/ Ben Gurion in the parking lot of the Ramat Gan Soccer Stadium/Ayalon Mall. Entrance at traffic light at the Ayallon Mall in Abba Hillel St . Turn left to end. NOTE MOBILE PHONES ARE TO BE SWITCHED OFF WHEN YOU ARRIVE AT THE CENTER AND NOT ACCESSED UNTIL YOU LEAVE AFTER THE TEST. PLEASE TAKE THIS IN TO ACCOUNT WHEN PARKING.
Direct Buses from Jerusalem 401, 400 or 402

Unlike some paper based exams, the GMAT is computer based. Therefore, there are no fixed test dates for GMAT. Wherever you are in Israel, all test centers are open from Monday through Saturday throughout the year. Some even offer the exam every day of the year.  However, some test centers are not open on Sundays and national holidays. For example, most college-based test centers might be closed for extended periods around holidays. For precise testing dates in Israel, please visit test-maker website – https://www.mba.com/.

There is general compulsory schooling for children from 6 to 16 years with free lessons. There is an open pre-school offer for all children from the age of 2 (not compulsory). The primary level (1st to 6th grade) is followed by the secondary level (7th to 12th grade; divided into three-year lower and upper grades). In the upper level, students can choose between an academic, technological, agricultural or military-oriented branch. The final exam, comparable to the German Abitur or the Austrian Matura, is called Bagrut. In addition to the general state schools, there are state-religious and non-state Arab schools as well as private schools with different sponsorships. In the tertiary sector there are eight state universities – including the Tel Aviv Open University (Open University of Israel, founded in 1974), the Technion (Israeli Institute of Technology, founded in 1924) in Haifa and the Hebrew University of Jerusalem (founded in 1925) – as well as a variety of academic universities Colleges and colleges. There are special language schools for immigrants that offer intensive courses in Hebrew.

There is freedom of expression and freedom of the press in Israel. However, the issue of national security is subject to military censorship. Journalistic activity in the occupied territories is partially restricted.