We have found 2 GMAT test centres in Greece, located in Athens and Thessaloniki. For specific test dates of 2019, please refer to the end of this page. 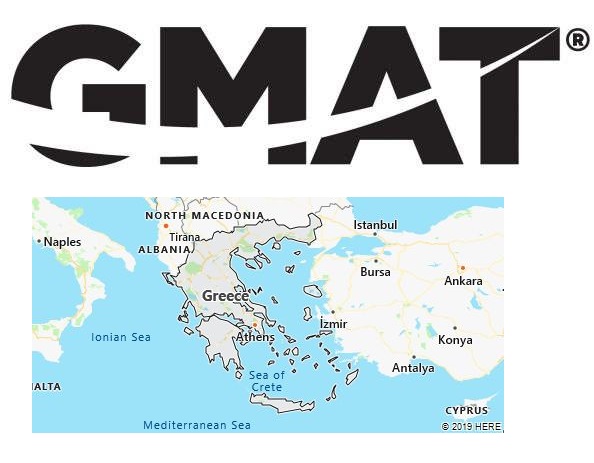 BY METRO
take metro line 3 (Aghia Marina – Doukissis Plakentias) and get off at the station Ambelokipi. Walk down Soutsou, turn left into Tsocha and at the end of the road, turn left into Leoforos Vasilissis Sofias. Across the road you will see Athens Towers. Pearson Professional Center is located on the 4th floor of block B, the small tower.

Unlike some paper based exams, the GMAT is computer based. Therefore, there are no fixed test dates for GMAT. Wherever you are in Greece, all test centers are open from Monday through Saturday throughout the year. Some even offer the exam every day of the year.  However, some test centers are not open on Sundays and national holidays. For example, most college-based test centers might be closed for extended periods around holidays. For precise testing dates in Greece, please visit test-maker website – https://www.mba.com/.

According to the constitution that came into force on June 11, 1975 (amended several times), Greece is a parliamentary republic. The head of state is the president elected by parliament for a period of five years (one-time re-election is permitted), whose powers were essentially limited to representative functions in 1996. He represents the state under international law, is the commander-in-chief of the armed forces, drafts the laws passed by parliament and, under certain conditions, can dissolve parliament. Ekaterini Sakellaropoulou has been President of the Republic since January 22, 2020.

The executive rests with the government, which requires the confidence of parliament. The President appoints the Prime Minister and, on his proposal, the other members of the Cabinet. The highest legislative body is the National Assembly (300 members, elected for 4 years; 250 members are elected according to proportional representation; the strongest party receives 50 seats as a bonus, this rule will be abolished in the next election). In order to receive a parliamentary mandate, a party must win at least 3% of the valid votes. The active right to vote begins at 17 years of age, the passive at 25 years of age; Elective is compulsory up to the age of 70. Parliament can remove the president (with a two-thirds majority) and impose a state of emergency. After the early parliamentary elections on 7.7. 2019 took over Kyriakos Mitsotakis from the conservative Nea Dimokratia (ND) party took over the post of Prime Minister from A. Tsipras from the left-wing SYRIZA party.

Domestic policy: The consolidation of the national budget through a rigorous austerity policy is showing initial successes, so that Greece was able to leave the international rescue package in 2018. At the same time, however, broad sections of the population are affected by a considerable reduction in prosperity and social hardship. The refugee problem has been significantly alleviated by the EU-Turkey Agreement (2016). Unsustainable conditions in the initial reception camps have not yet been sufficiently improved.

Foreign policy: After the resolution of the name dispute with the neighboring republic of North Macedonia (2018), Greece maintains friendly relations with all southern European countries. Foreign policy problem areas are the high number of illegal immigrants from Albania and the unresolved Cyprus issue in relation to Turkey. Greece has been a member of NATO since 1952 (membership suspended from 1974–80), the European Union since 1981 and the euro zone since 2001. Check thenailmythology to see The Best of Greece.

Around a quarter of the workers are unionized. The union structures are extremely fragmented. The two largest umbrella organizations are the General Confederation of Greek Workers (GSEE; founded in 1918) and the Supreme Federation of Associations of Public Employees (ADEDY; founded in 1947).

The total strength of the conscription army (maximum service period 9 months) is 142,400, that of the paramilitary forces (coast guard) 4,000 men; around 950 soldiers are stationed in Cyprus. The army, which is divided into four corps (93,500 soldiers), has five light infantry divisions, five independent tank and infantry brigades, seven mechanized brigades, one airmobile brigade and other combat and combat support units at regimental and battalion level. The Air Force has 18,800 and the Navy 14,200. The country is a member of NATO.