We have found 1 GMAT test centre in Ethiopia, located in Addis Ababa. For specific test dates of 2019, please refer to the end of this page. 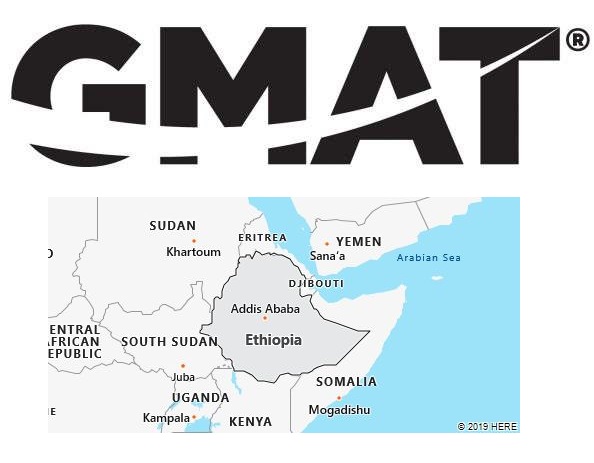 From Meskel Square: Take DebreZeit road and proceed on till Lancia & Co – You’ll see Zefco Building just in front of Lancia.
OR ask a taxi driver to take you to Zefco Dabo or Bilo’s Cafe – we’re in the same building.

Unlike some paper based exams, the GMAT is computer based. Therefore, there are no fixed test dates for GMAT. Wherever you are in Ethiopia, all test centers are open from Monday through Saturday throughout the year. Some even offer the exam every day of the year.  However, some test centers are not open on Sundays and national holidays. For example, most college-based test centers might be closed for extended periods around holidays. For precise testing dates in Ethiopia, please visit test-maker website – https://www.mba.com/.

The constitution, which came into force on August 22, 1995, defines Ethiopia as a parliamentary republic with a federal system. It guarantees the various ethnic population groups extensive autonomy and grants the regional states (Kilil) formed on the basis of ethnic criteria (language regions and settlement areas) the right to leave the state association (secession law), provided that a majority of the population votes in favor of it in a referendum. Head of state with predominantly representative tasks is the president elected by parliament for a period of 6 years (re-election possible once). This office has been held by the independent professional diplomat Sahle-Work Zewde since 2018. Executive power rests with the Prime Minister, who appoints the members of the cabinet, has political authority and is the commander-in-chief of the armed forces. Abiy Ahmed has been the head of government since 2018. As the first prime minister in the country’s history, he comes from the Oromo ethnic group, which makes up around a third of the population. Abiy pursues a policy of reconciliation between the national ethnic groups as well as rapprochement with the neighboring state and temporary war opponent Eritrea. The new political course also includes democratic reforms, an intensified fight against corruption and the continuation of economic openness.

The legislative body at federal level is the bicameral parliament (Shengo; legislative period 5 years), consisting of the council of people’s representatives (a maximum of 550 members, directly elected) and the federal council, whose 135 members represent all recognized ethnic groups. The 9 regional states have their own constitutions and separate legislative and executive bodies.

As a regional power, Ethiopia seeks contact and exchange with the states in the Horn of Africa and with the western donor countries as well as with China, India and Turkey. As a member state of the UN, Ethiopia is involved in international peace operations in Sudan, South Sudan and Somalia. The country plays a leading role in the African Union and in regional associations such as the East African development organization IGAD (Inter-Governmental Authority on Development). For the state bordering the Nile, the controversial question of the distribution of the Nile water is of great importance. In addition to Ethiopia, Sudan and Egypt in particular lay claim to the use of the river.

The most influential force within a broad spectrum of parties is the alliance Ethiopian People’s Revolutionary Democratic Forces (EPRDF; founded in 1988), which is dominated by the Tigray People’s Liberation Front (TPLF; founded in 1975); other members are v. a. the Amhara National Democratic Movement (ANDM), the Oromo People’s Democratic Organization (OPDO) and the Southern Ethiopian People’s Democratic Movement (SEPDM). Opposition alliances are the Coalition for Unity and Democracy (CUD; founded 2004) and the Ethiopian Federal Democratic Unity Forum (forum; founded 2008). The political room for maneuver of oppositional forces is severely restricted by state repression.

The Confederation of Ethiopian Trade Unions (CETU) is the umbrella organization of eight individual trade unions.

Ethiopia is divided into 9 regional states as well as the two urban regions of the capital Addis Ababa and the city of Dire Dawa. Check handbagpicks to see Ethiopia Travel Guide.

The court structure consists of federal courts with a Supreme Federal Court and the High Federal Court as well as courts of the regional states. The independence of the judiciary was formalized for the first time in the new constitution. – The legal system is based on modern statutory law, alongside local customary law, which is based on the traditional self-government of local groups and regions.