We have found 2 GMAT test centres in Egypt, located in Cairo. For specific test dates of 2019, please refer to the end of this page. 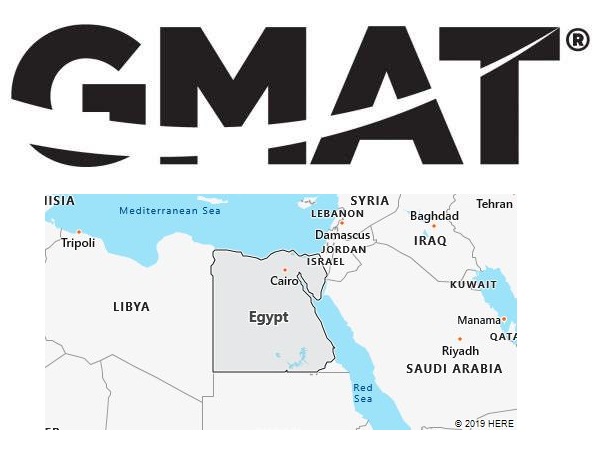 16 Mustafa Refaat Street, block1137, Sheraton Buildings, Heliopolis
for any question you can contact us through.
[email protected]
http://www.globalknowledge.com.eg/pdf/Sheraton%20map.pdf

#2. The American University in Cairo

Location:
AUC New Cairo campus: at the end of Road 90, Fifth District, New Cairo City.
Enter AUC from Gate 4, go to “SSE Building”, then find Room P007 in the ground floor, at the unit of Engineering and Science Services.

Unlike some paper based exams, the GMAT is computer based. Therefore, there are no fixed test dates for GMAT. Wherever you are in Egypt, all test centers are open from Monday through Saturday throughout the year. Some even offer the exam every day of the year.  However, some test centers are not open on Sundays and national holidays. For example, most college-based test centers might be closed for extended periods around holidays. For precise testing dates in Egypt, please visit test-maker website – https://www.mba.com/.

The population is 99% Egyptians. Religion group of Copt (estimated population about 10%) survived primarily in Upper Egypt and in the cities. The ethnic minority of around 100,000 Nubians (with their own language) has lost its historical settlement area due to the flooding of the Nasser Reservoir and has been partially resettled in Kom Ombo in Upper Egypt. A large number of them also live in the cities (especially in Cairo and Alexandria). Bedouins continue to live in the desert fringes, whose nomadic way of life and economy differs from the settled farmers (Fellachen) of the Nile Valley. Furthermore, smaller groups of Greeks, Italians and Sudanese as well as Berbers (Siwa oases) are resident in Egypt. Check printerhall to see Emigration to Egypt.

The written language is modern standard Arabic, the colloquial language is an Egyptian-Arabic dialect; English and, to a lesser extent, French are widely used as business and educational languages.

Social: The population density (2017) averaged 98 residents / km 2, in the cultivated and inhabited country around 1,120 residents / km 2. 43% of the population (2017) live in cities, around half of them in the megacities of Cairo, Alexandria and Giza. The strong influx from the countryside to the cities, especially to Cairo, creates major social problems. Many Egyptians, especially those with skilled professions, work abroad, especially in rich Arabic-speaking countries.

The biggest cities in Egypt

In Article 2, the constitution defines Sunni Islam as the state religion and Islamic law as the main source of legislation, but in Article 46 it also guarantees the right to freely practice religion based on non-Islamic beliefs. The religious communities are subject to state control by the Ministry of Religious Affairs. The President appoints the Grand Mufti, the spiritual head of the Egyptian Muslims. Of paramount importance as the spiritual center of Sunni Islam is the Azhar University in Cairo, whose legal opinions are recognized by the Sunnis as authoritative for the interpretation of the Islamic tradition.

Around 90% of the population are predominantly Sunni Muslims (Shiites: less than 1%), in Upper Egypt mainly the Maliki school, in Lower Egypt the Shafiite school of law. Sufi brotherhoods are traditionally of great importance. Christians make up about 10% of the population. The majority of them belong to the Coptic Church except for the members of the Catholic-Coptic Patriarchate of Alexandria and those of the Reformed “Evangelical Church – Synod of the Nile” (also: “Coptic Evangelical Church in Egypt”). In addition, there are small religious communities of Protestant, Catholic (7 rites) and Greek Orthodox Christians (Greek Orthodox Patriarchate of Alexandria) as well as Jehovah’s Witnesses and Baha’i. The historical roots (church planting) of the two once important Jewish communities in Egypt go back to the 4th century BC. (Alexandria; later made famous by the Septuagint and Philo of Alexandria) and the 10th century AD (Cairo; made famous in the Middle Ages by Maimonides). Today the Jewish community has fewer than 100 members (1948: around 75,000).