We have found 1 GMAT test centre in Dominican Republic, located in Santo Domingo. For specific test dates of 2019, please refer to the end of this page. 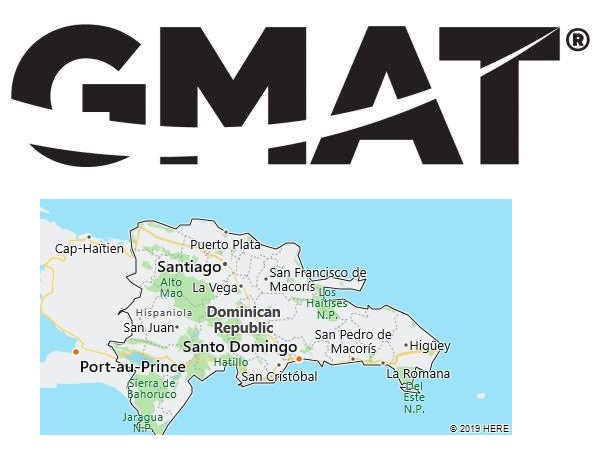 Unlike some paper based exams, the GMAT is computer based. Therefore, there are no fixed test dates for GMAT. Wherever you are in Dominican Republic, all test centers are open from Monday through Saturday throughout the year. Some even offer the exam every day of the year.  However, some test centers are not open on Sundays and national holidays. For example, most college-based test centers might be closed for extended periods around holidays. For precise testing dates in Dominican Republic, please visit test-maker website – https://www.mba.com/.

The Dominican economy is primarily based on tourism, mining and agriculture. Important sources of income are the transfer payments from the Dominicans living abroad and the export profits from the free trade zones. With a gross national income (GNI) of (2018) 7760 US $ per resident, the Dominican Republic one of the highest growth rates Latin America s on (2016: 6.6%; 2017: 4.8%). Problematic for economic development are the one-sided ties to the USA as a trading partner, a trade balance that has been negative for years, and the increase in foreign debt to US $ 16.8 billion (2016).

Foreign trade: The foreign trade deficit (import value 2016: 17.8 billion US $; export value: 8.7 billion US $) is mainly due to imports of consumer goods, raw materials and semi-finished products. Most of the imports come from the USA, followed by China, Mexico, Venezuela, Trinidad and Tobago. Most of the exports also go to the USA, followed by Haiti and Canada. The most important export goods are the products of the free trade zones as well as gold and agricultural products. The Dominican Republic is now the largest exporter of organic agricultural products in Central America.

Gold and silver alloys (extraction of gold and silver ore in the west of the Cordillera Central and in the province of El Seibo) are economically important. Gypsum, rock and sea salt as well as copper ore and bauxite are also mined, albeit to a limited extent.

Agriculture contributes 6.1% to the gross domestic product (GDP) (2016) and employs around 13% of the workforce. Their main export products are sugar, cocoa and tobacco. The sales of the traditional export product coffee are now exceeded by the sales of bananas, avocados and chillies.

48.7% of the land area is used for agriculture. Most of the cultivated area is concentrated in the hands of a few large landowners or is state-owned. Attempts at land reform in favor of numerous small businesses (mini-fundies), which mostly grow basic foodstuffs (especially rice, maize, beans, vegetables), have so far been unsuccessful. The center of sugar cane cultivation, for which mainly Haitian seasonal workers are used, is the eastern region of the country; the main vegetable growing area is mainly in the Valle de Cibao in the north central region.

The industrial sector (including mining and construction) contributes 26.1% to the gross domestic product (GDP) (2016) and employs around 17% of the workforce. Food (especially sugar) and beverages, petroleum and chemical products are produced. The final production of textiles, pharmaceutical articles and electronic parts mainly takes place in free trade zones.

The Dominican Republic developed into one of the most important tourist destinations in the Caribbean. In 2018 there were 6.6 million foreign visitors (including cruise ship passengers), mostly from North America (56%) and Europe (24%). Tourism is therefore the most important source of foreign currency in the country. The main destinations are the developed tourism centers on the north coast (Costa Caribe, Punta Cana, Puerto Macau and Puerto Plata) and on the south coast (La Romana). Check cellphoneexplorer to see North America Travel Guide.

The most important mode of transport is the road (route network: around 19,000 km, half of which is paved), which provides connections to all important centers. At 496 km, railway lines are insignificant and are only used for freight transport (especially the transport of sugar and bananas). Air traffic is handled via the seven international airports as well as numerous regional airports. Coastal and maritime shipping is also well developed. The most important seaports are Santo Domingo, Río Haina and La Romana on the south coast and Puerto Plata on the north coast.