We have found 1 GMAT test centre in Cyprus, located in Nicosia. For specific test dates of 2019, please refer to the end of this page. 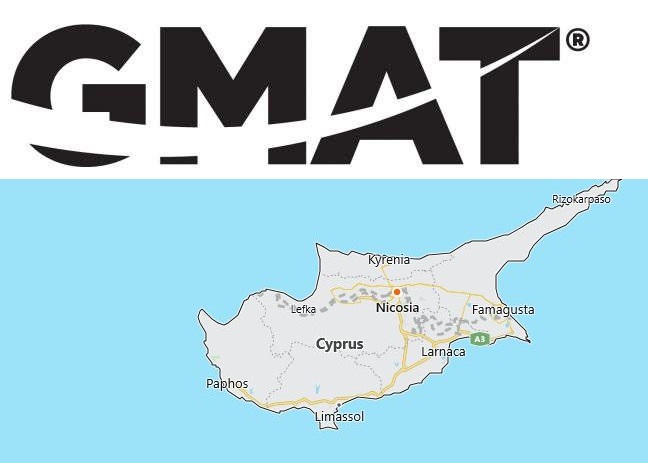 We are situated near the European University, exaclty behind the Kykko secondary schools. For candidates coming from Lefkosia (Nicosia), please follow the location map found at our centre’s website https://aktina.com.cy/contact. You may come via either Griva Digeni Avenue or Byzantium street.

For candidates travelling from outside Lefkosia, please follow the instructions below: As you approach Lefkosia, you follow the highway straight on, past the Bank of Cyprus building (ex Laiki/Popular Bank Head Office), drive for another 2 kms straigh on, past the Cyprus Hilton on Makarios Avenue, and keep driving for another 1 km until you reach the Debenhams crossroad. At the crossroad you turn left onto the Griva Digeni Avenue and keep driving for about 3 kms straight on until you reach the crossroad near the European University and the Kykko monastery. You may then follow the location map found at our centre’s website https://aktina.com.cy/contact.

There is ample free parking space around the testing centre’s location.

Unlike some paper based exams, the GMAT is computer based. Therefore, there are no fixed test dates for GMAT. Wherever you are in Cyprus, all test centers are open from Monday through Saturday throughout the year. Some even offer the exam every day of the year.  However, some test centers are not open on Sundays and national holidays. For example, most college-based test centers might be closed for extended periods around holidays. For precise testing dates in Cyprus, please visit test-maker website – https://www.mba.com/.

The school system in both parts of Cyprus is controlled by the respective Ministry of Education. In the Greek-Cypriot part, there is a nine-year compulsory education (from 5 1 ⁄ 2 years) with free tuition. The education system includes the optional, partly free pre-school, the six-year primary school, which leads to the compulsory three-year lower secondary level. This is followed by the three-year upper secondary level, divided into the general lyceum, the technical secondary school and the vocational school. In the tertiary sector there are the University of Cyprus (opened in 1992) in Nicosia, the Open University of Cyprus (founded in 2001) in Nicosia and the Technical University (founded in 2004) in Limassol.

In the Turkish Cypriot part, after the voluntary pre-school, there is an eight-year compulsory education with free tuition. The three-year secondary level I builds on the five-year primary school, followed by the three-year grammar school, the technical secondary school or the vocational school. In the higher education sector, there is the Eastern Mediterranean University (university since 1986) in Famagusta as well as several private institutions, such as the Lefke European University, the Girne American University and the University of the Middle East. Check cellphoneexplorer to see South Europe Travel Guide.

The political division of Cyprus is also reflected in the media landscape; both parts of the country have their own print media and radio stations. While there is freedom of press and information in the southern part of the island, the north is under the control of the Turkish Cypriot administration; there is no press law, opposition media can be suppressed and journalists imprisoned. – press: In the southern part of the island, six Greek-language daily newspapers (including “Phileleftheros”, “Simerini”, “Politis”) and two English-language newspapers (“Cyprus Mail”, “Cyprus Weekly”) dominate the market. There are also several smaller daily newspapers that appear in Turkish. In the northern part of the country there are nine Turkish-language daily newspapers (including »Kıbrıs«, »Afrika«, »Halkın Sesi«) that are closely associated with political parties. In addition, the large Turkish newspapers “Sabah” and “Hürriyet” are distributed. – News agencies: In the Greek Cypriot partCyprus News Agency (CNA, founded 1976, independent), in the Turkish Cypriot part Türk Ajansı Kıbrıs (TAK, founded 1973). – broadcasting: The public broadcaster Cyprus Broadcasting Corporation (CyBC) in the south of the island broadcasts two television and three radio programs. There are also several private TV channels (including “Mega TV”, “Antenna TV”, “Sigma TV”) and over 30 private (mostly local) radio programs. – The broadcaster Bayrak Radio-TV in Northern Cyprus also broadcasts two television and several radio programs; it is under government control and is largely funded by Turkish state television. There are also several private television and radio stations (including »Kıbrıs TV«, »First FM«). In addition, several TV channels from Turkey and Greece broadcast to Cyprus.