We have found 1 GMAT test centre in Bolivia, located in La Paz. For specific test dates of 2019, please refer to the end of this page. 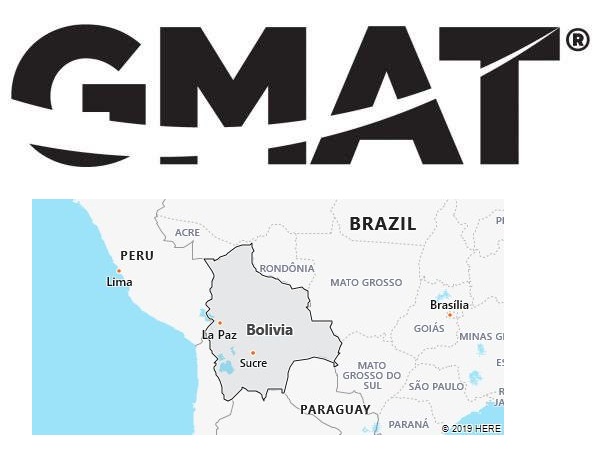 Unlike some paper based exams, the GMAT is computer based. Therefore, there are no fixed test dates for GMAT. Wherever you are in Bolivia, all test centers are open from Monday through Saturday throughout the year. Some even offer the exam every day of the year.  However, some test centers are not open on Sundays and national holidays. For example, most college-based test centers might be closed for extended periods around holidays. For precise testing dates in Bolivia, please visit test-maker website – https://www.mba.com/.

The climate is tropical. The temperature values, which show slight fluctuations over the course of the year, are mainly dependent on the altitude (in the lowlands, the Tierra caliente, annual mean 22-27 ° C, in the summit region of the Andes, the Tierra nevada, 0-3 ° C). Precipitation decreases from east to west and from north to south: in the highlands from over 600 to around 50 mm per year, in the lowlands from over 2,000 to less than 500 mm. The snow line is around 5,300 m above sea level. Check thenailmythology to see Bolivia Travel Package.

The education system was fundamentally reorganized in the mid-1990s. Since then there has been general compulsory schooling between the ages of 6 and 14. The eight-year compulsory primary school consists of three levels. In the last stage, general or vocational training can be chosen. The four-year secondary school is divided into a general education and a vocational / technical branch. In addition to technical colleges and universities of education, there are 10 state and over 40 private universities or colleges, including in Sucre (founded in 1624) and in La Paz (founded in 1930).

In rural areas in particular, however, public schools are poorly equipped, both materially and personally.

Freedom of the press is protected by the constitution. However, strong state and party political influence sets clear limits to independent reporting.

Press: Around 30 newspapers appear in Bolivia. The largest daily newspapers include “El Diario” (founded in 1904), the oldest in the country, “La Razón” (both La Paz) and “El Deber” (Santa Cruz) as well as the tabloids, founded in 1999, “Extra” and “Gente”.

Broadcasting: Radio is the most widely used mass medium. In addition to the state »Radio Illimani« and the Catholic »Radio Fides«, there are more than 600 radio stations. The state “Bolivia TV” (“Canal 7”) has been broadcasting a national television program since 1969. There are also around 160 private channels, most of them with a short range. The largest commercial broadcasters include “Red UNO de Bolivia” and “Unitel Bolivia”. The Catholic Universidad Mayor de San Andrés (La Paz) produces the educational program “Televisión Universitaria – Canal 13”.

The court structure is three-tiered: The Supreme Court (seat: Sucre ) is divided into five chambers, two for civil matters, one for criminal matters and two for administrative and social law matters. There are also higher district courts and the local courts. The constitutional court (seat: Sucre) monitors compliance with the constitution. The judges of the Supreme Court and the Constitutional Court are elected by the population. While the first two civil codes of 1830 and 1845 were still heavily influenced by the French Civil Code, the third civil code of 1975 is modeled on the Italian Codice civile (1942). Family law is regulated in a separate law. The 1973 Penal Code was fundamentally reformed in 1997. The 2009 Constitution recognizes traditional tribal jurisdiction as legitimate.

Given its scenic and cultural attractiveness, tourism is capable of development. In 2014, Bolivia recorded 1.2 million foreign guests. The destinations, which are mainly visited by individual tourists, concentrate mainly on the Altiplano with Lake Titicaca, La Paz and the Salar de Uyuni, but also on the Cordillera (hiking) and parts of the Bolivian mountainous region (e.g. Sucre ).

Large parts of the country, especially in the east, are not accessible to traffic. This includes almost the entire lowlands, which, with the exception of the Santa Cruz department, can only be reached by air. The road network, which is around 90,000 kilometers long, is only ten percent paved and is mainly concentrated in the Altiplano region. The railway network of around 4,000 km in length consists of two separate parts. The western section connects the cities of the highlands and the ore deposits with the Pacific ports in Chile and Argentina. The railways in the southeast of the country connect Santa Cruz de la Sierra with Yacuiba on the Argentine and Corumbá on the Brazilian border. Due to agreements with Paraguay and Argentina, Bolivia can use the waterways of the Paraguay River and the Río Paraná. A free port at Rosario granted by Argentina gave Bolivia access to the Atlantic Ocean. An agreement with Peru that has existed since 1992 on the use of the port of Ilo enables free access to the Pacific. International airports are El Alto (La Paz), Viru-Viru (Santa Cruz de la Sierra) and Juana Azurduy de Padilla (Sucre).