We have found 1 GMAT test centre in Bangladesh, located in Dhaka. For specific test dates of 2019, please refer to the end of this page. 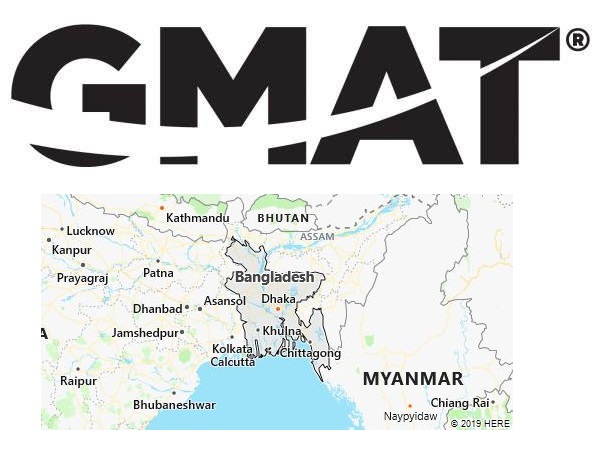 Unlike some paper based exams, the GMAT is computer based. Therefore, there are no fixed test dates for GMAT. Wherever you are in Bangladesh, all test centers are open from Monday through Saturday throughout the year. Some even offer the exam every day of the year.  However, some test centers are not open on Sundays and national holidays. For example, most college-based test centers might be closed for extended periods around holidays. For precise testing dates in Bangladesh, please visit test-maker website – https://www.mba.com/.

Over 95% of the population speak Bengali , the refugees from India (Biharis) Urdu and the tribal population of the Chittagong Hill Tracts speak Tibetan Burmese languages. With 1,240 residents / km² (2018), Bangladesh is one of the most densely populated territorial states in the world. 63% of the population live scattered across the country in small villages, where the most serious development problems (underemployment, malnutrition, poverty) can be found. Because of the frequent flooding, many settlements were built as stake villages.

Increasingly, people hope to improve their living conditions by moving to the few cities, especially the capital Dhaka. But for the majority of the newcomers there are neither enough jobs nor enough living space there.

According to the UNHCR, 906 600 refugees were living in Bangladesh at the end of 2018. Most of them are the Rohingya , expelled from Myanmar, who have settled in the region around Cox’s Bazar.

Social: In 2000 about half of the population lived below the national poverty line. However, through targeted political measures, it was possible to reduce the poverty line to around 25% in 2016. The fight against poverty has continued to be successful since 2016, with the result that the number of people in extreme poverty (less than 1.90 US dollars per day) has fallen from 15% to below 5% in 2020. This positive trend was stopped by the COVID-19 pandemic in 2020.

Since there is no general social security system, social security is usually provided by the family. Public health care is inadequate and has come under enormous pressure as a result of the Corona crisis. In 2018 the number of doctors per 10,000 residents was 5.8%, the number of intensive care beds in the whole of Bangladesh was just under 1,000 in 2020.

Women are still severely disadvantaged in society and Bangladesh is one of the countries with the highest number of child marriages in the world. Around 60% of girls are under 18 when they get married. Due to their usually poorer education, women make up the majority of employees in the textile industry, in which extremely low wages are paid. Child labor is also still widespread in agriculture and the textile industry.

The biggest cities in Bangladesh

The constitution defines Islam as the state religion and protects, also with regard to non-Islamic religions, the right to exercise religion freely if this occurs in “peace and harmony” with the Islamic state and social order. Almost 90% of the population are Muslims, predominantly Sunnis from the Hanefi school of law ; there is also a Shiite minority (imamites). Popular Islam, which is strongly influenced by Sufism , plays a major role. The largest religious minority are the Hindus(around 10%); small religious minorities are Buddhists, Christians and followers of traditional religions. Check health-beauty-guides to see Asia Overview.

Despite some successes, the education system is still very sketchy due to decades of neglect and given the enormous population growth. Although there is general, free 5-year compulsory schooling from the age of 6, the schools are extremely poorly equipped, both materially and personally. Many children leave elementary school without a qualification and reading skills in particular are often only rudimentary among pupils in the lower grades. Through targeted support for girls in recent years, equal opportunities for girls and young people with regard to schooling have been achieved.

Primary school is followed by a three-year middle school and a two-year high school, which entitles you to attend college or university after passing the final exam. In addition to the state schools, there are paid, materially well-equipped private schools and Islamic religious schools (madrasas).