Europe’s departure to the Gold Coast and the Ashanti Empire 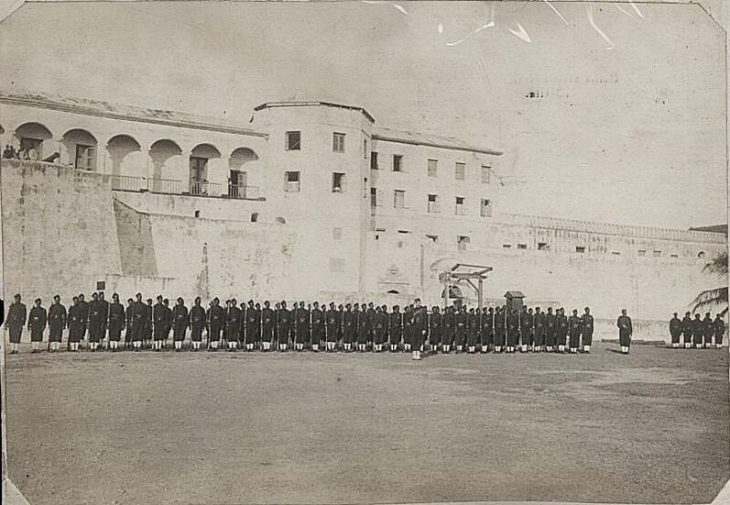 Christiansborg Castle in Accra in the 1870s

The peoples of what was then the Gold Coast came into contact with Europeans for the first time in 1471, when Portuguese seafarers developed trading activities on the Prah River. Shortly afterwards, the Portuguese built the fortresses of Elmina (1482) and Axim (1515), and the Swedes built a fort in Cape Coast in 1653. But British traders, first mentioned in 1553, and merchants and traders from the Netherlands, Denmark and Prussia (Electoral African-Brandenburgische Compagnie, 1683) set up trading bases on the coast. Over the next three centuries, more than 60 fortifications and trading establishments were built, transforming this 500 km stretch of coast into a historic shopping mile.

The competition between Europeans increased steadily in the 17th century. The Portuguese left the Gold Coast in the second half of the century, and by the beginning of the 18th century France tried unsuccessfully to expand its sphere of influence to the Gold Coast. The slave trade flourished, and by 1800 British interests had finally prevailed. This inhuman business also ended at this time. The Enlightenment had begun to develop its intellectual and political power and eventually led to the abolition of the slave trade within the British Empire (1807). The loss of the North American colonies had contributed to this, and France followed Britain’s example after the end of the Napoleonic Wars. In 1844, the British signed the Bond Treaty with Fante Chiefs and thus secured the administrative and legal system that was already in place on the coast. Only a few years later, in 1850, the Empire established its protectorate over British military bases and branches and finally in 1874 declared the south, including the Fante Federation and Lagos, a crown colony ‘Gold Coast Colony’. 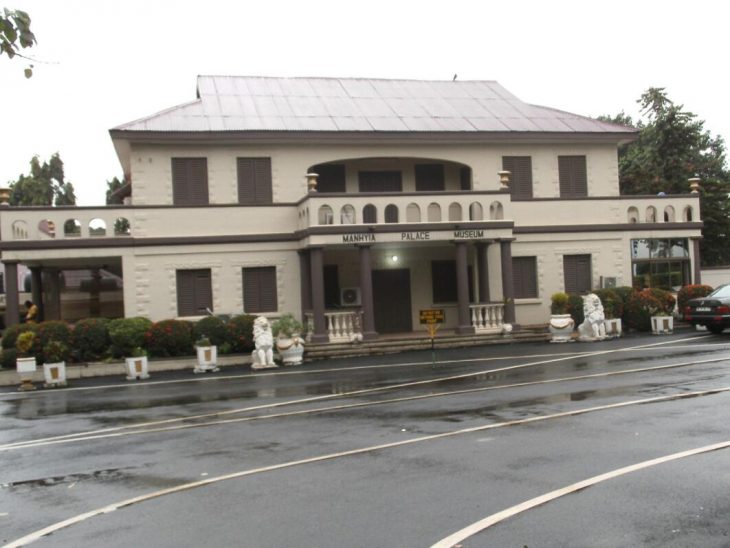 The former palace of Ashantehene

This date also marks the end of the 200-year expansion and heyday of the Ashanti Empire. Its rise in the hinterland began in 1701 under Osei Tutu, and Kumasi became the center of the empire and the seat of the king (Asantehene). The empire experienced its greatest territorial expansion under Osei Bonsu (1800-23), who was able to extend his dominion to the coast. This event coincided with the abolition of the slave trade and deprived the empire of a lucrative source of income. The conflict with the Fante Confederation, which put up considerable resistance, and the British Empire and its imperialist interests was ultimately inevitable. Four wars (1824, 1826, 1836, 1874) led to the decline of the empire and the destruction of Kumasi (1874). British troops invaded the Ashanti Empire again (1896) after King Prempeh I refused to submit to the British. They captured him put him under house arrest at Elmina Fortress for four years and then deported him to the Seychelles. He only returned to Ashanti a few years before his death in 1931. The British demand to surrender the ‘Golden Stool’, the divine symbol of royal power, resulted in an uprising in 1900, which was quickly put down. Shortly afterwards, the new rulers from Europe incorporated Ashanti and the northern areas as protectorates into their Gold Coast colony (1902). The memory of the empire, the long struggle and the bitter resistance of the Ashanti against the European invaders shape the subliminal claim of the Ashanti people to this day, to deservedly ‘have to be state people’. After the First World War, the British also received the League of Nations mandate over West Togo (1922).

History is mostly closely linked to the “Long Duration”, the “Longue Durée”. For Africa and the American continent, this particularly includes the slave trade, which was to change Africa and the so-called “New World” forever. A sad interim result of the “Longue Durée” is the fact that many descendants of the slaves in the USA and Latin America are still disadvantaged, stigmatized and discriminated against. The number of those who want to escape these structures completely is small but remarkable. Because they decide to return to the roots of their ancestors and start a new, self-determined life. Ghana’s good image and the role of the former Gold Coast in the slave trade serve as a metaphor for being able to take this step. A Ghanaian couple from Detroit took this step and began to build a new life in Ghana, one of 16 countries located in Western Africa according to ehealthfacts. The combination of spirituality, physiotherapy and Ghanaian history serve as the basis for business to want to lead a dignified life in the land of the ancestors.