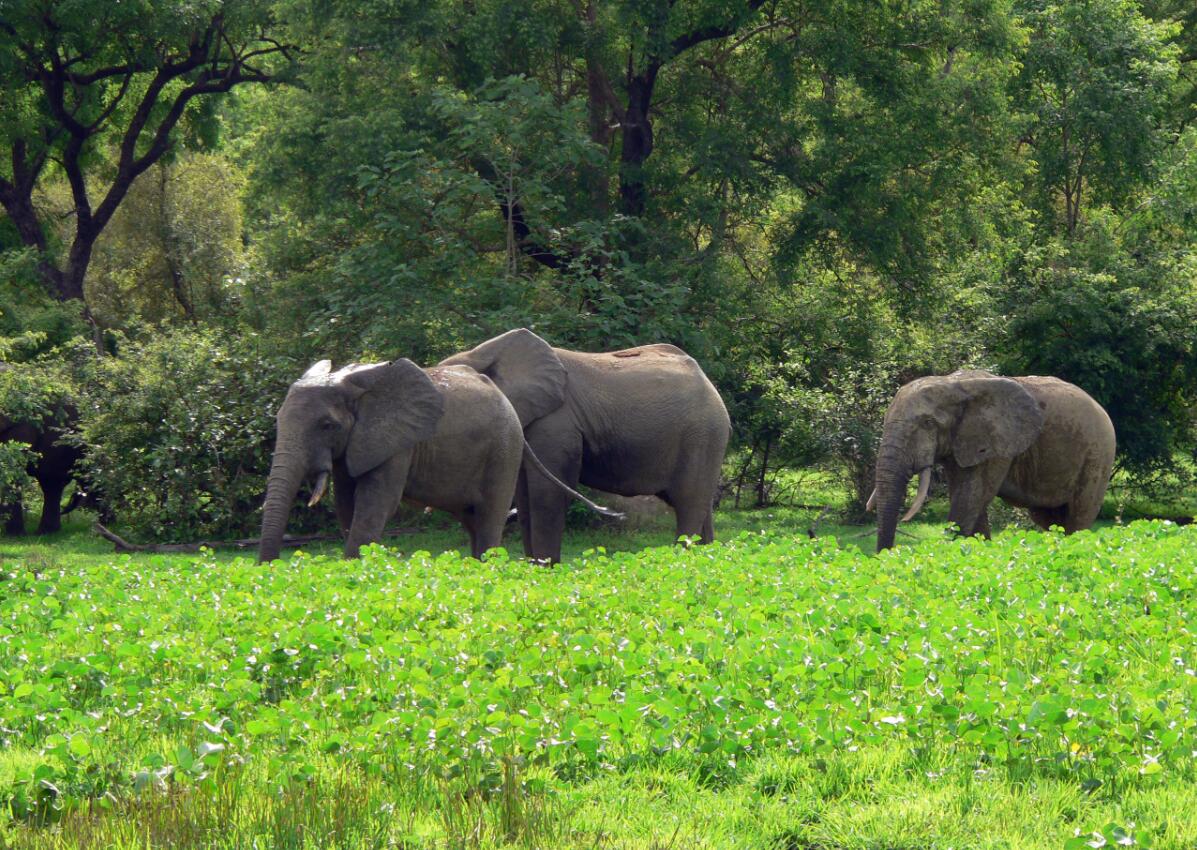 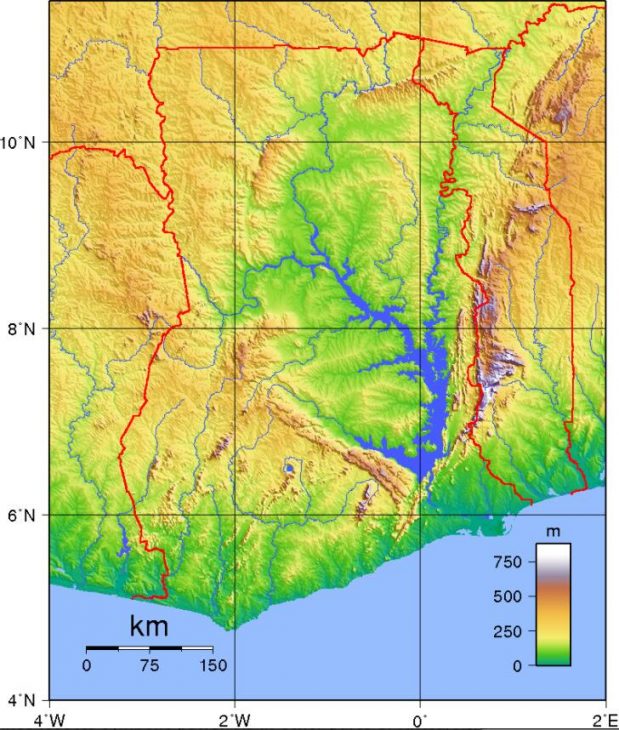 Five natural geographical zones structure the diverse landscape: The Volta Delta and the huge Volta Reservoir in the east and the rainy Akan Plain in the west shape the coastal region, the Ashanti highlands and the water and weather divide of the Kwahu Plateau in the northwest. In the northeast, on the other hand, dominates the mountain and hill chain of the Akwapim-Togo threshold with the 880 m high Afadjato, further north the Volta basin. This is followed by the high plains of the northern regions. The annual rainfall is around 1,000 mm in the north and up to 2,200 mm in the western coastline. In Accra, rainfall barely reaches 800mm a year, and climate change is meanwhile too felt in Ghana. Particular attention are agriculture and farmers particularly affected. Nevertheless, the realization is only slowly gaining ground that climate protection policy is more important than in the recent past and that urgently needed adaptation strategies are being implemented at the same time. 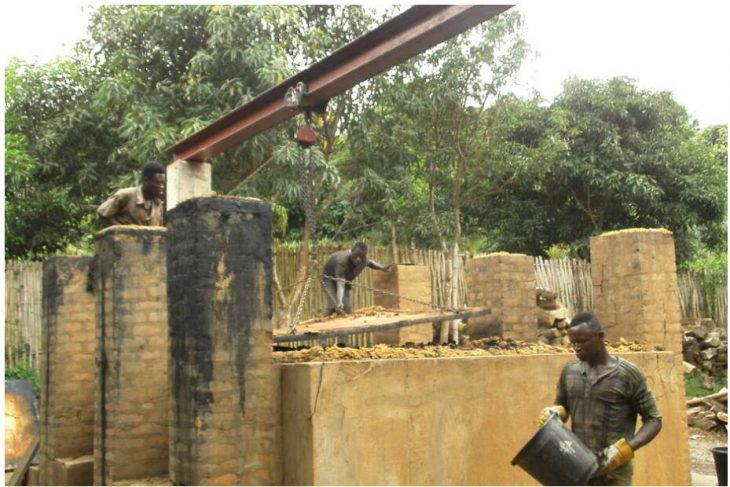 Furnace for the extraction of charcoal and vinegar from bamboo

The cocoa tree engraved on the national coat of arms as a symbol of the wealth of forests and agricultural products has long since lost its symbolic power. As in other parts of Africa, Asia and South America, huge areas in Ghana have fallen victim to greed and the consumption of precious woods over the past six decades. During this period, the rainforest shrank by around half to only around 40,000 km². And the overexploitation continues, albeit at a slower pace. However, the constant global demand for cocoa and palm oil continues to drive the plantation economy business model, so that child labor is by no means rare on these plantations, even if not as pronounced as in the neighboring Côte d’Ivoire.

But illegal charcoal burners also affect the rainforest. Because the demand for charcoal is still unbroken in view of the high electricity prices, and the government has so far shown no serious willingness to stop this permanently destructive process. There are alternatives that combine environmental protection and the creation of a basic income for the local population. The basis is the abundant bamboo, from which charcoal, vinegar and, in a further step, high-quality natural fertilizer can be produced. This requires a special oven that can produce several tons of bamboo charcoal from bamboo within a short time in an environmentally friendly manner. Bamboo vinegar is an important by-product of this process. 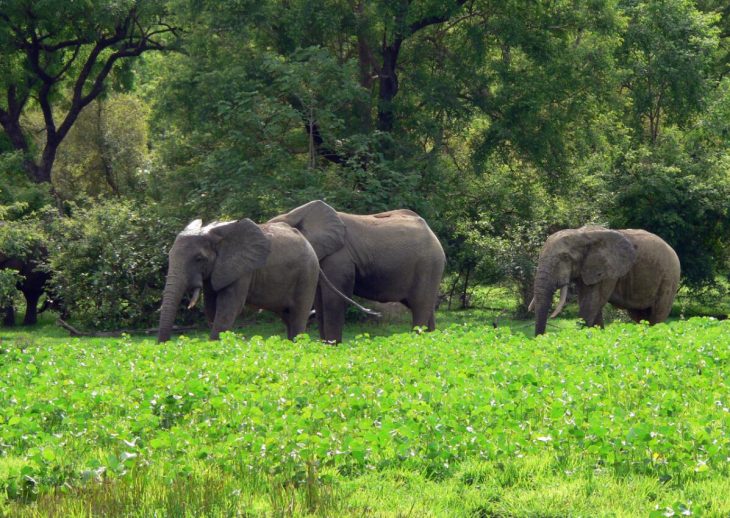 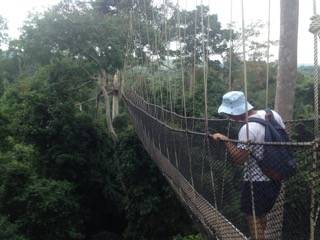 The spectacular suspension bridge in the Kakum National Park

According to ezinereligion, West Africa’s wildlife cannot compete with the still impressive diversity of eastern and southern Africa. Nevertheless, the hunt for game continues unabated, so that the situation of the decimated wild animals is more than worrying. Deforestation, expansion of the agricultural area and consumption of the beloved ‘Bush Meat’ created a precarious situation for wild animals such as lions, antelope species, porcupines, primates, elephants, aardvarks, hyenas, civets and gorse cats, which were almost everywhere just a few decades ago lived in the wild. A concerted international action is now attempting to save at least some of the threatened species from extinction. This includes the West African Primate Conservation Action(WAPCA), which was founded as an international association of a total of eleven European zoological gardens in order to prevent further species from becoming extinct. The WAPCA also has an office in Accra. In view of the threatening situation, efforts are increasing to expand the few shelters. In this context, the national parks Mole, west of Tamale, and Kakum, north of Cape Coast, were put on the list of UNESCO World Heritage Sites. 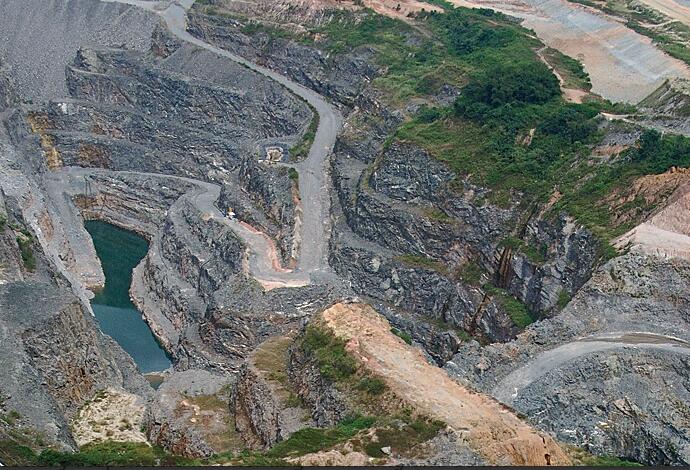 The history of Ghana is inseparably linked to gold and gold mining up to the present day. Environmental protection was unknown and is still mostly a foreign word today. Mine operators use mercury and cyanide for low-cost industrial extraction, which contaminate the groundwater and threaten the health and life of people and animals. The state is now even issuing licenses for gold mining in forest reserves, as most recently in the controversial case in Ajenua Bepo in the Eastern Region, as the US company Newmont Mining Corporation, against fierce opposition from civil society groups, which received the license to support However, the company pretends to proceed in an environmentally and socially responsible manner in gold mining and at the same time to provide development policy impulses at the local level.

Not only the big mining companies spoil the environment. Private gold miners, popularly known as Galamsey, also poison property and transform the properties assigned to them into unreal “lunar landscapes” for a long time. But rivers are also victims of these gold miners, because excavations on nearby banks penetrate the rivers with overburden and destroy the ecosystem. In the case of the large Ankobra River in the west of the country – and this is not an isolated case – this led to the extensive destruction of fish hatcheries in the estuary on the Gulf of Guinea, where many fishermen lost their livelihoods. For the first time, a government is taking action against the many illegal gold miners, the number of which has increased enormously in recent years, and tribunals were established in April 2017 established that can take legal action against the illegals. In the meantime the government is taking massive action against the Galamsey on the rivers in the western parts of the country with water police and marines. In August 2019, President Akufo-Addo put the “Vigilantism and Related Offences Act 2019” into force, which provides for draconian sentences of up to 25 years in prison for illegal gold mining. 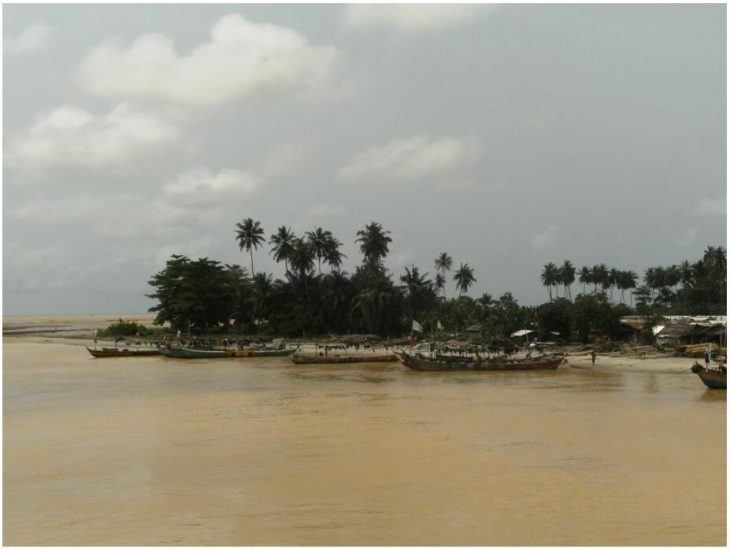 The mouth of the mud-contaminated river Ankobra