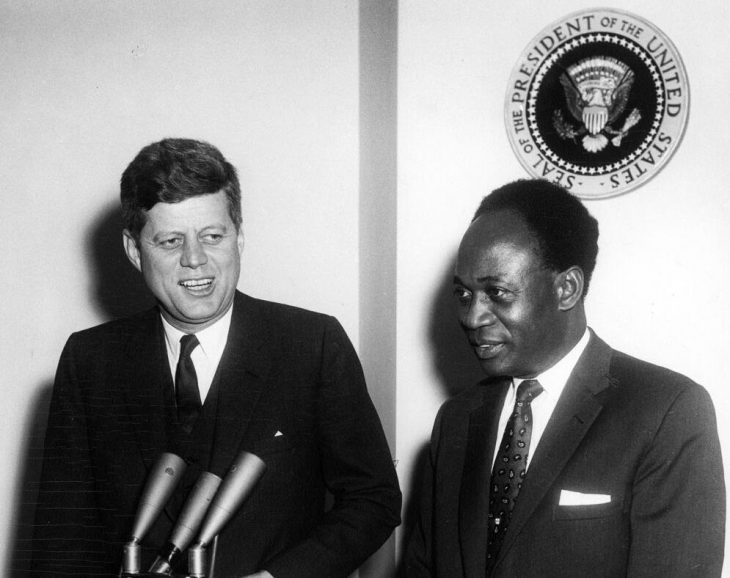 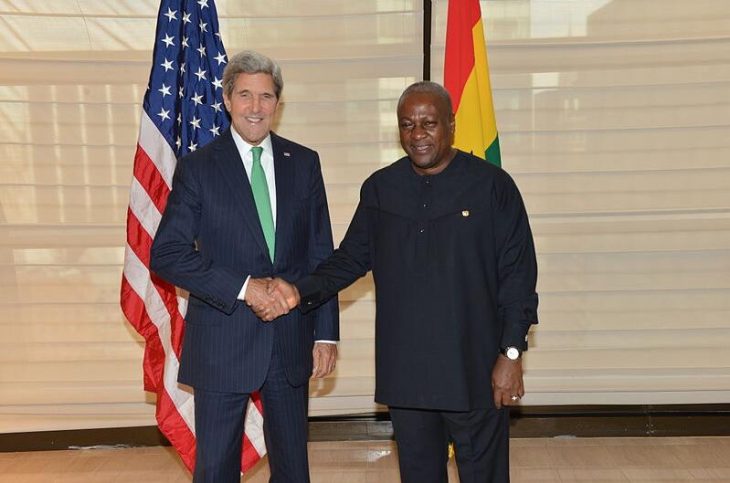 John Dramani Mahama and then US Secretary of State John Kerry 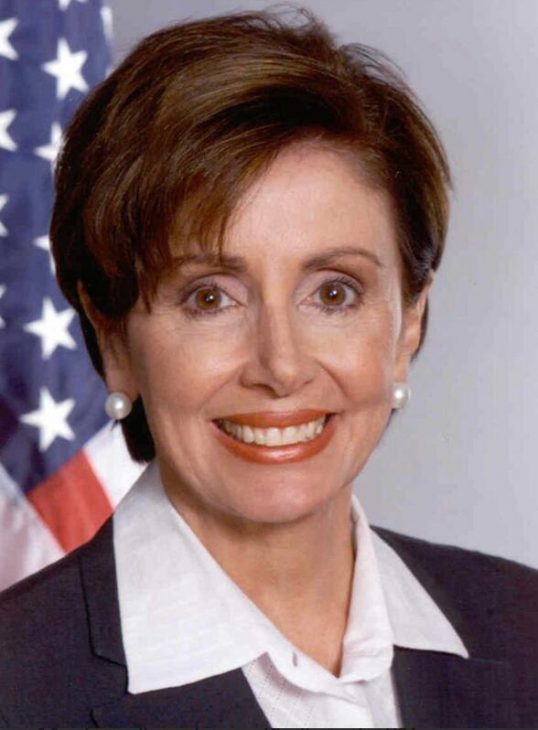 Four phases essentially constitute Ghanaian foreign policy. Phase one includes the emancipation movement of the Nkrumah era, phase two the erratic tension between the various military regimes and the short-lived civil governments of Busia and Liman. Phase three under Rawlings institutionalizes, stabilizes and modifies Ghana’s dialectical relationship to the two Bretton Woods institutions, the IMF and the World Bankand the rest of the western donor community, while Kufuor initiated phase four. Mills, Mahama and Akufo-Addo continued this phase, which stands for continuity and consolidation of the Ghanaian development and democratization project. In doing so, President Akufo-Addo modified the foreign policy a little in favor of a slight focus on the West African region. Nevertheless, the decisive coordinates of foreign policy point specifically to the USA and the EU.

In this context, the Ghanaian government decided at the beginning of 2016 to accept two Yemenis who are incarcerated in “Camp 5” in Guantánamo without charge as a result of the historically significant date of September 11, 2001. Despite several attempts, the Obama administration was unable to close the legally controversial US prison camp in Cuba within its term of office, which ended in January 2017. However, Ghana’s highest court – the Supreme Court – ruled on June 22, 2017 that the decision of the Ghanaian government under President Mahama was unconstitutional because it was taken without the consent of parliament. On 01 August 2017 ratifiedthe new parliament signed the agreement and gave the two Yemenis the opportunity to stay in Ghana beyond the two-year guarantee.

Despite this decidedly western orientation, the new President Akufo-Addo underlined the genuine Ghanaian interest in stable political conditions in ECOWAS. In May 2017, for example, the President toured all member states within a few weeks and began his West Africa tour in neighboring Togo. In doing so, he underlined once again that under the new government, Ghana is committed to maintaining the good relations with its once difficult eastern neighbor in the future. Akufo-Addo acted similarly with his western neighbor Côte d’Ivoire, who suffered a severe defeat before the International Maritime Court when the court ruled in Ghana’s favor. However, Ghana’s president shook hands with his counterpart, opening a new chapter in cooperation.

Earlier than expected, the International Tribunal for the Law of the Sea reached its verdict on September 23, 2017 in the Elbe metropolis of Hamburg in the court proceedings regarding the maritime border between Ghana and Côte d’Ivoire and the legality of Ghana’s offshore promotion in this area. The vote was clearly in favor of Ghana, with both sides asserting in advance that they would recognize the judgment. Both sides had already signaled at the time that they would enter into a strategic partnership despite the legal proceedings before the International Tribunal for the Sea.

The foreign policy thinking of the state’s founder Kwame Nkrumah had strong eclectic features. This reflected in particular his experience in the USA and the idea of pan-Africanism developed by Afro-Americans in the USA and the Caribbean. But the principles of Mahatma Gandhi’s non-violent resistance, the emancipatory radical content of the non-aligned movement and the idea of being able to act as a sovereign and equal subject of international law within the new world order after World War II also played a central role. But precisely this last aspect turned out to be a fatal political miscalculation and overwhelmed the economic and financial resources of the small country.

The putschists under General Joseph Ankrah, who headed the state in 1966, assumed all the obligations of the overthrown government due to a lack of political and economic competence. The regime quickly came under the auspices of the international financial world, had to surrender a central area of its sovereignty to the IMF, thus depriving itself of any room for maneuver in foreign policy and finally exacerbated the development crisis. In the field of subregional crisis management and diplomacy, too, the junta lacked both authority and the necessary tact. Consequently, the attempt to mediate on Ghanaian territory in the impending Nigerian civil war failed miserably. The Ghanaian leadership gave the impression that they were negotiating in favor of biafras, which for years put a considerable strain on the Ghanaian-Nigerian relationship, which had been problematic since the late colonial phase. Two other events also made for extremely frosty relationships: the execution of three former junta chiefs by Jerry Rawlings in 1979 and the expulsion of more than a million Ghanaian citizens by the elected Nigerian government under Shehu Shagari in 1983.

The civil government of Kofi Busia, which has shaped the short-lived Second Republic since 1969, pursued a policy of discrimination against foreigners, particularly Nigerians, which secured some jobs for Ghanaians, but isolated Ghana throughout the sub-region. The hope of continuing the decidedly pro-Western course and development path taken in the interests of the IMF and the World Bank and receiving the necessary support for this was not fulfilled. It was not possible to master the economic and debt crisis through growth at any price, nor were the Western creditors willing in any way to accommodate the government in view of Ghana’s geo-strategic insignificance.

The military regime under Ignatius Acheampong, which came to power in 1972, did not recognize the debt rescheduling agreements of the previous governments and reversed the principle of proof regarding the Nkrumah debt. In addition, it put the idea of pan-Africanism back at the center of foreign policy, set up an information center on the liberation of the continent with a view to South Africa, transferred the remains of the state founder from exile in Guinea, re-intensified relations with the socialist countries and broke the diplomatic relations with Israel. Many African states followed the campaign with great interest, even without an IMF agreement to stabilize foreign trade relations. This campaign, along with Ghana’s constructive role in establishing the ECOWAS, the country out of self-inflicted isolation.

The 1973 oil price crisis ended the recovery and emancipation phase. Corruption and smuggling increased and stifled all progress. The palace revolt under General Frederick Akuffo in 1978 was followed by a radical foreign policy turnaround towards the IMF and its programs and an attempt to stabilize the country under kleptocratic conditions and to thwart a potential lower-ranking coup in advance. Instead of stability, the regime provoked massive protests from the population and finally imposed a state of emergency, which heralded the imminent end of the regime.

From the beginning, the Rawlings era was characterized by two apparently contradicting strands of foreign policy. On the one hand, the Bretton Woods twins recognized that the Ghanaian crisis was based on a development crisis that could only be overcome in the long term and with massive efforts by the World Bank. This required the renewed submission of Ghana’s economic and financial policy to the dictates of Western donors. On the other hand, Ghana stuck to its close ties to socialist, populist and revolutionary regimes such as Cuba, Libya, Iran and North Korea and to an initially militant and later moderate anti-imperialist rhetoric. This dichotomy formed the political platform on which the international financial cops, as well as the Rawlings regime, could act to the mutual benefit.

The failure of the socialist model in the early 1990’s also modified foreign policy parameters. Pan-African content took a back seat in favor of a decidedly sub-regional focus and an open orientation towards the USA and the EU. The extremely tense relationship with neighboring Togo also began to relax after the Rawlings government had to recognize that the support of Togolese opposition members and opponents of the regime was in no reasonable relation to the political gain. In addition, both sides have since expressed their increased interest not to endanger the ambitious and long-term West African gas project.

However, the newly elected President John Kufuor reaped the political fruits of the improved relations with neighboring Togo. His Togolese counterpart Eyadéma attended the inauguration in 2001. And the Ghanaian President’s first trip abroad took him to Togo, where he took part in the celebrations for the 34th year of Eyadéma’s seizure of power, which hardly aroused criticism. Rather, the experienced foreign politician Ibn Chambas was elected General Secretary by the ECOWAS states, and the Western donors, above all Germany, financed the Kofi Annan Peace Keeping Training Center, a homage to the former UN Secretary General and the positive image of Ghanaian blue helmet soldiers.

As one of 16 countries located in Western Africa according to ehistorylib, Ghana’s foreign policy options increased slightly again after Mahama was elected ECOWAS chairman at the end of March 2014 and Nigeria continued to be challenged by violent Islamists in their own country. This means that the relationship with its large neighbor Nigeria, which has been difficult for decades, plays a constitutive role. In the African context, Ghana’s foreign policy relevance and assertiveness resembles a zero-sum game in which Nigeria defines the scope for action. A stable Nigeria assigns Ghana the role of junior partner, while an unstable one assigns a leadership role.