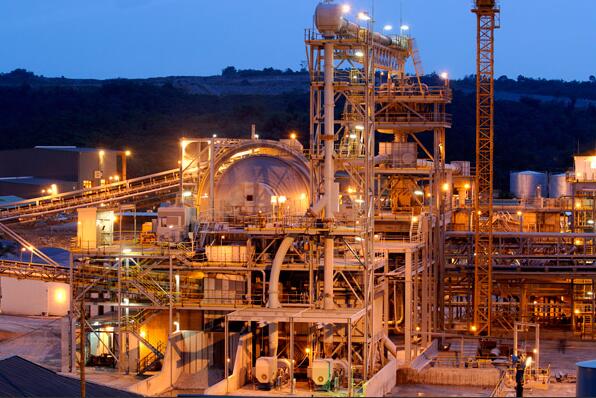 In addition to the considerable oil reserves, there are also considerable reserves of natural gas under the ocean floor, which, based on current knowledge, should amount to more than 20 billion cubic meters of natural gas, but which are not yet being extracted. Rather, the ‘Associated Gas’ released during oil production is flared and partly injected again, but there are concrete plans to feed the natural gas to the Aboadze thermal power station near Sekondi-Takoradi, the new ‘El Dorado’, for the purpose of generating electricity. As one of 16 countries located in Western Africa according to cellphoneexplorer, Ghana is heavily dependent on gas supplies from Nigeria, which according to the contract amount to 120 million ‘standard cubic feet’ and reach Ghana via the ‘West African Gas Pipeline’ (WAGP). So far, problems have repeatedly arisen on both sides. While Nigeria often failed to keep its promises, Ghana repeatedly got into financial difficulties. At the end of June 2016, WAPG temporarily stopped delivering gas as the Ghanaian side once again failed to meet its payment obligations. The precarious power supply that had existed for years deteriorated again. In the meantime, the situation has eased somewhat and Ghana is now even exporting electricity to neighboring countries Cote d’Ivoire. Hydropower to generate electricity for industry at the giant Akosombo Dam, and traditional uses of kerosene and charcoal are still prevalent for households.

Electricity generation and with it the inadequate energy supply in the past have improved – at the end of 2018, an installed capacity of 4,400 MW was available nationwide, although 3,800 MW can be regarded as reliable. The government is committed to promoting renewable energies, although their share is only around one percent. In a first step, a Greenhouse Estate project is being developed in the Greater Accra area as part of the NEIP program, which is to be expanded into the largest of its kind in Africa in the medium term. Towards the end of the severe energy crisis under the previous government of President Mahama, new electricity capacities were created with the help of external energy companies such as Karpowership established and long-term supply contracts for liquefied gas concluded on the basis of take-or-pay. Ghana now has considerable overcapacities and purchase commitments, which have entailed considerable financial risks and could cost more than USD 10 billion in the national budget in the election year and in the next legislative period.

The current annual cost of unused energy is approximately $ 500 million. In addition, nearly $ 3 billion in debt weighs on the electricity sector, in which the Electricity Company of Ghana (ECG), the Ghana Grid Company (GRIDCO) and the Northern Electricity Distribution Company (NEDCO) are responsible for transmission and allocation. Almost half of the unpaid bills are due to government institutions and companies, as well as technically caused energy losses and reduced electricity prices. The multi-year Energy Sector Recovery Program (ESRP) adopted in May 2019 aims to find a medium-term solution to the crisis with the help of the World Bank. The cancellation of the concession for the privately organized Ghanaian-international consortium Power Distribution Services (PDS), announced by the government and the ECG in October 2019, may represent a major setback for the reform efforts, as there are considerable legal and financial risks. In addition, the government did not paint a good picture on this complex matter.

It remains to be seen whether the energy resource oil / gas will prove to be a curse or a blessing for Ghana. What is certain is that it accelerates economic and social transformation processes in what is still an agrarian economy. The ongoing rural-urban migration into the two huge metropolitan areas of Accra and Kumasi is evidence of these processes of change to which agriculture is also subject. On the one hand they fuel the service sector and on the other hand they expand the informal sector. In Ghana, too, smallholders have become an interesting target group for digitally savvy investors and donor organizations who are convinced that with the help of digitization integrating smallholders into the formal economic sector and at the same time being able to increase yields significantly and sustainably. Despite numerous positive trends, self-sustaining growth is still a long way off, so that Ghana will also need massive international support for the foreseeable future. Increasing direct investments from abroad, especially from China, ample transfer payments from Ghanaian citizens and people of Ghanaian origin in the overseas diaspora, growing tourism and loans from the relevant international development institutions such as the World Bank, IMF and African Development Bank contribute significantly to growth and modernization. In February 2015, the time had come again: Ghana received an urgently needed structural and aid program worth US $ 940 million from the IMF, spread over three years, so that the ailing economy could regain its footing and implement long overdue reforms such as reducing subsidies for gasoline and electricity. At the end of August 2017, another IMF delegation was in Ghana to discuss a new loan. The result was positive and Ghana received $ 94.2 million from the extended credit facility program. Nevertheless, despite the noticeable will to reform, there are significant deficits such as the Doing Business 2020 index the World Bank from 2019 shows that Ghana ranks 118th out of 190 countries only in the lower midfield. On April 2, 2019, the Finance Minister announced the end of the extended IMF credit facility.

Gold processing in the mine in Tarkwa