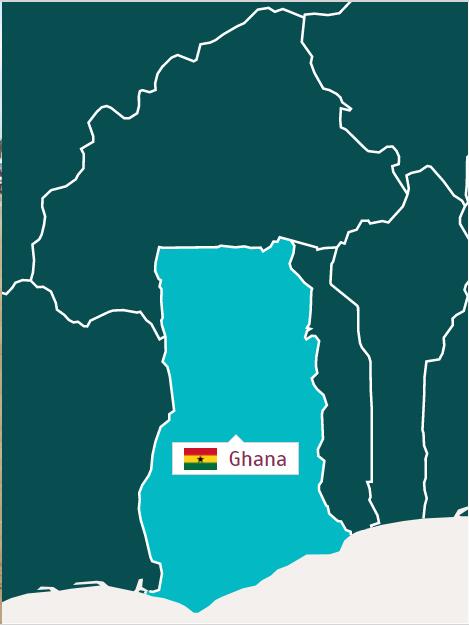 In the past two decades, the northern regions have remained the political and socio-economic problem childof every government. Poverty, emigration to the south, the growing disinterest of the political leadership in Accra in developments in the north and crises in neighboring countries intensified local tensions, which have erupted several times since 1994 and caused considerable, sometimes even severe damage. As early as the 1980’s, there had repeatedly been spatially and temporally limited conflicts over property relations and rights of use in this region. But the year 1994 severely shook the self-confidence of the Ghanaians and almost robbed them of their belief that they were a peace-loving, tolerant country. Because the extent of violence and destruction had reached a level that shocked, but was hardly noticed by the world public in view of the events in Somalia, Rwanda and South Africa. Several thousand victims Hundreds of razed villages and tens of thousands of refugees in their own country were the bitter result of a dispute over land use rights and the claim to a Paramount Chief for the Konkomba. This ethnic group was the only one of the larger local ethnic groups that did not have its own Paramount Chief and at the same time was dependent on leases. In the run-up to the first presidential and parliamentary elections of the Fourth Republic in 1992, Rawlings and his party NDC had promised to deal with this topic in the spirit of the Konkomba after the election. The numerous votes were secured and the commitments forgotten. For example, a normally vain event such as a dispute on a market square in Nanumba District in January 1994 was enough to discharge pent-up hatred and cause a wildfire,

Ghana is one of 16 countries located in Western Africa according to cheeroutdoor. The late 2000 election, which marked the end of the Rawlings era, saw serious rioting with ethnic overtones in the city of Bawku in the Upper East Region after the NPP, the party of eventual presidential election winner Kufuor, the NDC the constituency had decreased. Around 30 people were killed, several houses were burned down, and Bawku was finally subject to a night curfew for several days.

The new government under John Kufuor and his NPP faced a smoldering and sometimes bloody ethnic conflict within the Dagomba in 2002. Memories of 1994 came back. The cause of the wave of violence was the dispute within the two most important Dagomba clans Andani and Abudu over the implementation of the annual Bugum Festival in Dagbon, near the city of Yendi, the royal seat. Behind this hid internal power struggles over the influence of the two clans, which alternately placed the king in Dagbon. When the conflict openly broke out in March, an Andani sat on the throne of the Dagomba. King Ya Naa Andani II and several dozen of his followers were murdered, his palace burned to the ground, and the wave of violence continued. President Kufuor declared a state of emergency in Dagbon, which was confirmed by parliament and subsequently repeatedly extended. This was accompanied by a night curfew and the festival was canceled. The conflict continued to smolder as the two clans could not agree on the funeral or the successor. Even the attempt of the then UN Secretary General Kofi Annan to mediate failed. It was not until a year later that the Asantehene succeeded in burying the murdered king in a temporary resting place. But it was not until 2006 that he received a state funeral in Yendi. The rotation was suspended because the king did not die of natural causes. All legal attempts in the following years to hold the masterminds accountable ultimately failed because of incompetent security authorities, politics and reliable evidence.

In November 2018, a solution to the decades-long conflict became apparent. Accordingly, the body of the former king Na-Mahamadu Abdullai, who belonged to the Abudu clan and died in the late 1980’s, could finally be buried in December 2018 according to the traditional rite. He was removed from office in 1974 by the military government under General Acheampong. The Andani clan had so far refused the traditional burial, which the Abudu clan believed had to take place in the royal palace in Yendi. The Andani clan, for their part, set a time window in January 2019 in which the murdered King Ya Naa Andani II receives the still overdue traditional blessings to finally find his peace of mind. Several skirmishes leading up to the event delayed the performance of the ordinances. But they were finally brought to a conclusion with the help of the security forces and level-headed actors from both clans. Subsequently, the new king of the Dagbon was introduced to his office as Yaa Naa Abukari Mahama II with full regalia and honors.

In mid-March 2016, violent clashes broke out again in several northern parts of the country, this time in the greater Kumasi area and in the Volta and Northern Region. The government was even forced to impose a night curfew in several localities, such as Old Tofa, Bimbilla, Bunkpurugu, Alavanyo and Nkonya. In the following months, the interior minister renewed the curfews in order to keep the still unstable situation in these towns in the Northern and Volta region under control as far as possible. In mid-April 2017, violent riots broke out again in Alavanyo and Nkonya, with several people shot dead and some injured. A few days before Christmas 2019, the government extended in Alavanyo and Nkonya once again the night curfew. In July 2019, after years of internal disputes, the warring royal clans concluded peace in Bunkpurugu by means of a traditional rite, the “Blood Burial”.

In February 2017, serious riots broke out again in Bimbilla, in the Nanumba district in the Northern Region, killing at least ten people. Dozens were injured and the minister responsible for the region announced a night curfew. The background to the unrest was a dispute between two royal clans, which had been smoldering for years, over the interpretative sovereignty and supremacy of questions about traditional rule within the Nanumba. Finally, the conflict was largely resolved in 2018.

In the meantime, the long-running conflict over the successor to the chiefs of the Ga, the Ga Mantse, has largely been resolved in the greater Accra area. The National House of Chiefs upheld Boni Nii Tackie Adama Latse II as legitimate Ga Mantse in April 2018, a decision the chief priest challenged. In his opinion, the throne in Ga Mashie would remain vacant until further notice.

The state capital Accra and the Greater Accra region are subject to rapid change, but this is by no means free of conflict. Demographic changes due to migration and natural population growth, as well as land and property speculation, are increasingly contributing to political, socio-economic and ethno-religious tensions. The old Jamestown waterfront is a prime example of change and conflict.