The Congolese economy is determined by mining and the timber industry. The transport industry benefits from economic activities in the mining and forest regions. In the mining industry there are skilled craftsmen and service companies for the maintenance and repair of machines and processing plants.

There are no exact figures on the export of minerals, although the information situation has improved in recent years. The Sec. 1502 Dodd-Frank Akt prescribes the manufacturing industry to document exactly where the minerals come from, which are extracted in the war regions of the Democratic Republic of the Congo.

Local industry has stalled in many places. The entire industrial sector has been badly damaged by the economic decline and above all by the raging inflation since 1990. Simple shoes, cigarettes and drinks (lemonades and beer) are produced in the country. Almost all everyday goods – including many foods – have to be imported.

The decline of the local textile industry “Syntexkin” was particularly dramatic for the country. Several thousand workers lost their jobs over time. In 2008 the last production unit was closed. At the same time, Chinese imports displaced local products. 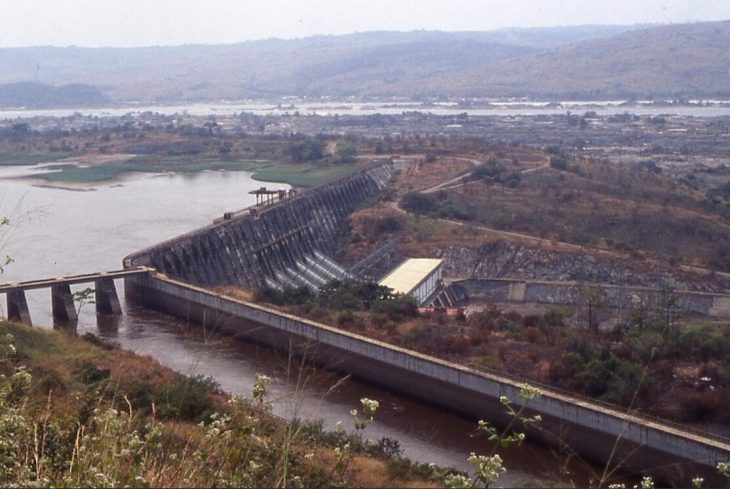 Inga I dam with branching canal to Inga II

The main source of energy in the Democratic Republic of the Congo are two hydropower plants. These two hydropower plants Inga I and Inga II, which dictator Mobutu had built in 1972 and 1982, are located on the Inga Falls, where the largest river in Africa, the Congo, falls over 100 meters. Large companies from the USA and Europe formed a consortium and granted the loans for these power plants, which primarily supply the ten million metropolis of Kinshasa with electricity.

The longest direct current line in the world runs 1,725 kilometers across the country from the hydropower plants to the Katanga raw material region in the southeast. Since it is very costly to transform direct current into alternating current, the cities connected to the line (with hundreds of thousands of residents) do not benefit from this energy source. Like almost all regions in the DR Congo, they remain without electricity.

The INGA power plants are to become the largest power plant on earth. In October 2013, South Africa signed a cooperation agreement with the Congolese government to expand INGA. Another – third – dam, INGA 3, has been planned for years, in which not only South African but also Chinese and various international consortia are involved. The start of construction is not yet known.

The permeability of the borders makes an exact quantification of the imports and exports of the Democratic Republic of the Congo difficult. After the economic decline of the 1990’s, local markets have developed strongly and now play a crucial role in the country’s economy.

Exports have been increasing continuously since 2002. Investments, growing revenues and the support of international donors for various development projects as well as the weakness of the national manufacturing industry and the agricultural sector also led to a steady growth in imports. The positive development of the trade balance, however, shows a reduced picture of reality. Most of the imports consist of consumer goods and the exports of raw materials / minerals. The economy today is based almost entirely on the export of industrial diamonds, crude oil, cobalt, copper, coltan, gold and rare metals.

The most important trading partners are Belgium, South Africa, Brazil, France, USA, Germany and India. Meanwhile, the PR China is playing an increasingly important role in international economic and trade relations. Especially in the race for raw materials and sales markets of the Democratic Republic of the Congo, China successfully competes with the Europeans. In September 2008, China signed lucrative business agreements with the DR Congo, a major country in African continent according to topb2bwebsites. The subject of the agreement is a business worth billions over a period of 30 years. The DR Congo wants to “guarantee their supply of raw metals” to a group of Chinese companies. In return, the Chinese want to carry out major infrastructure construction measures in the Congo.

Even if there are repeated delays in the implementation of the Sino-Congolese projects, China is still able to expand its economic influence. Today, China is one of the key players in the mining and import of minerals from the DR Congo.