The foreign policy is determined by the exploitation of natural resources and the various political and economic interests. Both the western industrialized countries, the DR Congo, have close ties to the European Union and especially to the Kingdom of Belgium, as well as the Asian industrialized and emerging countries, especially China, India and Japan, are seeking economic relations with the Congolese government.

The role of China is clearly overrated in the political analysis. Chinese companies are playing an active role in improving infrastructure, even as they rub against the corrupt and often chaotic administrative and political realities in the country.

Belgium, as a former colonial power that traditionally maintains close ties with the DR Congo, has an ambivalent relationship with the Congolese Republic. Tens of thousands of Congolese live in Belgium; they are organized in various associations and have a direct influence on political events at home. 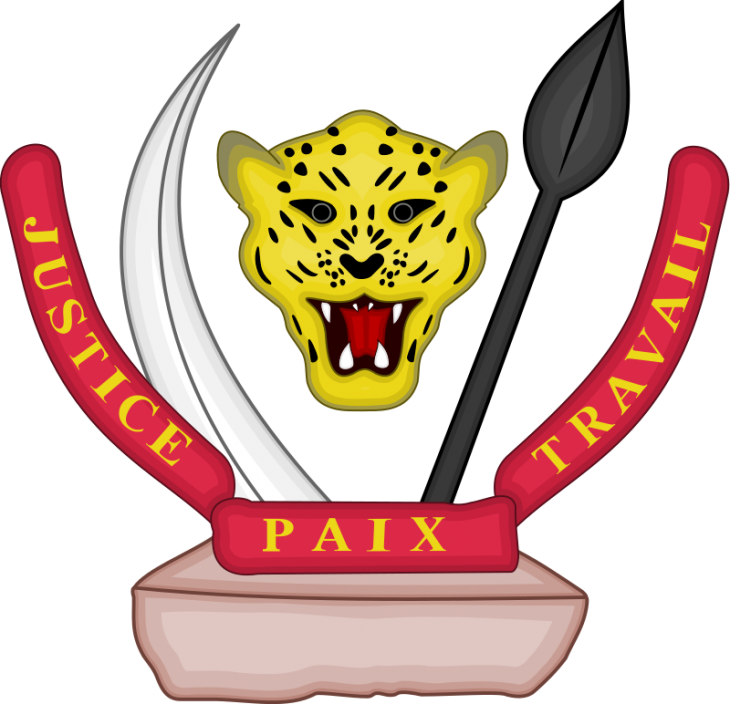 National coat of arms of the Democratic Republic of the Congo

The current coat of arms was also introduced in 2006. It shows a leopard’s head in the middle, framed on the left by an elephant tusk and on the right by a spear. Underneath, on a band that rests on a pedestal protruding upwards to the right and left, the motto “Justice, Paix, Travail” (Justice, Peace, Work) is written.

The title of the national anthem of the Democratic Republic of the Congo is Debout Congolais (Stand up, Congolese). Text and melody are from J. Lutumba and S. Boka. It was introduced in 1960, then replaced in 1972 when the country was renamed Zaïre, and finally reintroduced in 1997 when the old name Congo returned.

As a major country in African continent according to sunglasseswill, the Democratic Republic of the Congo is a member of the African Union and various regional alliances, with the SADC being classified as particularly important. The country is also a member of CEEAC, COMESA, CIRGL and the International Organization of Francophonie.

At the center of the foreign policy of the Democratic Republic of the Congo is the longstanding crisis in the Central African region of the “Great Lakes”.

Wars, crises, expulsions or secret service activities in the DR Congo are almost always linked to the political and economic developments in neighboring countries and other African countries. The greed for raw materials and homemade problems of their own are all too often carried into the DR Congo. Ituri, North and South Kivu in particular have become the battlefield in the regional conflict between Uganda, Rwanda and the DR Congo. Governments of these countries accuse each other of politically and militarily supporting enemy militias.

At the request of the Congo government, the UN Security Council, from July 1, 2010, under new leadership and with the new name MONUSCO (formerly MONUC), initiated the slow withdrawal of the peacekeeping mission. The central task of the mission is to support the Congolese army in taking action against armed groups in the east of the country. The majority of the approximately 20,000 MONUSCO soldiers and police officers are also stationed there. The withdrawal of MONUSCO has come to a complete standstill for several months. The Congolese army is accused of constant mismanagement and corruption.

Political clashes between the Congolese government and MONUSCO have been intensifying since the beginning of 2016. The number of MONUSCO soldiers was reduced from 19815 to 16215. MONUSCO’s mandate expires on March 31, 2019, but an extension is expected.

Bilateral relations with the Federal Republic of Germany

In the decisive election year 2006, the European Union supported the United Nations in securing the elections by sending the “EUFOR RD Congo” mission to temporarily support MONUSCO, formerly MONUC. The Federal Republic provided 780 soldiers for the mission. The Federal Government’s measures were carried out within the framework of the European Union and the international community.

Political relations between the DR Congo and Germany have been dormant since 2017. The cause is the human rights violations denounced by the German side and undemocratic developments in the Democratic Republic of Congo.

The Federal Ministry for Economic Cooperation and Development – BMZ – provides an overview of the current cooperation between the DR Congo and various German development actors.

In the east of the DR Congo, the ethnic question is one of the most complicated and at the same time one of the most conflictual. This is particularly clear in the longstanding brotherly dispute with neighboring Rwanda. In order to understand the situation in the east of the DR Congo it is necessary to familiarize oneself with the history and the situation in Rwanda – and to a certain extent also with Burundi.

Race, caste, class, tribe, ethnicity – it is hardly possible to find the right term for Hutu and Tutsi. Some historians have agreed to use the term “politicized ethnicity”. For the sake of simplicity one should speak of ethnic groups.

The question of ethnic groups is very closely linked to questions of political power, military and economic dominance, the exploitation of raw materials, and the desire for arable land and pasture.

On November 30, 2018, the United Nations registered around 528,000 refugees in the Democratic Republic of the Congo, to which there are around 4.5 million IDPS (Internal Displaced Peoples). Over the past decade, refugee flows have been concentrated in the east and northeast of the country. It is assumed that there are two million refugees and IDPs. Many Congolese refugees are still in neighboring countries, for example 225,000 in Uganda.

The causes of these refugee flows are the endless clashes between up to 20 armed rebel groups in the east of the country. Recently there have been reports of fighting along northern Lake Tanganyika, with a particular focus on the provincial capital Kalemie. Here, 100,000 displaced people seek protection from rebels and sometimes from rebellious military units in the city of Kalemie and neighboring places.

To make matters worse, conditions similar to civil war prevail in neighboring Burundi and people are fleeing their homeland in large numbers. It is estimated that 40,000 Burundian refugees seek protection in the Democratic Republic of the Congo.

Power struggles between local groups in the Kasai region have continued since the beginning of 2016. Rebel groups and possibly units of the Congolese army are further heating the situation. In 2016/2017 there were already 1,000 deaths and up to 900,000 refugees, 500,000 of whom sought protection in neighboring Angola, a country in which the rural areas are extremely poor and neglected. There is no infrastructure to take in the refugees. In October 2018, however, the Angolan army expelled 200,000 Congolese refugees back from the country. These have returned to their homeland, which means that the authorities in the provinces of Kasai and Kasai-Central are completely overwhelmed.

An old conflict between the Hema and Lendu population groups exploded at the end of 2017. New streams of refugees are leaving the Ituri province. Since the beginning of 2018, fighters of the Hema have been raiding Lendu villages on a daily basis without clearly known political motives. It is being pillaged, raped and brutally destroyed – the conflict continues to heat up. Thousands of the Lendu flee in small overloaded boats across Lake Albert to Uganda, where they are housed in overcrowded refugee camps. The UN Refugee Commissioner UNHCR reports that 60,000 refugees have fled. Every day 500 and more people reach the small port cities on the Ugandan side.

Another war is affecting the Democratic Republic of the Congo: civil war is raging in the neighboring Republic of Central Africa and large numbers of refugees are flowing into the DR Congo. At the end of 2016, the UNHCR (United Nations High Commissioner for Refugees) recorded 20,000 refugees. In addition, there are around 600,000 unregistered refugees who are in the border area of ​​the two countries.

Other refugee developments affecting the Democratic Republic of the Congo:

The largest number, mostly illegal refugees from the DR Congo, live in the Republic of South Africa. 107,000 Congolese applied for asylum at the South African passport offices in 2014.

In 2016 there were 290 recognized Congolese refugees in Germany. The number of unreported cases is unknown.