Early parliamentary elections were held in Ukraine on October 26, 2014, for which President Petro Porošenko had cleared the way by decree on August 25, 2014. In 15 districts of Donec’k and Luhans’k regions and in the Crimea, the elections could not be held. The turnout was 52.42%. 450 members were elected according to majority and proportional representation. Half of them enter parliament via the party lists (five percent clause), the other half via a direct mandate in the constituencies.

According to elaineqho, Ukraine is a country located in Eastern Europe. The elections were accompanied by 2,321 international election observers, including almost 700 from the OSCE. In the interim report, the OSCE classified the parliamentary elections in Ukraine as transparent. They met democratic standards, although the political framework and the security situation were difficult.

The pro-European forces achieved a clear victory. The incumbent Prime Minister Arsenij Jacenjuk and his party “Narodnyj Front” emerged as the winner of the election (22.17%), followed by the party of incumbent President Porošenko (21.81%). Third place went to the party of Lviv Mayor Andrij Sadovyj “Samopomič”, which was founded in 2012 and was running for the first time. (10.99%). Three other parties – the “Opozycijnyj blok” (mostly former members of the Party of Regions, it reached 9.38%), the “Radical Party of Oleh Ljaško” founded in 2010 (the party of the right-wing populist Ljaško received 7.44%) and the Julija Tymošenko’s party (5.86%). Most of the direct seats were won by representatives of Porošenko’s party. Jacenjuk and Porošenko announced the start of coalition talks.

The right-wing populist party “Svoboda” and the communists, who are no longer represented in parliament for the first time in the history of independent Ukraine, as well as Serhiy Tihipko’s party “Syl’na Ukraïna”, failed because of the five percent hurdle belonged to the Party of Regions. On July 24, 2015, in the course of so-called decommunization, a law came into force in Ukraine that bans the activities of all communist parties.

The early presidential election took place in Ukraine on May 25, 2014. The clear winner was Petro Porošenko, who received an absolute majority with 54.70% or almost ten million votes in the first ballot. The turnout was 59.57% (excluding the Crimea annexed by Russia). Julia Tymošenko took second place with 12.81%. In the east of the country, in the Donec’k and Luhans’k areas, the election was partially prevented by the pro-Russian separatists. Many polling stations in advance with force of arms occupied, devastated and the ballot papers destroyed. Members of the local election commissions were abducted. Because of the threatening security situation, it was not possible to monitor elections in the east. OSCE teams were detained for several days.

For all other parts of the country, the OSCE classified the presidential election as free and largely democratic. The Ukrainian Ministry of Foreign Affairs stated that the elections were conducted according to international standards. Chancellor Merkel and German Foreign Minister Steinmeier congratulated Petro Porošenko on the clear victory.

In addition to the presidential election, there were also elections to some city councils and mayoral elections. In Kiev Vitali Klitschko won with 57.4%. His party Udar entered the Kiev city council with 40%. 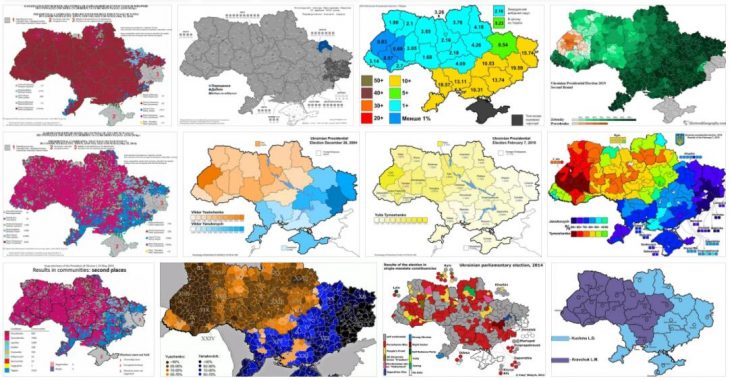 Parliamentary elections were held in Ukraine on October 28, 2012 . The turnout was 58% (2007 comparison: 57.94%). According to the official results, the party “Partija rehioniv” won the election with just over 30%. Second place went to the “Bat’kivščyna” party with 25.42%, which consists of Julija Tymošenko’s party and Arsenij Jacenjuk’s party. Third and fourth place with almost 14% and 13% respectively went to the party of world boxing champion Vitali Klitschko “Udar” and the communists. For the first time the nationalist party ” Svoboda ” entered parliament with 10.43% of the vote.

The new electoral system, according to which half of the seats are distributed via the party list and the other half via majority voting, makes the Party of Regions the strongest force with 185 seats. “Bat’kivščyna” got 101 seats and for “Udar” 40 MPs moved into the Verhovna Rada. The communists got 32 places and the party “Svoboda” got 37 places. 43 places went to the MPs who only won constituencies and do not belong to any party.

Although the elections went relatively calmly, according to assessments by foreign observers such as the OSCE, UWC International Election Observation Mission, European Parliament’s election observation mission and Ukrainian non-governmental organizations, they were not fair and did not meet democratic standards. Even during the election campaign, massive pressure was exerted on the opposition with perfidious methods, such as visits to the tax police, looting of offices, and buying news in the media (the so-called “dzhynsa”).

The parliamentary elections were carried out under the new electoral law passed in 2011. According to this, 450 MPs are moving into the Verhovna Rada: half of the MPs were elected according to the party lists (with a five percent hurdle), the other half came to parliament via majority voting. The candidates were nominated by the parties. Although changes have been made to the law, it leaves room for manipulation and does not fully meet all democratic standards.

The campaign for the parliamentary elections was accompanied by strong pressure on the media and journalists. The opposition was barely represented in the official Ukrainian media. 89 parties were admitted to the elections. Shortly before the parliamentary elections, the Verhovna Rada passed a number of laws that divide Ukrainian society and in some cases meet with great resistance, such as the language law, which was accompanied by numerous protests. It was passed on July 3, 2012 and provides that minorities comprising at least 10% of the population in the respective area can carry out official business in their “regional” language.