Rulers and power groups after the 2006 elections

Since the presidential elections on July 31, 2006, two relevant party platforms have formed: The AMP (Alliance pour la majorité parlementaire) around the PPRD (Parti du Peuple pour la Reconstruction et la Démocratie) and the UN (Union pour la Nation) on the party of the losing presidential candidate Jean-Pierre Bemba, the MLC. The AMP holds an absolute majority in the National Assembly with 332 out of 500 seats.

On June 8th, 2018 Jean Pierre Bemba was released by the International Criminal Court in The Hague after more than 10 years of imprisonment. He was originally sentenced to 18 years in prison. The Appeals Chamber’s verdict caused a sensation, with celebrations in Kinshasa and political anger flaring up among victims of violence in the Central African Republic.

Bemba, born in 1962, is party leader of the MLC (Mouvement de Liberation du Congo) and one of the colorful political figures of the Democratic Republic of the Congo. Bemba is known for doing “good business” under the dictator Mobutu and for having a close relationship with the current police chief of the DR Congo, General Amuli, who is known for his willingness to use violence.

From 2003 to 2006, Bemba was one of the four vice-presidents of the transitional government of the Democratic Republic of the Congo, a major country in African continent according to sportsqna. Even if Bemba’s rebel movement “MLC” became a political party, it always remained a violent paramilitary force.

In 2006/2007, Bemba and his followers of the MLC allied themselves with the power-addicted President of the Central African Republic, Ange-Felix Passé, via political wrong turns. There were those excesses of violence that led to charges before the International Criminal Court.

After the decision of the criminal court, Jean Pierre Bemba returns to the politics of the DR Congo and becomes a weighty opponent of President Kabila, who has been in power without a democratic mandate since December 2016.

The first government formation in February 2007 presented a bloated government team. The cabinet, which consists of 61 members, only got under way under 82-year-old Prime Minister Antoine Gizenga.

With the government reshuffle on February 19, 2010, the cabinet was reduced to 44 members.

Various politicians had already positioned themselves with regard to the presidential elections at the end of 2011. One of the best-known is above all the parliamentary president Vital Kamerhe, who resigned in 2009, who later broke away from him after initially supporting Kabila and finally took an increasingly combative position against him. Kamerhe’s goal of uniting the fragmented opposition in an electoral alliance was unsuccessful.

Before the 2011 elections, Etienne Tshisekedi, arguably the best-known historical opposition leader in the DR Congo, returned to the political stage after years of exile. Tshisekedi, President of Congo’s oldest opposition party, the UDPS (Union for Democracy and Social Progress), counts on supporters who traditionally come from the Kasai provinces in the interior and parts of the capital Kinshasa.

The next presidential and parliamentary elections took place on November 28, 2011. There were violent clashes in the run-up to the elections. According to the final results announced by the Supreme Court, incumbent Joseph Kabila won the presidential election with around 49 percent. The historic opposition leader Etienne Tshisekedi came in second with 33 percent. Representatives from all major opposition parties issued a joint declaration rejecting recognition of the election results.

On December 20, 2011, Joseph Kabila was sworn in for a new term of office, despite controversial election results and allegations of massive election fraud.

In the course of preparing for the election, President Joseph Kabila signed a controversial amendment to the electoral law at the end of June 2011. The runoff election was abolished, which significantly increased the chances of the incumbent president being re-elected. The expectations of the population and the international community were already very high after the first democratic elections (2006). Initially, Kabila did everything possible to feed these hopes. It promised roads, running water, electricity, education and work – and above all: peace. A high standard in a country that has suffered from war for years. Five years later, Kabila fell far short of expectations.

In 62,000 polling stations it was possible to vote from 18,864 candidates. 20,000 UN soldiers and 60 SADC observers attended the elections. Independent observers, including representatives of the European Union, the Catholic Church and civil society, spoke of massive election fraud. Up to three million votes are said to have been forged.

After endless debates on a possible extension of the mandate of President Josef Kabila beyond the 2011-2016 election period, the 2015/2016 election calendar was published on May 12, 2015: This calendar was not implemented. Power interests of a small political group and the general chaos were responsible for this.

Since the last official census took place in 1984, a new survey was planned since 2005 (estimated population 2016: 77.8 million). The opposition saw this as a tactical move by the government to endlessly delay the election date.

A prerequisite for a transparent election is of course the electoral register, which has been sought since the beginning of 2017. By the beginning of August 2017, 35 million voters out of 41 million eligible voters were recorded.

The conduct of the census was hindered, among other things, by disputes within ministerial jurisdiction. In addition, in the war zones, in the east and in the center (kasai) of the country, election preparations were not organizationally feasible.

On December 19, 2016, President Joseph Kabila’s legitimate term ended. With political tricks and rough action against political opponents, Kabila succeeded in preventing new elections and staying in power for the time being. 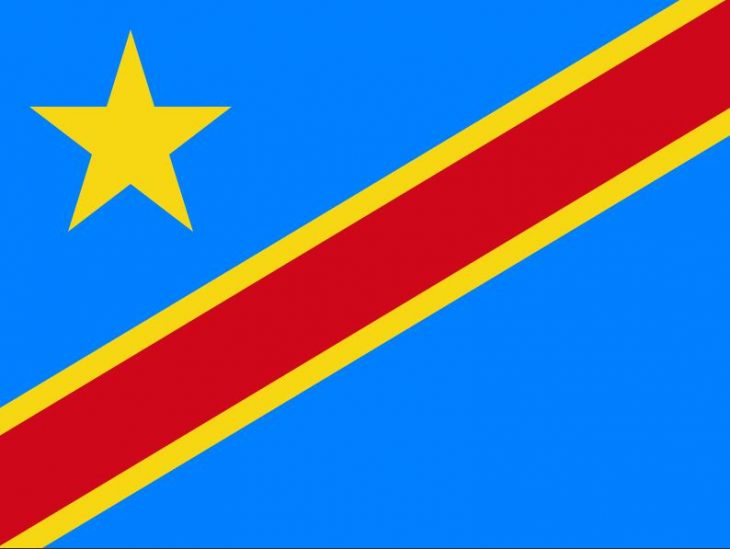 National flag of the Democratic Republic of the Congo

The new national flag of the Democratic Republic of the Congo came into effect on February 18, 2006, after the ratification of the new constitution. It was in use in a similar design from 1963 to 1971.

In 2017 there were repeated unrest and political demonstrations against the government and its various maneuvers to keep the president and his entourage in power.

Thanks to the intervention of the Catholic Bishops’ Conference and the moderation it provided, a civil war was prevented on New Year’s Eve 2016. At the last moment, an agreement was reached between the government and the opposition in which it was stipulated that the government would remain in office temporarily, that all elections would take place in 2017 and that a new president would be elected.

In July 2017, the government announced that there would be no elections in the Democratic Republic of the Congo in 2017. With a massive contingent of military and police forces, any resistance was nipped in the bud.

The Electoral Commission of the DR Congo (CENI – Commission électoral national indépendante de la République du Congo) presented the new calendar for the presidential and parliamentary elections on November 5, 2017. The final elections should take place on December 23, 2018. Civil society and especially the churches put considerable pressure on the Congolese government because this deadline should now be kept. The European governments, especially Belgium, France and Germany, are involved in the UN stabilization mission MONUSCO with financial support.