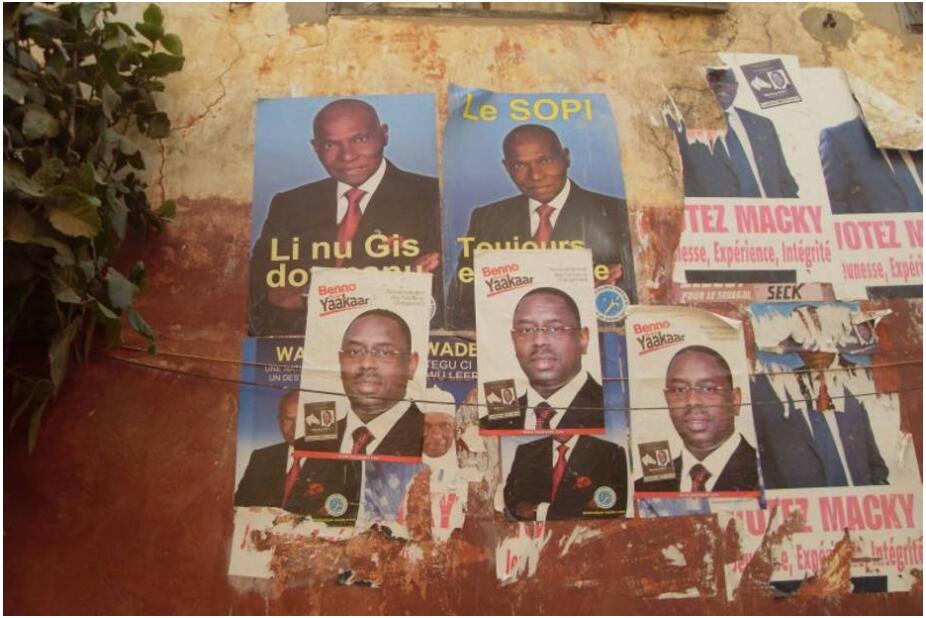 After Parliament President Macky Sall summoned Wade’s son Karim for a hearing in Parliament, he had fallen from grace and his mandate was reduced to one year in a farce of law changes. Trust in the country’s democratic institutions had sunk to an all-time low at the end of 2008, and the population was no longer able to feel the enthusiasm of the millennium.

In the local and regional elections on March 22, 2009, the governing coalition suffered heavy losses for the first time, and in the same year the Economic Commission for Africa counted the former democratic model country among the seven countries on the continent in which democracy has declined the most. The most important domestic political issue over the past few years has been the 2012 presidential election, alongside which other and much more urgent issues were ignored.

In recent years there has been a growing dissatisfaction with President Wade’s leadership style and arbitrary decisions. In addition, the difficult living conditions, rising food and fuel prices as well as the occasionally catastrophic electricity supply led to increasingly violent protests in the cities and the emergence of important civil society movements.

In June 2011, protests finally broke out into the heaviest protests since Alternance 2000. Under street pressure, President Wade was forced to withdraw a bill that would have meant that the president could be elected with only 25% of the vote in the first round. From these protests the protest movement M23 was born.

Senegal is one of 16 countries located in Western Africa according to themeparktour. After months of quarreling, the efforts of the large opposition alliance Bennoo Siggil Senegal to put up a candidate for unity failed, which drastically reduced the alliance’s chances of victory and ultimately won Macky Sall in the first ballot.

Wade had already announced in 2009 that he wanted to run for a third mandate, although various civil society associations as well as opposition parties questioned the legality of the incumbent’s candidacy. The discussion about the constitutional conformity of the candidacy dominated the domestic political discussion in the last two years before the elections and was ultimately validated by the Constitutional Court using a loop.

On January 27, 2012, the Constitutional Council announced the candidates eligible for election. The validation of Wade’s controversial candidacy led to serious unrest in Dakar and other major cities. The candidacy of the pop star Youssou Ndour, however, was rejected. Three former Prime Ministers Wades and the leader of the former socialist ruling party ran against Wade in the presidential election. The weeks before the first ballot on February 26th were marked by violent clashes between often youthful demonstrators and the law enforcement officers in all of the country’s larger cities, in which at least 10 people were killed. The first ballot even proceeded peacefully with a turnout of only 51.58%. Abdoulaye Wade came out in second place with 34.81% of the vote, followed by Macky Sall with 26.58%. For the runoff election on March 25th, the 12 defeated candidates in the first round of voting stood behind Macky Sall and formed the “Benno bokk Yakaar” (“We share one hope”) alliance. 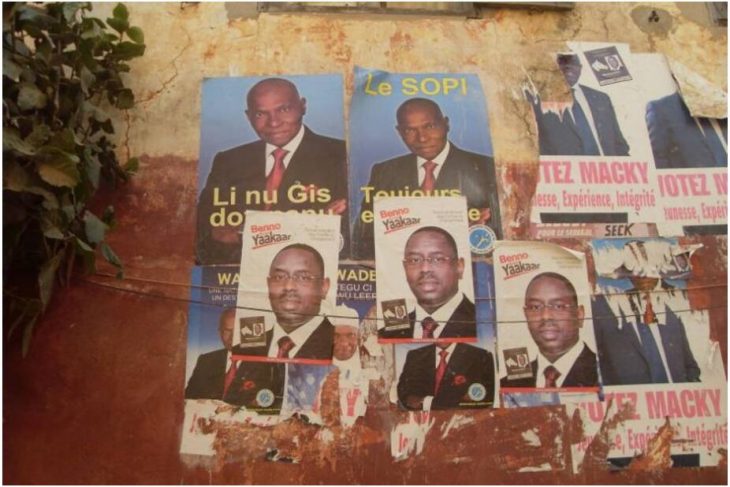 Election posters – the president and his challenger

Macky Sall won the runoff election on March 25 with an overwhelming majority of 65.8% against Abdoulaye Wade (34.2%). After the first unofficial election results were announced on election evening, Wade congratulated his opponent on his victory.

The first government under Prime Minister Abdoul Mbaye consisted of representatives from all political camps of the campaign alliance. Macky Sall kept his election promise to reduce the large number of departments to 25 ministries and in May almost 60 state structures were abolished for reasons of efficiency and economy.

In the 2019 presidential election, Macky Sall became the incumbent with a not uncontroversial election result of over 58.5 of the votes confirmed.

In the parliamentary elections on July 1, 2012, the ruling coalition “Benno Bokk Yakaar” (APR, PS, AFP and some other small parties) won 119 out of 150 seats, while the former ruling party PDS only achieved 12. Nine parliamentary seats went to small religious parties. The law on gender parity was implemented for the first time in this election and resulted in a 42% share of women. At just 36.6%, voter turnout was much lower than in the presidential election.

The first important government reshuffle took place in October 2012 and the structure of the consensus government began to crunch more and more often.

On September 1, 2013, the president dismissed the entire government with a bang. The previous Minister of Justice, Aminata Touré, was appointed Prime Minister and important portfolios were newly appointed, with key ministries being assigned to the President’s party, the APR.

The local elections on June 28, 2014, where the ruling coalition BBY felt the dissatisfaction of the voters, especially in the urban centers, were an important test of power. Some high-ranking members of the government were defeated by representatives of the opposition in their constituencies, so that President Sall rebuilt his government, sacked Premier Touré and through his long-time confidante Mahammed Dionne replaced. This is how President Sall reached his third prime minister just under two years after taking office. Six more ministers had to leave and Macky Sall took the opportunity to increase the government to 33 members and appoint an additional 6 state secretaries. Critics accuse Sall of having broken his election promise of lean structures.

One of the greatest domestic political problems that President Sall must concentrate on solving is the Casamance conflict, which has been simmering since the mid-1980’s.

President Wade had already made a peaceful solution one of the top priorities of his first term in office, but de facto nothing changed about the precarious situation in the southern part of the country despite a peace treaty signed on December 30, 2004. In the last few years before the change in power in 2012, the conflict had violently flared up again. In the run-up to the elections, the rebel movement MFDC even stepped up the attacks, resulting in numerous deaths among the military and civilians.

The Casamance conflict was always fueled by the neighboring countries Guinea-Bissau and Gambia, which partially supported the rebels or at least offered them opportunities to retreat across the border.

The civil population suffered, of course, villages had to be evacuated, fields and open land are mined and the once flourishing region is economically on the ground.

Macky Sall has declared the Casamance Economic Pole as a pilot region for the decentralization reform process and priority for peace in the troubled region. At the beginning of 2015 the situation eased, but it remains to be seen whether it will turn into a peace agreement. And of course there can be no sustainable development of the region without lasting peace. 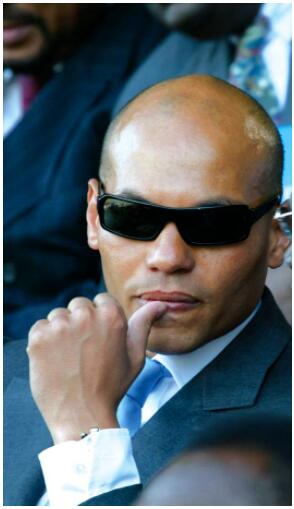 Dealing with cases of corruption and embezzlement of the old regime is also one of President Sall’s priorities. To this end, the President has revived the Court of Justice founded by Abdou Diouf in the 1980’s to repress illegal enrichment.

With great public and media attention, former dignitaries of the old regime were summoned to hearings and, in January, three former Wade-era ministers, including former Interior Minister Ousmane Ngom, were stripped of their parliamentary immunity.

The process against Wade’s son and former “super minister” Karim caused the greatest media coverage. Acted for a long time as a potential successor to President Wade, from head of the agency for the preparation of the Islamic Summit 2008 to “super minister”, initially for spatial planning, international cooperation, air transport and infrastructure, then also for energy, which rises to almost half of the state budget Karim Wade faced allegations of embezzlement for years. In April 2013, the former influential politicians of Senegal was in custody taken. A year later, in April 2014, the preliminary investigations were completed and Karim Wade was brought to the court to hand over. The court for the repression of illegal enrichment initially assumed private assets of dubious origin in the amount of around one billion euros (which represents around a third of the Senegalese state budget); most recently, Wade was accused of illegally accumulating the equivalent of 185 million euros. At the beginning of August 2014, Karim Wade’s highly politicized trial finally began in Dakar. On 23 March 2015 Karim Wade was to six years imprisonment and a fine amounting to 209 million euros sentenced.