According to softwareleverage, the Democratic Republic of the Congo is a constitutional state. The legal system was determined in close alignment with Belgian law. In practice, the legal system works very poorly. There is very limited legal certainty. The causes are manifold: excessive corruption, post-pushing and bad pay at all levels as well as insufficient training, pay and discipline of the police.

As a result, the judiciary in the Democratic Republic of the Congo is largely blocked. As a rule, those who can pay most for their supposed right are right. There was a notable exception on December 15, 2017 when the politician Frederic Batumikes was publicly charged with brutal rape.

Massive violations of rights by the Congolese military occur time and again in the east of the country. As a measure to defuse the situation, the Konrad-Adenauer-Stiftung organizes advanced training events on legal standards in the army.

Traditional law is particularly important in rural areas, where local disputes are settled by the traditional decision-makers.

Democratization and elections for political stabilization

On July 31, 2006, presidential elections and elections to Congo’s provincial parliaments took place. For the first time in over 40 years, almost 26 million eligible voters had the chance to participate in their political future in free elections. The incumbent head of state Joseph Kabila won the presidential election with over 58 percent of the vote. His challenger Jean-Pierre Bemba achieved just under 42 percent.

With a very high turnout (75 percent), the course of the first ballot was relatively calm. The outbreak of violence, which had been feared in advance because of the tense situation, had not materialized thanks to a massive international effort.

The presidential elections were seen as the acid test for the country’s future. In the meantime, however, hope has been clouded considerably. One of his most important promises, pacification in the East, has not yet been implemented by President Kabila.

The political and military situation in the region was extremely tense even after the elections on July 31, 2006.

General Laurent Nkunda, leader of the National Congress for the Defense of the People (CNDP), was one of the key figures in the conflict structure in Eastern Congo until 2009. Nkunda is a member of the Banyamurenge ethnic group, a Rwandan Tutsi minority in the Kivu provinces from which he also recruited fighters. In 2004 the former ally of neighboring Rwanda rejected the transitional government negotiated between the Congolese government and rebel groups and withdrew to the province of North Kivu. From there he controlled a large catchment area, which his troops in the fight against both the Congolese government army and the second rebel group FDLR (Forces démocratiques de liberation pour le Rwanda) defended.

After failed peace talks, a ceasefire and an internal split within the CNDP rebels, the Rwandan government reported the arrest of Nkunda on January 22nd, 2009 on Rwandan territory, near the border with the Congo. This was followed by a political agreement between the long-standing conflict countries Rwanda and the DR Congo, which led to significantly improved relations and cooperation in the fight against the FDLR Hutu militias.

In the eastern Congolese provinces of North and South Kivu – despite improved relations – the conflict continues. Supported by the UN mission “Monusco”, the Congolese national army is still fighting there against rebel groups around the FDLR and Mayi-Mayi.

The army is a decisive power factor in the DR Congo. The 140,000 strong FARDC (Forces Armées de la République Démocratique du Congo), however, suffers from chaotic conditions after decades of dictatorship and civil wars. The army command is disorganized, the equipment is archaic and the soldiers are poorly trained. The equivalent of around 20 US dollars is completely inadequate and regularly stays off for several months a year. This leads to serious attacks on the civilian population, perpetrated by out-of-control and undisciplined army personnel. A much-needed reform of the army has been on the agenda for years. So far, this reform process has not really got off the ground despite the participation of international actors.

The army is a key political actor. On June 30th (Independence Day) it presented itself despite all its weaknesses and inadequate structures and equipment.

Mobutu has made corruption, which is ubiquitous today, a fundamental principle of social and political life in the country. Regarding the so-called Article 15 of the Constitution, the then President declared: “Strike your way through”; “Help yourself” (débrouillez vous!).

Often one has the feeling that the whole country lives only from and through corruption, whereby the system is almost always at the expense of the disadvantaged. For example, soldiers and village teachers often only receive 20% of their salary, pensions do not even reach the elderly and the courts usually only function with inexplicable “fees”. No area of social life is free from corruption. Economic initiatives suffocate on it. At the same time, the words transparency and anti-corruption are on everyone’s lips and are not missing in any political discourse.

As part of corruption research and targeted corruption monitoring, awareness of the topic is increasing – a first step towards solving problems.

The corruption index determined by Transparency International places the Democratic Republic in 168th place out of 180 (2019). 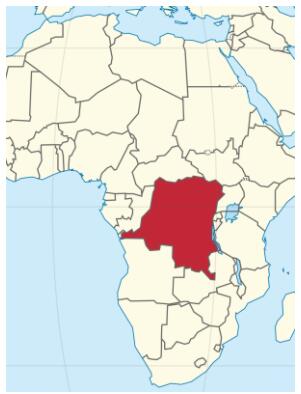 DR Congo – in the heart of Africa