Want to become a dentist, dental assistant, dental hygienist, dental nurse, dental technician, or dental therapist?  The following schools of dentistry in Illinois offer pre-dental studies, general dentistry, dental assisting, and dental hygiene studies towards a bachelor’s , master’s, doctorate, or a professional degree. Please know that some Illinois dental schools also provide certificates or postgraduate training in general dentistry. Check the following table for street address and official website of each school of dental medicine in the state of Illinois. 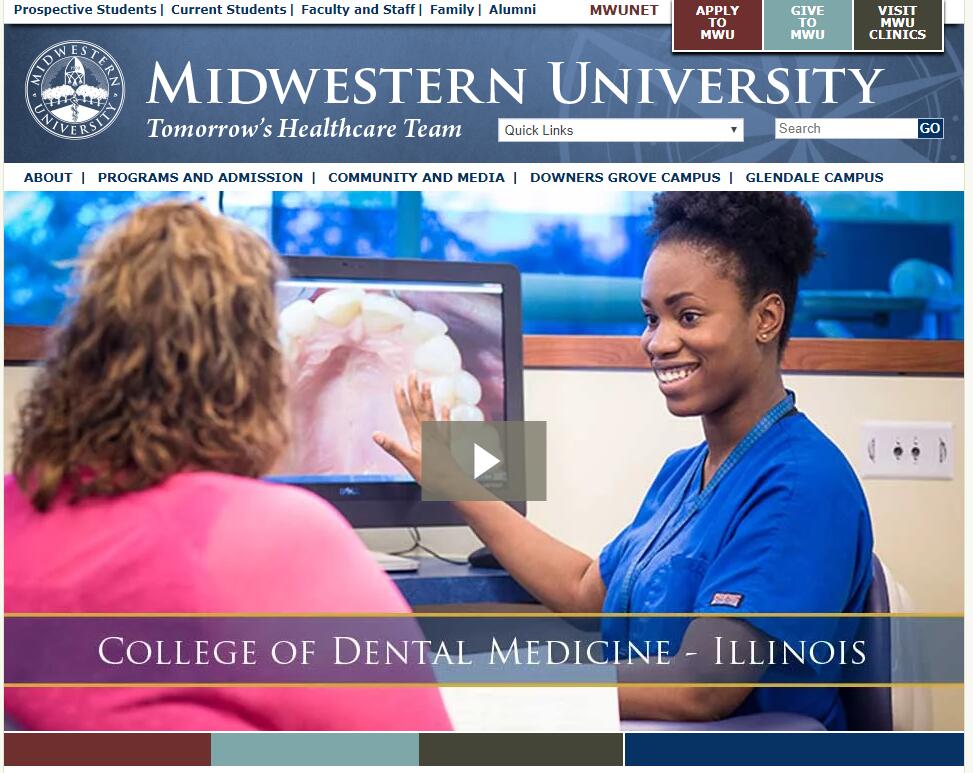 Illinois is located on the territory of the Great Plains, most of it is rolling plains, highlands rise only in the northwest. The northern and central districts of the state are occupied by prairies (hence the nickname of Illinois – “The Prairie State”), in the south there are more forests.

Illinois has a humid continental (and subtropical in the south of the state) climate with hot summers and cool winters. Precipitation falls all year round, but most of the rain is in late spring and early summer. The vast water surfaces of the Great Lakes have a significant impact on the weather.

The first Europeans to explore the lands of the “Prairie State” were the French Jacques Marquette and Louis Jollier in 1673. In 1680, not far from the modern city of Peoria, the famous French pioneer René de La Salle founded the first European settlement in Illinois – Fort Creveker (though it existed for only a few months).

The French practically did not master the “Country of Illinois” (as they called at that time the territory of the modern states of Illinois and, in part, Indiana and Missouri), limiting themselves only to hunting and trading with the Indians. The very name “Illinois” appeared with the first Catholic missionaries, this is how the French recorded the name of the Indian peoples who lived here. It is supposed to be a corruption of the Algonquian language, which meant “he talks like he always does.” The name of the state later came from French into English. And the rights to the lands of Illinois (as well as to all the North American colonies of France, located east of the Mississippi River) passed to Great Britain in 1763, after the end of the French and Indian War.

During the American Revolutionary War, the British were forced out of the region by Kentucky militias. In 1778, the government of Virginia announced the incorporation of the lands of Illinois into the state. In 1787, the US Congress decided to create the Northwest Territory, bounded by the Appalachians to the east and the Mississippi to the west, as well as the Great Lakes to the north and the Ohio River to the south. The new territory of the United States included, among other things, the lands of Illinois. In 1800, Illinois (together with the present-day states of Indiana, Wisconsin, and parts of Minnesota, Michigan, and Ohio) became part of the Indiana Territory. isolated from the Northwest Territory. In 1809, the US government created the Illinois Territory, which included, in addition to Illinois proper, Wisconsin, eastern Minnesota, and western Upper Michigan. On December 3, 1818, Illinois became the twenty-first state of the United States.

In 1803, Fort Dearborn was built on the shores of Lake Michigan, around which the city of Chicago gradually grew, which today has become the largest city in Illinois (about 2,700,000 residents) and the third most populous US metropolis (about 9,460,000 people). The state capital, Springfield, has about 115,000 residents.

Illinois is one of the most economically developed states in the US, and its economy is highly diversified. Chicago is one of the largest financial and commercial centers in the United States. There are stock and commodity exchanges, many commercial banks, brokerage and insurance companies. Several Fortune 500 companies are headquartered in Chicago and its suburbs. The Prairie State is part of the Grain Belt “The United States, respectively, occupying one of the first places in the country in terms of production of various grains and legumes. Various industries are well developed in Illinois, including food, engineering, and petrochemicals. Favorable geographical location has made Illinois (and primarily Chicago) one of the largest transport “intersections” of the United States.