Bolivia’s roots go back much further than the arrival of the Spaniards or the Inca Empire. According to thesciencetutor, it is no coincidence that Peru and Bolivia are considered the cradles of the pre-Columbian civilization in South America. This is important to keep in mind, because today’s indigenous population (Aymaras, Quechuas, Guaranís, etc.) derives their identity to a large extent from their Indian past and only partly from the fact that they are Bolivians.

The first human traces in the Andes are around 10,000 BC. Proven. But the time from 1,500 BC applies. With the cultures of the Wankarani, Chiripa and Pucara as the “formative period” in which the first permanent settlements arose. This time extends up to about the year 200 CE and is the basis of the later Andean high cultures. The most important of these in today’s Bolivia was the empire of Tiahuanaco, which existed around Lake Titicaca from approx. 200 to 1200 AD and was characterized by monumental stone buildings and figures. Its influence reached from the Pacific in Peru over the north of today’s Chile to far into Argentina.

After its gradual decline, the Aymara “principalities” (Señoríos Aymara) followed, until around 1400 the Quechua-speaking Incas of Cusco from their “Empire of the Four Worlds” or Tawantinsuyo expanded further south and the Andean part of today’s Bolivia as Kollasuyo incorporated into their empire as the southeastern part. In its heyday, the Inca Empire stretched from Pasto in the south of what is now Colombia to the Maule River in what is now central Chile – over a length of around 5,000 km. The Inca Empire was a high culture with an agriculture that was optimally adapted to the geographical, topographical and climatic conditions. This ensured self-sufficiency for the population, the various areas of the country were connected by wide paved roads and an effective administrative system existed. The monumental buildings – erected without bikes, wagons or draft animals – and the accomplished handicrafts still fascinate people from all over the world.

The plurinational state of Bolivia

From January 22, 2006 until her resignation on November 10, 2019, President Evo Morales – coca farmer and leader of the “social movements” – and Vice-President Álvaro García – former guerrilla, ruled and radical left intellectual – the country. It is unique in the history of the country that a politician with indigenous roots has come to power. Shortly after taking office, President Evo Morales began the establishment of the new plurinational state, which was announced before the elections. This “re-establishment” of Bolivia was the key element for the profound change process initiated by the Morales government (proceso de cambio). Its aim was to strengthen the rights of the indigenous peoples and the rural population in general as well as to anchor the leading role of the state in economic and social development.

One of the cornerstones of the change process related to the convening of a legislative assembly on August 6, 2006, which was supposed to pass a new constitution by December 2007. One of the major points of contention between the government and the rich lowland department of Santa Cruz is its demand for more self-determination. To force this, the Santa Cruz regional government organized a referendum in May 2008 in which 86% of the electorate voted against the policies of the central government in La Paz.

So a confrontation with the local elite as well as with foreign interests was inevitable. In September 2008, the US Ambassador Philip Goldberg was expelled from the country. He was accused of supporting the opposition and dividing the country. As conflicts between supporters of the government and members of the opposition continued to spread, government buildings were stormed in the various regions and natural gas companies were occupied.

Nevertheless, on January 25, 2009, 61.4% of Bolivians adopted the new constitution through a referendum. The form of government of the country and the functioning of the democratic system are regulated according to the plans of the Morales government in the 2009 constitution (German translation) (which replaces the 1994 constitution). The new constitution regulates the re-establishment of Bolivia and defines the country as a “uniform communitarian-plurinational constitutional and welfare state”. It is a presidential democracy with a bicameral parliament (Senate and House of Representatives), which together form the plurinational assembly, and the judiciary, which is located in Sucre.

Administrative structure and range of parties

The country consists of 9 departments, which are divided into 112 provinces and 342 municipalities. The departments and municipalities were given more autonomy as part of the decentralization reforms in the mid-1990’s with the laws on public participation (1994) and administrative decentralization (1995). The departments were further strengthened by the first direct election of the governors (gobernadores) on December 18, 2005. With the introduction of the new constitution, the existing autonomy was expanded, so that there is now additional regional and indigenous autonomy. Regions and indigenous groups can be autonomous within a department.

Since 2005 the party landscape has undergone a complete restructuring. With the aforementioned “re-establishment” of Bolivia, the traditional political parties play a much smaller role in political developments. The traditional spectrum of parties included the Movimiento Nacionalista Revolucionario, MNR, founded by the former President Paz Estenssoro, the conservative Acción Democrática Nacional, ADN, and the left-wing Movimiento de Izquierda Revolucionaria, MIR. To this end, new parties have entered the political stage since the 1980’s, such as the Movimiento Bolivia Libre, MBL, and Movimiento Sin MiedoMSM (Movement Without Fear) and the party of the current President Evo Morales, Movimiento al Socialismo, MAS. In addition, the government of Evo Morales relied on the various trade union and rural representative organizations that are commonly subsumed under the heading of “social movements” in political discourse. The relationship with the organizations of the indigenous high and lowland population has experienced various ups and downs and has recently been extremely conflictual. 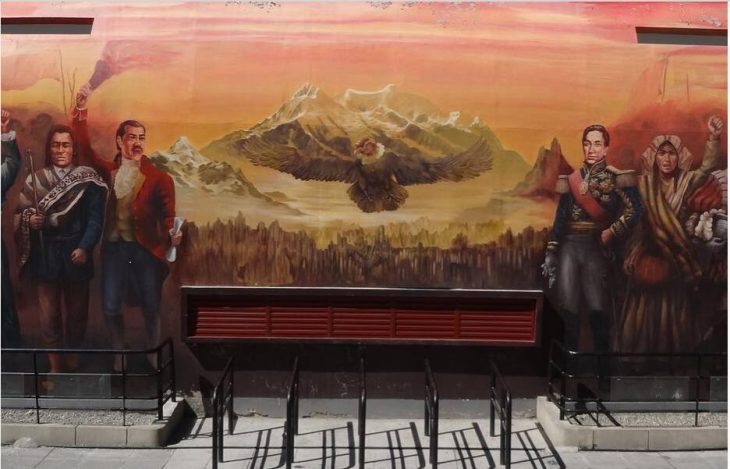