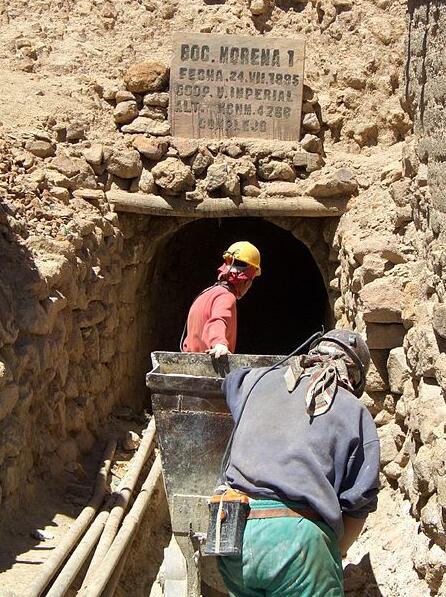 Mine entrance in Potosi 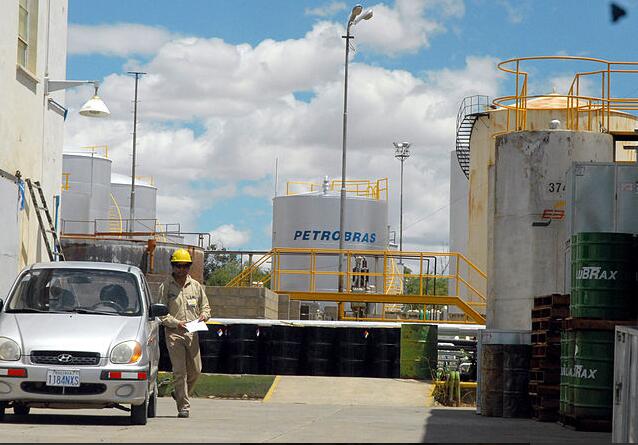 Until a few years ago, Bolivia’s foreign trade situation had developed positively for almost a decade. In 2016, the country’s most important exports were natural gas (32%) and traditional export products such as minerals (tin, zinc, gold and silver are particularly important here). At the same time there were important exports outside of this traditional export area, called non-traditional products by the Bolivian statistical office. The most prominent in this category were soy, Brazil nuts, quinoa, chia seeds, bananas, sunflower, oil and leather products.

Also noteworthy is the slowly increasing share of trade with neighboring countries, in contrast to a decline in trade with the USA, once the most important trading partner. In 2017, Bolivia’s exports went to Brazil with 18.5% and Argentina with 15.7%. These two countries currently buy all of the natural gas exported by Bolivia, as well as non-traditional products such as quinoa, Brazil nuts, bananas, soy and oils. The third most important trading partner of Bolivia is now South Korea with 8%, ahead of the USA with 7.5% and Japan with 7% of exports. Even in spite of the deteriorated relations, mainly chia seeds, quinoa and Brazil nuts, as well as gold jewelry, go to the USA.

Overall, Bolivia had a positive balance in its international trade balance by 2014. However, the Bolivian Institute for Foreign Trade (Instituto Boliviano de Comercio Exterior, IBCE) recently published a report on Bolivian trade that suggests a less positive trend for the next few years. This expectation has now been confirmed for 2015 and 2016. While exports were still US $ 11.5 billion in 2012, they had fallen to around $ 8 billion in 2017. This contrasted with imports of a little more than $ 9 billion.

From 2015, Bolivia experienced a slump in exports, which came after almost ten years of above-average positive development. Between 2005 and 2014 Bolivian exports grew by around 5.39%. In 2015, however, it was down 32%, with a plunge from $ 12.9 billion to $ 8.7 billion. The main reason for this is the collapse in international oil prices. These are of central importance for Bolivia, as the price of the most important export good (natural gas) is linked to the oil price. Exports fell further from 8.7 billion US $ in 2015 to 7.2 billion US $ in 2016 (provisional figure). Imports also fell significantly in the same period from 10.5 (2014) to 9.7 and most recently 8.4 billion US $, but are now higher than exports.

Among the Bolivian departments, the strongest exporters are Tarija (33%), Santa Cruz (25%), Potosi (17%) and La Paz (10%), because these are also where natural gas and minerals are found. The other departments (Beni, Cochabamba, Chuquisaca and Pando) only play a marginal role here.

At the regional level (with Mercosur, whose members also include Argentina and Brazil), trade is around 4 billion US dollars. Trade with NAFTA (of which the US is a member) is $ 1.1 billion. Most business for products beyond natural gas, however, is done within the Association for Latin American Integration (ALADI); here Colombia and Peru are Bolivia’s two most important Latin American trading partners. The trade in soy, soy oil, sunflower oil, gold jewelry, precious stones, bananas and leather as well as chia seeds, quinoa and Brazil nuts between ALADI and Bolivia is worth over US $ 5 billion. China, Japan, South Korea, Belgium and India are also not insignificant buyers of these products.

In 2016, a country located in South America according to politicsezine, Bolivia only imported goods worth 8.4 billion US dollars. In 2015 it was still worth 9.6 billion US dollars and in 2014 it was even worth 10.5 billion US dollars. In 2017, the value of 2015 was reached again at US $ 9.3 billion. Imports for the year focused on capital goods, intermediate products, raw materials and consumer goods, mainly from China (21.8%), Brazil (18%), Argentina (12.5%), USA (8%), Peru (6th, 5%) and – quite far behind – Germany (2.3%). First of all, imports are still diesel and gasoline. Iron products, machines for various purposes, transport vehicles and their spare parts, and medicines are also imported, as well as food, flour and meat.

Contrary to the latest estimates by the IMF and World Bank, the Bolivian government continues to assume optimistic forecasts for the future. This positive assessment is based on the planned strong state investments, which in turn are based on the good tax revenues and the well-filled state coffers – here, above all, the unusually high international reserves are to be considered; according to the last IMF report, they amounted to 13% of GDP in 2015. As already mentioned, these currency reserves have been reduced by more than a third in the last three years in order to at least approximately offset the effects of the fall in raw material prices.

In the area of multilateral donors, Bolivia has borrowed money mostly from CAF (Development Bank of the Andean Community), BID (Inter-American Development Bank) and World Bank, and bilaterally from Venezuela, Brazil, South Korea and, increasingly, from China. In particular, there is often no reliable data available on the level of debt with Venezuela and China. The German share of total bilateral debt is around 1.5%.

The state oil company YPFB and the Bolivian state itself have mostly benefited from this debt. But the regional governments of La Paz, Santa Cruz, Tarija and Potosi have also benefited from it.