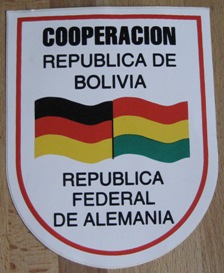 At the heart of the reform policy of the former President Sánchez de Lozada (1993-97) was the ” Participación Popular ” (People’s Participation Act). It transferred decision-making authority for health, schools, road construction, irrigation and culture to the communities. In order for them to be able to perform these tasks, a considerable part of the tax revenue is available to them today. At the same time, the “Participación Popular” strengthened the political influence of the villages and indigenous communities by giving them the right to have a say in the new funds.

In 2006 the Morales government decided on the Plan Nacional de Desarrollo (National Development Plan), in which the fight against poverty and exclusion is an important aspect of development policy. In 2012 a new plan was adopted, the Plan de Desarrollo Economico y Social 2012-2015, which will be continued in the subsequent five-year National Development Plan 2016-2020. This should determine the policy of the Morales government in relation to poverty, emphasizing the communitarian and independent character of the state, the abolition of exclusion and the strengthening of equality.

As a country located in South America according to physicscat, Bolivia has celebrated many successes in fighting poverty in recent years. The UN points out, among other things, the reduction in poverty by 12% between 2005 and 2009. In March 2012, the United Nations congratulated President Morales on his accomplishments in his efforts to fight poverty. In the Human Development Index, which takes life expectancy, education and standard of living into account, Bolivia ranks 114th out of 187 countries (HDR 2018).

Nevertheless, with an annual per capita income of around US $ 7,330 (World Bank for 2017), Bolivia is still one of the poorest countries in South America. According to calculations by the National Statistical Office (INE), poverty was around 45% in 2011. Rural poverty was as high as 61%, while the number of poor in urban areas averaged 37%. In addition, the extremely unequal distribution of income was 0.47 for the entire country and 0.54 for the rural regions of the Gini coefficient.

The Morales government has taken this trend further with the help of revenue redistribution policies. The direct transfer of funds for school children, mothers and retirees has directly affected the lives of these people.

Bolivia and the Sustainable Development Goals of the 2030 Agenda

The 2030 Agenda, adopted by the General Assembly of the United Nations in September 2015, comprises 17 Sustainable Development Goals (SDGs for short). These follow the development goals of the millennium, which were adopted for the period from 2000 to 2015, but, in contrast to these, are now set up for both the countries of the South and the North. They thus form the orientation for the development efforts of each individual country and at the same time the framework for German development cooperation with Bolivia.

In addition to the core topics of eradicating poverty (SDG 1), eradicating hunger (SDG 2) and health (SDG 3), a number of other topics on human development and the protection and preservation of the environment were prioritized in the sustainable development goals and given a total of 169 sub-goals. From the point of view of the Bolivian government, however, the national long-term development strategy has priority. This was formally adopted as the “ Patriotic Agenda 2025 ” at the beginning of 2015 and consists of 13 “pillars”. The corresponding development goals can be found in the current national development plan PDES (Plan de Desarrollo Económico y Social) 2016-20.

Both development strategies coincide in many respects, as an overview prepared by the United Nations Development Program in Bolivia shows. Apart from the shorter duration (2025 will be the 200th anniversary of the founding day of the Republic of Bolivia), the Bolivian “agenda” differs essentially in its anti-capitalist and anti-colonial rhetoric; There is a strong emphasis on national sovereignty and independence. Bolivia has also declared that it will limit its reporting to the UN to those points of the SDGs that are in line with its own Patriotic Agenda 2030.

Bolivia is the focus of development cooperation between various bilateral and multilateral institutions. The share of ” Official Development Aid ” (ODA) in GDP has decreased according to data from the ” Human Development Report ” from 2007/08 (1990 at 11.2% and 2005 at 6.2%). The World Bank gives the value for 2014 at only 2.1%. The Inter-American Development Bank (BID / IADB) is the largest lender in Bolivia.

About the activities of the World Bank and about its projects and programs. The European Union has also drawn up a Country Strategy Paper in cooperation with Bolivia and is carrying out various projects. In addition to German, Japanese, Spanish and Swiss development cooperation are strongly represented in the country. The US USAID has not been active in the country since 2013 at the request of the Bolivian government.

For many years, the focus of German development cooperation with Bolivia has been on administrative and judicial reform, the promotion of civil society activities, water supply and sanitation, and sustainable agriculture. Activities are currently concentrating more on the technical areas of water supply and wastewater disposal, sustainable and climate-resilient agriculture and the promotion of renewable energies.

The KfW and GIZ support projects in these areas. The political foundations such as the Konrad Adenauer Foundation, the Hanns Seidel Foundation and the Friedrich Ebert Foundation maintain offices in La Paz and oversee numerous projects on site. CIM provides personal cooperation with numerous integrated specialists. The German-Bolivian Chamber of Industry and Commerce (AHK Bolivia) has extensive information on economic cooperation on its website, including the program/Development partnerships with the private sector (public-private partnerships).