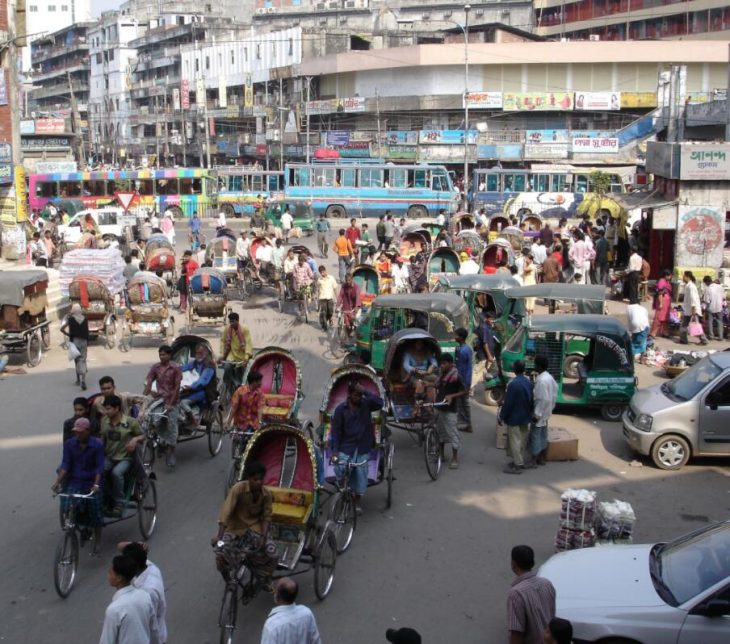 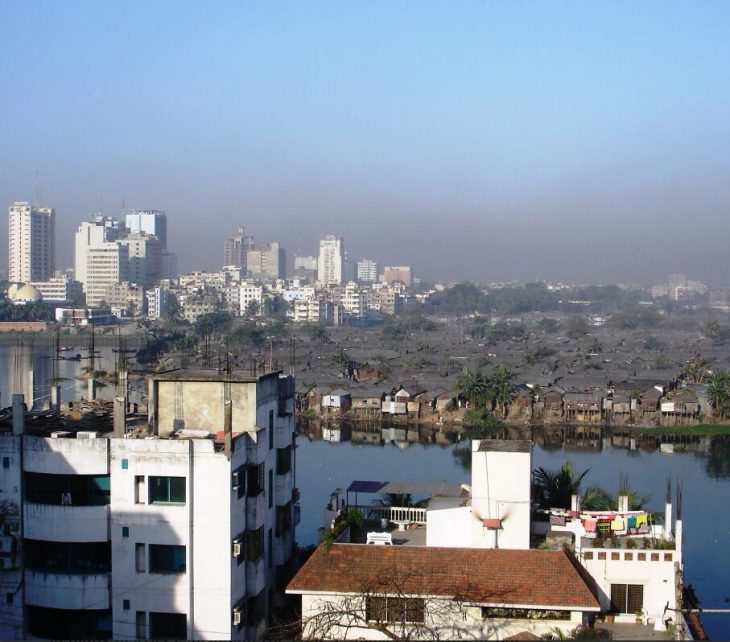 View of the poor settlement Karail 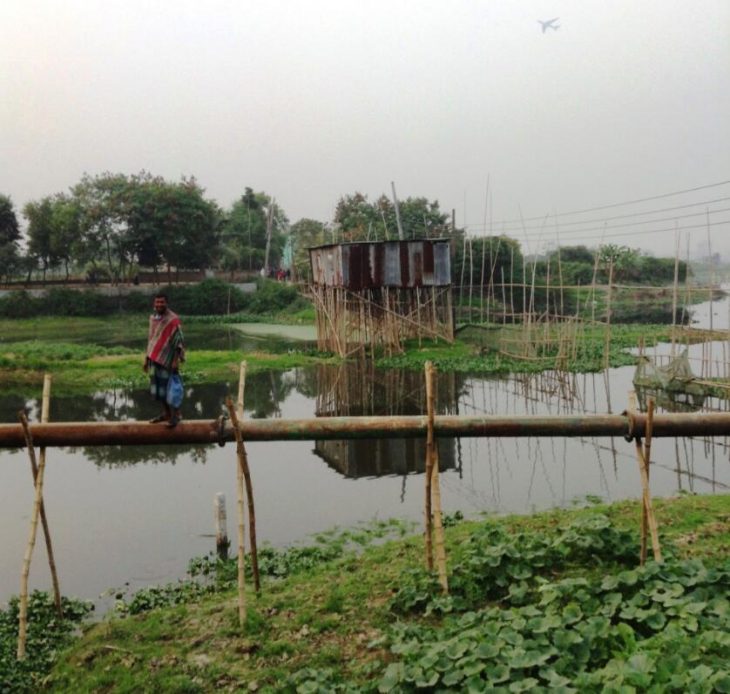 These pipes pump sand into some of the lower-lying 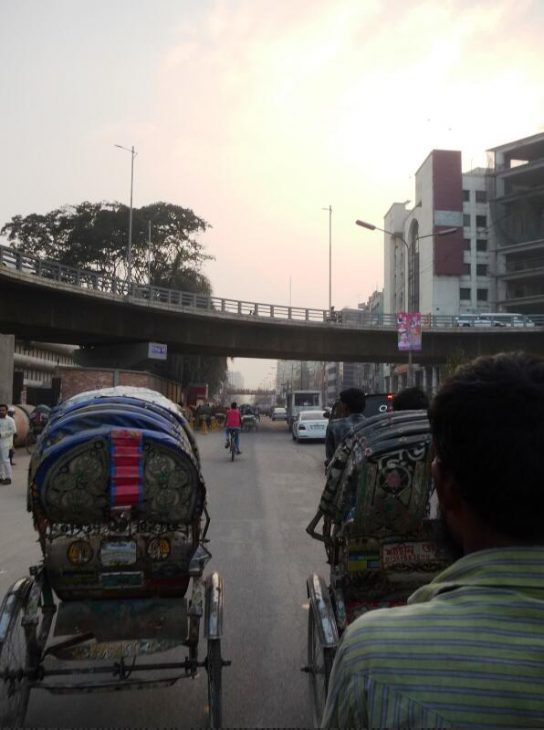 New overpass to the Hatirjheel district

Approximately 36.6% of the population of Bangladesh live in cities. The four largest metropolitan areas are the capital Dhaka (transliterated: Ḍhākā) with approximately 19.8 million, Chittagong (transliterated: Caṭṭagrām) with approximately 4.8 million, Khulna (transliterated: KhulꞋnā) with 1 million and Rajshahi (transliterated: RājꞋśāhī) with 880,000 residents. In most cities, the number of people moving from the countryside to the city or changing cities, whether permanently or temporarily, is stagnating or falling. Dhaka is exempt from this stagnation. Dhaka’s share of around 10% of the entire country’s population is growing steadily. This proportion has increased since the country was founded in 1971 by about 2% within a decade. In particular, the seasonal, temporary influx of workers results in a rapid, temporary deterioration in living conditions in many parts of the city. This applies to all metropolitan areas. In general, the basic supply in many parts of the city, including the capital Dhaka, is hardly or not at all guaranteed regardless of this temporary influx. This relates to the supply of water, electricity and gas as well as the disposal of garbage and sewage – problems here sometimes affect poor settlements and the accommodation of wealthier city dwellers alike. This results in living conditions. 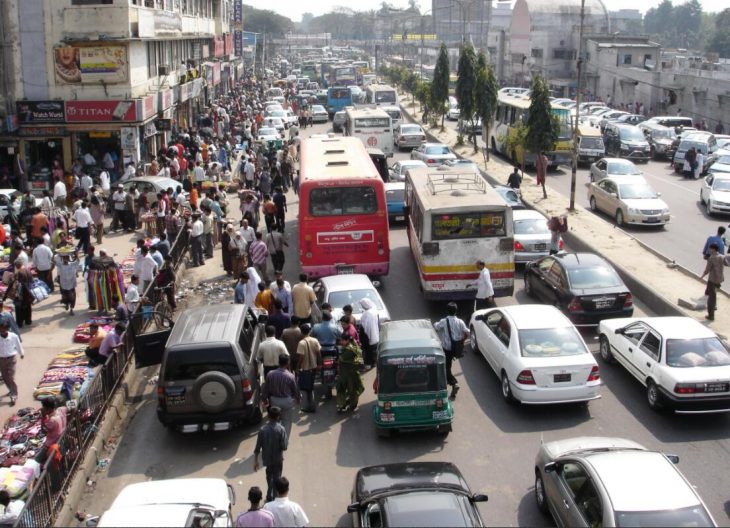 Traffic jam at the New Market in Dhaka

The use of a boat is sometimes commonplace and inevitable, not only for an overland trip, but also for getting around within individual cities. There are many very different types of boats in use for this, from the hand-operated boat (transliterated: naukā) to the passenger ferry (transliterated: kheẏā) for several hundred people. Motorized or “wheeled” traffic in the big cities is often slow. The reason for this is that the expansion of the dilapidated and congested road network in many places cannot keep up with the influx of residents, the high population growth and the increasing car ownership of the urban population in the upper income segments. In particular, this relatively thin middle and upper class owns a car and in some cases several cars per household. There are also many taxis. The state-owned Bangladesh Road Transport Corporation (transliterated: Bāṃlādeś Saṙak Paribahan Karporeśan; abbr.: BRTC) as well as countless private transport companies in the field of public passenger transport and goods transport move a large fleet of passenger buses, double-decker buses, minibuses and vans of various sizes throughout Bangladesh. These often carry more people beyond their originally envisaged capacities and contribute significantly to the high volume of traffic in the metropolitan areas. Most of the different forms of rickshaw are in private ownership, nowadays usually a three-wheeled bicycle with a loading area for transport goods or a seat for passengers. Motorcycles and bicycles are relatively rare in cities, although the number has been increasing for some years. To relieve traffic, the most frequented routes have been and are being given a second floor or elevated bypass roads are being built. The first light rail is also currently located in Dhaka under construction. The first of these light rail vehicles will probably go into operation in 2020 and will then complement the rail network of the Bangladeshi Railway (transliterated: Bāṃlādeś RelꞋoẏe). The heavy traffic on Dhaka’s streets and also the sometimes poor quality of the pedestrian paths make getting around on foot difficult. 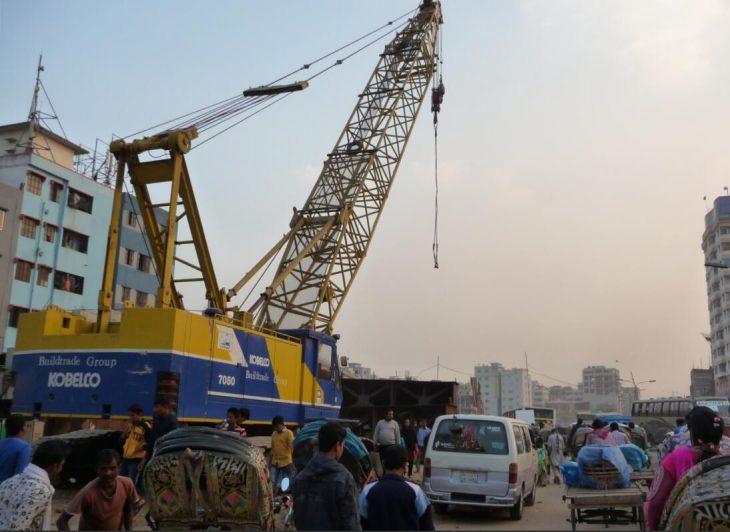 Start of construction of a flyover near Badda 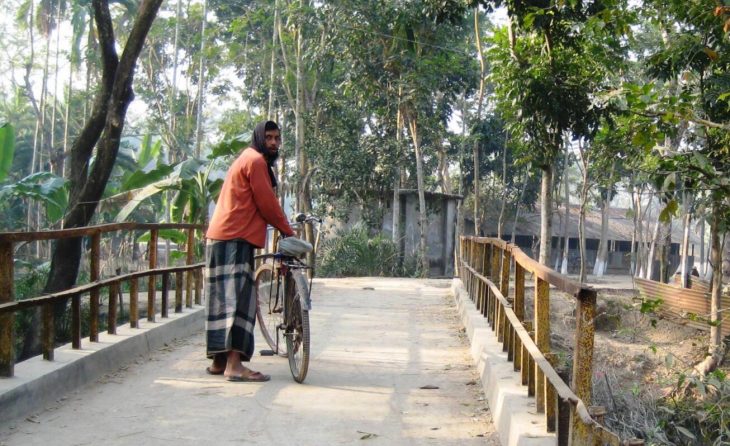 Cyclists in the country

Country name, other names and neighborhood

As a country located in southern Asia according to transporthint, Bangladesh means “land of Bengali / Bengal”. This toponym is therefore comparable in its structure to country names such as ‘Germany’ and ‘Finland’. The high German pronunciation of ‘Bangladesh’ comes very close to the original pronunciation. If you want more accuracy in the pronunciation of this country name, you should also stress the first syllable and pronounce the e in ‘Bangladesh’ like the first e in the word ‘Regen’. 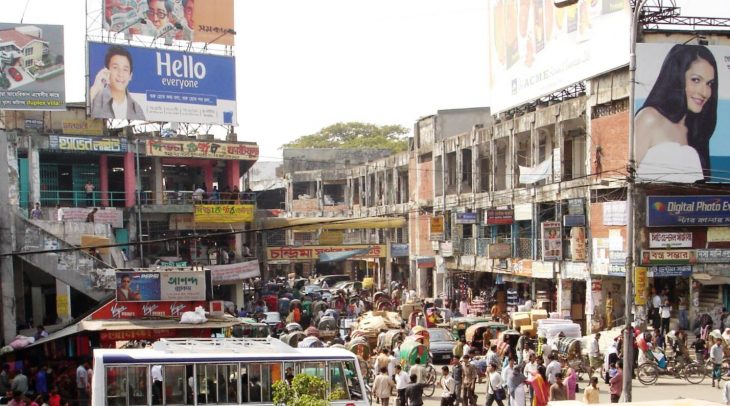 Shopping street at the ‘New Market’

The origin of the word Banga and Bangla does not seem certain. An early mention of the name may have been made in the Sanskrit written epic Mahabharata (transliterated (bengal.): Mahābhārat). There is written about a kingdom of Vanga, the description of which has led some researchers to what is now Bengal, but more to its eastern parts. Derivations of words from premodern languages ​​can also be found in some works. From the 10th century, terms such as ‘Bengala’ or ‘Bang’ appeared in travelogues from Portuguese, Arab and North African travelers. If these sources were the first written version of the name, the current name might even be a corruption or a foreign name. Those who traveled meant different places, e.g. the present-day Bangladeshi city of Chittagong (transliterated: Caṭṭagrām) alone or a much larger area, which may also have included the present-day Indian state of Bihar. However, science does not yet seem to have reached a largely accepted agreement about the origin of the name Banga, Bangla or Bengal.