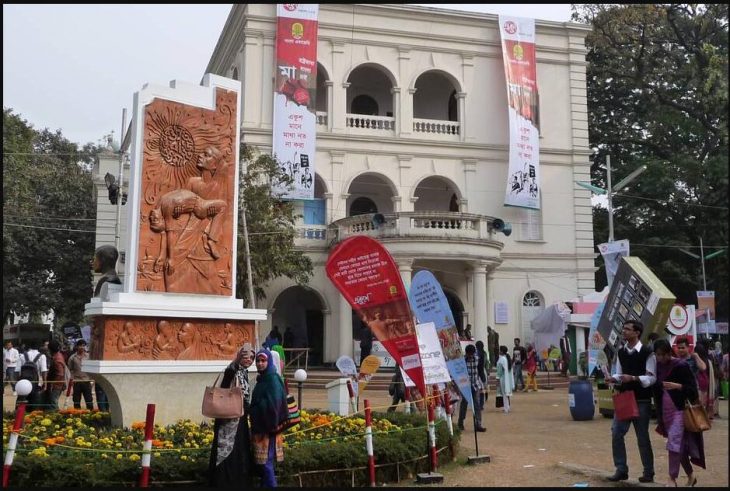 The areas of present-day Bangladesh have been part of a number of historical lands over time. All historical forms of government and former residents left traces, which are sometimes also visible today and which contributed to the shape of today’s Bangladesh and its residents. Specifically, ‘Bangladesh’ has existed as a country under this name and in its approximate current territorial extent since 1971. Fifty years have not yet passed. Freedom fighters and contemporary witnesses of the independence movement are still alive. Therefore, the memory of the independence movement and the struggle for freedom is present and vivid, especially in the cityscape of the largest metropolitan areas. A dispute with the Bangladeshi independence movement therefore appears necessary. 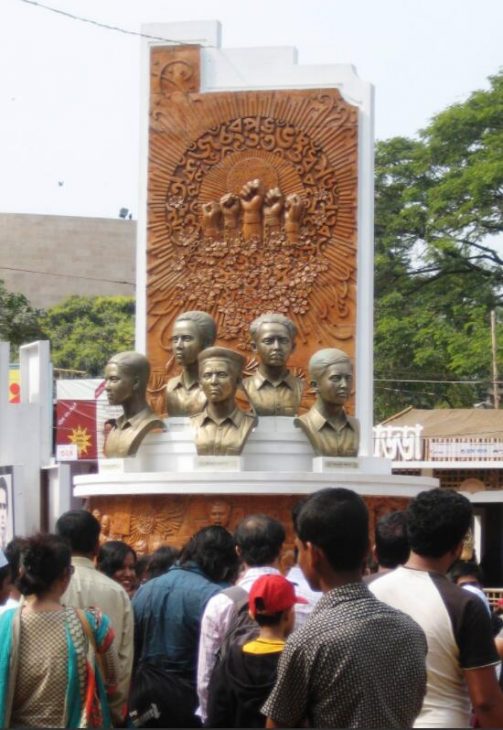 This memorial commemorates the victims of the language movement 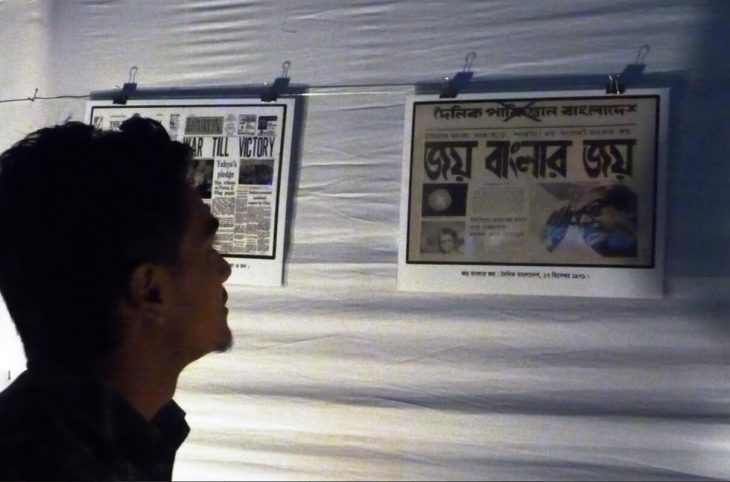 An original newspaper article about the victory against the Pakistani military 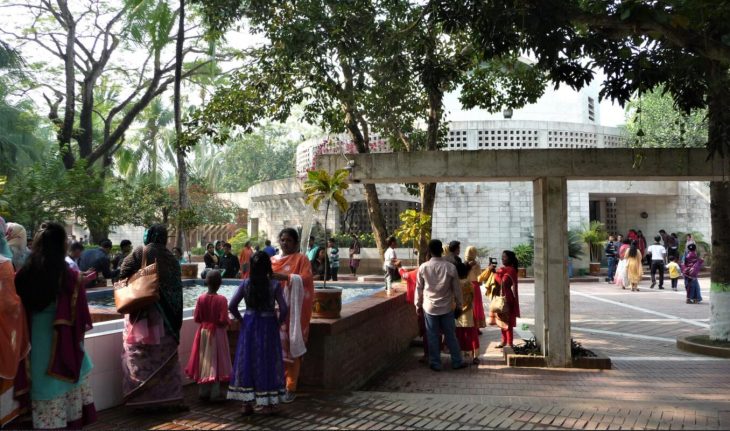 At the mausoleum of Sheikh Mujibur Rahman

Mujibur Rahman was released from prison in January 1972. He returned to Bangladesh, where from then on he was considered the ‘father of the nation’ (transliterated: jātir janak) and took over the political leadership. His idea was to establish a parliamentary form of government. At the same time he was under pressure from the still armed, large group of freedom fighters (transliterated: muktiyoddhā). These were mainly agricultural workers or worked in the country’s industry. Mujibur Rahman had given them, among others, the election promise that land would be nationalized, reformed and the property tax abolished. A quick implementation of this would have meant momentous upheavals. The Awami League government nationalized banks, insurance companies and jute factories, however, for example, land ownership largely left as it was. The resulting discontent was reflected in the founding of various opposition parties. The first general elections were officially canceled with a victory for the Awami League, but its authenticity was questioned by many groups and parties. The emerging protests and strikes were put down by the police and the military. This in turn led to violent clashes between Awami League members and the police and the former freedom fighters who were still armed and some of whom repositioned themselves against Mujibur Rahman. The country’s economy remained fallow, and the standard of living of the vast majority of the Bangladeshi population was lower than it was before the war of independence. The discontent culminated in the murder of Mujibur Rahman on August 15, 1975 and more than forty members of his family. Among the attackers were some former freedom fighters. The assassination was followed by a struggle for political leadership and, in the following decades, a constant change between democratic and dictatorial forms of government. Two daughters of Mujibur Rahman survived. You were in Germany at the time. One is Sheikh Hasina (transliterated: Śekh Hāsinā), multiple and currently incumbent Prime Minister of Bangladesh, a country located in southern Asia according to thereligionfaqs.

The part of the name ‘-desch’ (transliterated: deś) is also used as a noun in contemporary Bengali for places and countries from which someone can come. ‘Bangla’ is a proper name and is used for all Bengali, including the language and sometimes also speakers of this language. Furthermore, it is synonymous with the different, written-language variations for ‘Banga’ (transliterated e.g. Baṅga, Bāṅgāl), which is also the name of a region. This name corresponds to the Bengal known in the German-speaking area, which is used in German or English to give its name to various topographical features, such as the Bay of Bengal, and some animal species. The ‘Bengal’ region today seems to mean predominantly the settlement area of the Bengali speakers on and in the vicinity of the delta on which today’s Bangladesh is located. Therefore, in addition to Bangladesh, Bengal also includes neighboring areas in what is now India. However, Bengal cannot be precisely delimited geographically, historically, ethnically and culturally. For example, at no time did a coherent state structure exist, which would have grown homogeneously or stringently in terms of the characteristics mentioned and which would have been congruent with the currently assumed expansion area. As a name, ‘Bengal’ is therefore relatively abstract and is used in a versatile and sometimes ambivalent manner. If necessary, it can be deduced from the context or origin of a text or speaker whether someone means by ‘Banga’, Bengal or Bengal Bangladesh, Bengal or West Bengal. Analogous to the Indian state of West Bengal (transliterated: PascimꞋbaṅga) there is also the name East Bengal (transliterated: Pūrba Bāṃlā) for today’s Bangladesh.