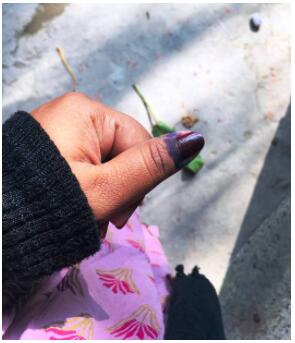 Marking of voters with special ink

The last parliamentary elections were held in Bangladesh on December 30, 2018. They were officially the 21st general election (transliterated: ekādaś jātīẏa saṃsad nirbācan) in the country. The date had previously been postponed several times for various reasons, but had to take place until the end of 2018 due to provisions in the Bangladesh constitution (Articles 72 (3) and 123), when the regular term of five years formally ended. 300 parliamentary seats had to be occupied, to which 50 seats reserved exclusively for women must be added, which are not available for general election but are nominated by the parties that make it into parliament. These last elections resulted in the following current composition of Parliament:

According to this distribution, the 50 additional, reserved seats for women were available in February 2019to be occupied by the parties. That means 43 more seats for the Awami League, four for the Jatiya Party, one seat for the Workers’ Party, two seats will remain vacant until further notice. The rivalries between supporters of the Awami League and the Bangladesh Nationalist Party (abbr.: BNP) led to problems in the run-up to and during the elections. The chairman of the BNP is Khaleda Zia (transliterated: Khāledā Jiẏā), a former prime minister and widow of the party’s founder. In 2008 and 2011, the Anti-Corruption Commission (transliterated: Durnīti Daman Kamiśan; abbr.: ACC, Dudak) accused her, other members of the BNP and others, of embezzling at least 21 million Bangladeshi taka, which in July 2018 corresponded to over 214,000 euros brought to the display.Sentenced to five years in prison. Five other defendants were also sentenced to prison terms. Despite the announcement that she would go into revision, she was unable to run for the elections at the end of 2018. It played a very strong, central role within the BNP. Probably mainly because Khaleda Zia did not run, the former ruling party BNP also lost many votes in these elections. The allegation of manipulation of the election and the election commission resulted in violent riots in some places. Furthermore, a report by Human Rights Watch criticized, among other things that security forces did not intervene impartially in rioting, that social media were restricted during the election period and that pro-government organizations intimidated voters.

The national anthem of Bangladesh refers to the natural beauty and fertility of Bengal. It bears the title “Mein Güldenes Bengalen” (transliterated: āmār sonār bā)lā) and represents the first stanzas of a song with the same title and the same melody by the poet, philosopher, musician, writer and native Calcutta Rabindranath Tagore, often also Rabindranath Thakur. The song was composed in 1906 when the Bengal region was not divided between two sovereign states. With Bengal as a region, in addition to today’s Bangladeshi areas, there is also the area of what is now the Indian state of West Bengal and a few adjacent, predominantly Bengali-speaking regions in today’s India meant. India has a different song by the same poet as its national anthem.

The coat of arms of Bangladesh

The coat of arms of Bangladesh

For all symbols mentioned here it should be noted that their recognition value fluctuates. The recognition granted to them as symbols to represent Bangladesh, or the sheer knowledge of these symbols as such, may diminish the further one moves away from the cities or the lower the income or school leaving certificate of a resident. Not all population groups would be d’accord with this selection. In addition, some autochthonous population groups, for example in the south-east of Bangladesh, a country located in southern Asia according to themeparktour, or even non-settled population groups do not fully recognize the Bangladeshi state and its authority.