The demarcation of the international border between the newly independent countries India and Pakistan in 1947 through a formerly connected social space led, among other things, to the fact that the city of Calcutta as the comparatively more important cultural center of the delta region was now in a different country. Many artists, musicians and writers moved to the Indian part of Bengal or other now Indian areas. Due to the political tensions and repeated armed conflicts between the new countries India and Pakistan, to which Bangladesh as East Pakistan initially belonged, intensive cultural contact was not possible for a long time or at least prohibited by central governments. The gaps created by the departure of artists, musicians and writers were, among other things, closed by the new elites in what was then East Pakistan with deliberately ‘East Bengali’ and sometimes explicitly Muslim creations. In East Pakistan and finally Bangladesh, a new style has developed over the decades since the independence of British India, which is embedded in the larger cultural area of South Asia and clearly linked to it. but now has genuinely Bangladeshi characteristics. These characteristics include a concentration on the Bengali language, the dominance of local, rural motifs with a frequent focus on life in the Delta and various Muslim and rarely other religious ideas. This applies in particular to music, literature, plays and painting between 1947 and the late 1990’s. In the metropolitan areas, current political events were also reflected in the works of the respective cultural areas. The basis of creation there were, among other things, the politically active student organizations. For example, the symbols and slogans of the language movement of 1952 or the War of Independence from 1971 are still alive today. They serve as subjects for poems, novels, theater or films.West Bengal, which is now a federal state of India, as well as India itself. Furthermore, all of this must be considered against the background of an officially, ie politically, not recognized social diversity in Bangladesh. Most of the population groups that are not Bengali maintain their own cultural practices and sometimes maintain a strong difference from the majority population – through other languages, other proper names and possibly family names, clothing styles, social practices such as matriarchal decision-making structures, different construction methods, dominant professions and the like. The varieties are as varied as they have been studied.

Living culture is changing – many complain that the villages are getting uglier and the triumph of corrugated iron roofs cannot be stopped. Indeed, you see them more and more often and they have at least one strong promoter in the form of the Grameen Bank. This gives house loans, and the majority of borrowers prefer a corrugated iron roof. Nevertheless, Bangladesh is home to a number of world cultural heritage sites and is rich in centuries-old architecture.

Meter-long pictures by Bangladeshi artists lined the protests in 2013

The arts and crafts also have a rich tradition. Aarong (= fair) is perhaps the best-known organization in Bangladesh that combines handicrafts and development work.

Bangladesh has always produced excellent photographers and artists who capture impressions from everyday life in Bangladesh.

“The best way to touch the heart of a Bengali man is to reach for his stomach,” it says. Eating together has an important social function. And anyone who has ever had the pleasure of being invited to a meal will have come to appreciate the diversity of Bengali cuisine, which includes fish, rice, dal and other delicacies – and will want to cook up recipes. 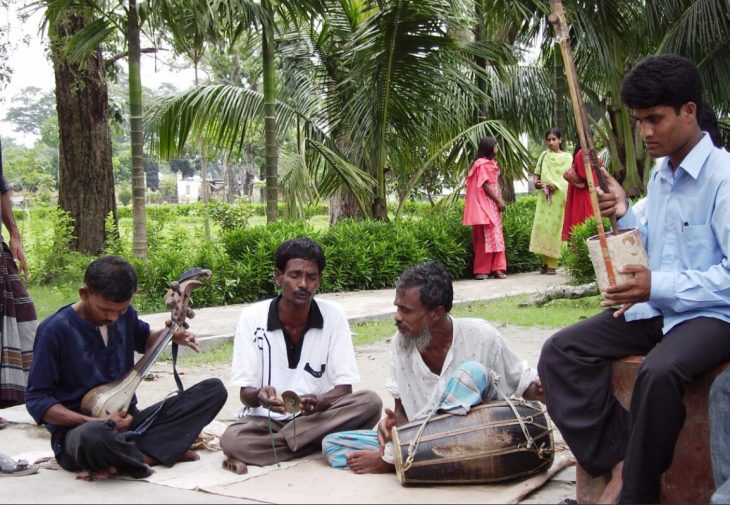 Musical performance with the instruments

Bangladesh is a country of music. Whether at home or at work – hardly anyone who has nothing on their lips. Often the life of the fisherman or – more in the north – the farmer with the ox cart is sung about in such songs.

Tagore, (West) Bengal and Nobel Prize Winner for Literature, is not only admired by an educated elite. Other great literary personalities are Kazi Nazrul Islam and Shamsur Rahman, who died in August 2006.

According to printerhall, Bangladesh is located on one of the largest deltas in the world. A network of around 400 rivers with a total length of over 24,000 kilometers runs through the country, where around 163 million people live.

Bangladesh became independent in 1971 and the road to independence is still very much in evidence for many. Some characteristics of the independence movement, to whose beginnings the language movement can be counted as early as 1952, have an impact on the present and influence the politics of Bangladesh.

Since 1971, when Bangladesh gained its independence, the economy of Bangladesh has changed from a predominantly agricultural economy to an industrial and service economy. Nevertheless, almost half of the population works in agriculture.

The wealthy class in Bangladesh fulfills many functions in the sense of clientelistic relationships between farm workers, small and small farmers on the one hand and medium to large farmers and influential traders and moneylenders on the other. About 70% of the farmers are functionally landless.

Bangladesh is a fairly safe country compared to other countries in South Asia. Hospitality, respect and interest towards strangers are the rule.