The leveling and rationalist tendency of the Enlightenment attenuates the differences between Germany and Austria, but does not stimulate the Austrian creative imagination, which later also reluctant to penetrate the German idealistic philosophy. The very short romantic season, mediated by the Schlegel brothers, has a very long and fruitful ending in Biedermeier, which coincides with the exhaustion of the eighteenth-century reform process, with the radicalization of the Josephan statist ideology and sees Austria becoming a stronghold of conservatism. Resignation, a sense of being uprooted from political reality, an anti-historical retreat on the past, fables of illusion and the magic of everyday things are the emotional ribbing common to the Weltanschauung of the four “great” ones, Grillparzer, Raimund, Nestroy and Stifter, and of the greatest lyricist of the generation born between the two centuries, N. Lenau. Lyric and narrative feed on this root and on the romantic taste of folklore and local color, which carry within them the seeds of realism that will acquire new provinces for poetry: Moravia (F. von Saar and M. von Ebner-Eschenbach), Galicia (L. Sacher-Masoch), Styria (P. Rosegger). The poets of Vormärz (period before 1848), first among them the liberal A. Grün, remain isolated in a climate of general stagnation in which later even L. Anzengruber, an anticlerical liberal precursor of naturalism, will fight in vain. Neither a Wilhelminian epigonal idealism nor the new revolutionary spirits nor Wagner’sreactionary mythologythey remove the Austrian stasis of the last quarter of the century. Naturalism, first proclaimed in Berlin and Munich and preached in Vienna by H. Bahr, assumes mild impressionistic forms in Austria or goes as far as the social grotesque (as in Simplicissimus, in which K. Kraus, Schnitzler, Rilke collaborated). But in general the Austrian narrative of this era tends to represent, instead of environments and social problems, inner climates and individual anxieties, thus merging, together with the liberty vein (called in Vienna “secession style”), in the movement known as the Jungwien, founded by H. Bahr and supported by a strong Jewish component, the extreme point of the so-called “art of the nerves”, typical of Austria, contemporary to Freud’s research and publications and in clear antithesis with the Wilhelminian spirits. The great Austrian decadentism, the world of Schnitzler, S. Zweig, R. Schaukal, J. Wassermann, H. von Hofmannsthal, analyzed and struck by the apocalyptic satire of K. Kraus, is unthinkable without psychoanalysis. In this humus and in the expressionist movement, not very congenial, in its schematic nature and in its political impetus, to the Austrian soul, more congenial to it in its connection of taste with the Baroque (a splendid example is the outsider G. Trakl), the revolutionists of the German novel of the twentieth century, Kafka and Rilke, in which the Hapsburg crisis expands into a European crisis and an existential crisis, are rooted; the break with the past will become irreversible with the prose of Musil and Broch. From Austria, a lateral and therefore conservative area of ​​the Germanic world, but an area historically central to Europe, therefore an “experimental station of the end of the world” (K. Kraus), a new literature investigating man and his possible destinies is born: “Religious book on the presuppositions of unbelief” defines Musil Der Mann ohne Eigenschaften (The man without quality). The exhaustion of the Habsburg myth, the definitive paleening of the specific Austrian atmosphere with Nazism and the Second World War, still celebrated by authors such as J. Roth, H. von Doderer, GE Saiko, make it difficult to talk about “Austrian literature”, without going down to analyze the individual authors. The most illustrious names of the generation born in the 1920s are Gerhard Fritsch (b. 1924), E. Fried, I. Aichinger, H. Eisenreich, I. Bachmann. Check watchtutorials to see Austria Destinations.

The Austrian generation that grew up during the war is gathered in or around the Vienna Group (which included HC Artmann, K. Bayer, G. Rühm, O. Wiener and others) and of Graz (founded in the late 1950s and of which B. Frischmuth, G. Jonke, H. Eisendle, G. Roth are part, intended to break the bottlenecks of Austrian provincialism) and sees the rise of exceptional experimental poets such as the aforementioned Rühm and especially E. Jandl and original narrators such as P. Handke and Th. Bernhard. The disappearance of the latter, despite the harsh criticisms that had been addressed to him that had accused him of thematic repetitivism and linguistic schematism, left a big void in Austrian culture. The latest literary trends seem to favor the recovery of the imagination, using the work as a great metaphor on contemporary issues. However, there are few new names that have come out of national borders. Among these are the Viennese writer Friederike Mayröcher, well known in Austria for her poetry production but whose prose works have only recently been translated into Italian and appreciated (Viaggio nella notte, 1984, and Il mio cuore, la my room, my nose, 1988, Magic sheets, 1998); Marlen Haushoger, in whose novels a sensitive and acute psychological analysis predominates, and, finally, Christoph Ransmayr, in whom the mixture of ancient and modern turned out to be among the most interesting and most successful literary phenomena at the end of the 1980s. The propensity towards a fantastic dimension, the search for situations on the border between reality and imagination, are also latent in children’s literature, a genre cultivated by B. Frischmuth, which reflects in his work all the peculiarities of the feminine universe. Considerable development has had since the mid-1970s the so-called “literature on fathers”, which inspired J. Schutting and B. Schwaiger. On the other hand, P. Henisch, who had opened the dispute with the previous generation and with National Socialism in general, came to a reflection on his own generation and on the failure of ’68. Also linked to this genre is the vast production in the field of memorials to which H. Spiel (1911-90) made a considerable contribution, with the two volumes that make up his autobiography Die hellen und die finsteren Zeiten (1989: The clear times and dark ones) and Welche Welt ist meine Welt? (1990: What World Is My World?). Among the most interesting novelists of the new generations there are M. Fritz, J. Haslinger, E. Reichart (mainly engaged in recalling the most painful and problematic aspects of the past), J. Winckler, FJ Czernin, M. Köhlmeier, but above all the provocative E. Jelinek (The lovers, 1994; Nuvole-Casa, 2000), awarded the Nobel Prize for literature in 2004. In the poetic field, Ch. Lavant, F. Kiessling and the exponents of the “Graz group” are worthy of mention. which B. Frischmuth, A. Kolleritsch and P. Rosei. 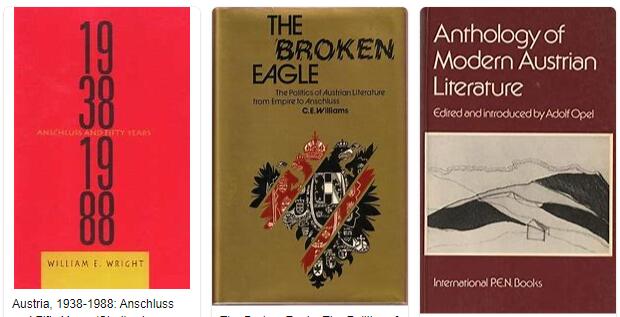