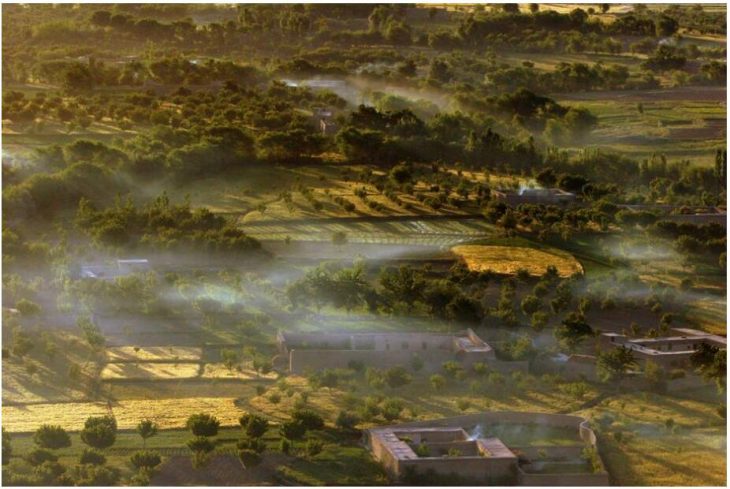 Due to the topographical and climatic conditions mentioned, Afghanistan’s agriculture is essentially limited to the mountain oases on the north, west and south edges of the central highlands, the basin landscapes of the Kabul region and the river valleys on the Pakistani border. Only about 12% of the land area of Afghanistan can be used for agricultural cultivation. It dominates the rainfed agriculture as the nation’s only about 6% of arable land is irrigated; accordingly, agriculture is highly dependent on sufficient rainfall.

Among the cultivated cereals, wheat dominates followed by barley. Rice is mainly cultivated in the northeastern provinces of Baghlan, Kunduz, Takhar, Laghman, Nangarhar, Balkh and Kunar, but also in the west in Herat province. Along with wheat, barley and maize, it is one of the most important food crops.

Growing cotton has a long history in Afghanistan, a country located in southern Asia. As early as the end of the 10th century, cotton clothing was being made in Herat, Bost and Kabul and also exported. After an eventful development, cotton became one of the most important commercial crops from the end of the 1950’s, with large areas under cultivation, high production figures and profitable export quotas. This positive trend stopped at the beginning of the 1980’s and the production of cotton has declined sharply since then. There are various reasons for this: on the one hand, state subsidies for cotton cultivation ceased, and on the other hand, persistent droughts caused crop failures. The war-related destruction of irrigation systems and production facilities, the displacement of farmers and the drop in prices for cotton in local markets did the rest.

Speaking of opium poppies: a pilot project by the Ministry of Agriculture initially aims to promote the cultivation of aloe vera in the provinces of Nangarhar, Badghis and Farah in order to create an alternative to poppy cultivation in the future.

However, utilization for export has so far often failed due to inadequate further processing of the fruit, so that Afghan fruit is rarely offered outside of the country’s borders.

In addition to the large number of types of fruit, dried fruit (especially raisins), almonds, pistachios and walnuts also play an important role in Afghan agriculture. The cultivation of melons, onions, potatoes and tomatoes should also be mentioned.

The province of Herat is also the main cultivation area for the Afghan saffron production. For a few years now, this type of crocus has also been grown in the provinces of Ghazni, Farah and Helmand. The Afghan Ministry of Agriculture is also planning to locate the cultivation nationwide by distributing saffron bulbs to farmers in all 34 provinces. Saffron is used both as a spice and as a coloring agent or as an ingredient in perfumes; It is also said to have healing properties in medicine. However, the cultivation is very labor-intensive, the harvest is purely manual work and the harvested saffron must be handled very carefully so that it is not damaged. Compared to other agricultural crops, however, the cultivation of saffron is less irrigation-intensive, so that the existing water resources can be used more sustainably.

Last but not least, saffron cultivation can strengthen the role of women as it creates jobs and contributes to women’s economic independence, as the example of the Afghan Women Saffron Association (AWSA), an umbrella organization of several women-run saffron companies, shows.

Most of the livestock is raised extensively in Afghanistan. Pashtun nomads wander with their sheep herds between the summer pastures of the central highlands and the mild winter steppes of the southwest and the Pakistani Indus plain. In contrast, cattle farming plays a lesser role; it is often found as a sideline for the smallholders in the irrigated river oases. It is also worth mentioning the breeding of karakul sheep for fur production, horse breeding is common in the northern provinces, which are mainly inhabited by Uzbeks and Turkmen. Small livestock farming (chickens, goats) is widespread throughout the country, including urban environments.

Like all other branches of the economy, Afghan agriculture has been badly affected by the wars of recent decades. In addition, there was a devastating period of drought in the second half of the 1990’s, which forced numerous nomads in particular to give up their traditional way of life. The most serious impairment of agriculture through the consequences of the war continues to be the mining of a not inconsiderable part of the arable land in Afghanistan; in addition, in the provinces of the southwest (Kandahar, Helmand) there is also extensive destruction of the previously existing irrigation systems.

Since poppy seeds place much lower demands on the location in terms of soil moisture than wheat or even rice and, moreover, through the extraction of Opium, which produces a significantly higher income, the cultivation of opium poppies has increased dramatically over the past few years. Even in provinces that were at times (almost) opium-free, cultivation is on the rise again.

The farm structure of Afghan agriculture is largely characterized by small-scale family farms with subsistence farming, only in the northern provinces are large land holdings to be found. Lack of capital and the fragmentation of the cultivated areas into small and very small parcels, due to the real division in Islamic inheritance law, make mechanization considerably more difficult. 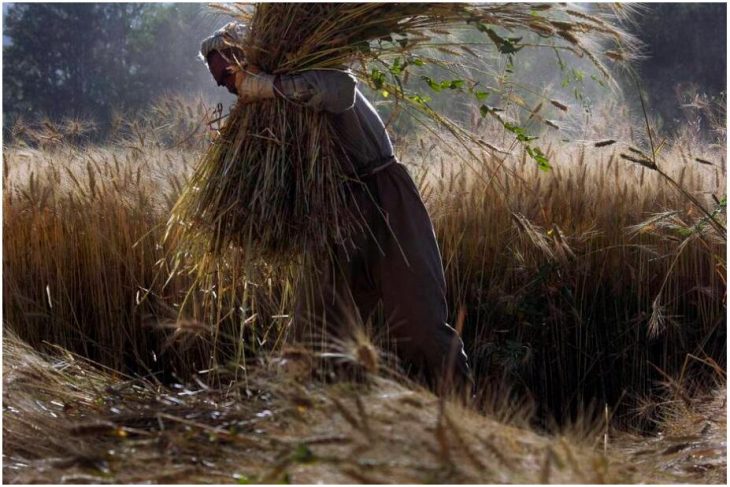