The prospecting and development of the natural resources of Afghanistan is still in its infancy, despite certain progress made in the decades before the Soviet occupation. Apart from the lapis lazuli deposits in Sar-e-Sang in the Badakhshan province, which have been used since prehistoric times, only natural gas production plays a role for export. A pipeline has been running to Central Asia from the natural gas fields near Khwaja Gogerdag (Jozjan Province) since the 1960’s. Also worth mentioning are rock salt deposits near Taloqan (Takhar Province) and coal near Ishpushta (Bamiyan Province). Very rich and high-quality iron ore deposits exist at the Hajigak Pass(Bamiyan Province), however, in addition to the war, the inaccessibility of the region has prevented mining to this day. More recently, preparations began for the development of extensive copper ore deposits at Aynak in Logar Province; A Chinese consortium of companies was awarded the contract to exploit the deposits in 2007.

In the meantime, there were fears that the Chinese group of companies (MCC) could be withdrawn from the then approved contract. At least that was what the Afghan Mining Minister, Saba, indicated and promised new negotiations with other companies. Saba criticized the Chinese project implementation in particular, because strictly speaking nothing has happened since the contract was awarded, even the feasibility study was only available after a few years and only insufficiently takes into account the ecological and social consequences of the project. The project is likely to have further problems after it became known that the management of the Chinese state-owned company was expelled from the Communist Party on charges of corruption and was thus de facto dismissed. In the meantime, the MCC has been transferred to the China MinMetals Corporation, which is to cover the value chain from exploration to advanced processing. However, dismantling has still not started and nobody knows when the time will come.

In 2010, after prospecting by US geologists, extensive deposits of lithium, gold, molybdenum, bauxite and rare earths in various parts of the country were discovered. The market value of these deposits is estimated at just under a trillion US dollars, the Afghan government is even talking about 3 trillion (!) US dollars, but this is doubted by experts.

Wood and animal dung are traditionally used as fuel. The enormous population growth over the past 50 years has led to an extensive decimation, also due to the accompanying rapidly increasing demand for firewood the originally existing forest and bush forest vegetation. The supply of electricity to the population, previously limited to the larger cities, has largely collapsed due to the war. Existing hydropower plants (e.g. Sarobi, Darunta) have been partially repaired in recent years, but not even the modest level of the 1970’s has been achieved, so that the capital Kabul has been connected to Tajikistan and Uzbekistan via a high-voltage line since the beginning of 2009 is powered off. In most parts of the country there are daily power outages (if there is any connection to the power grid at all exists), so that private consumers make do with diesel generators as far as possible, the exhaust gases of which contribute significantly to air pollution in cities. In the particularly restless southern provinces in particular, the inadequate security situation has so far prevented the restoration of the infrastructure for energy generation to a significant extent. An example of this is the kayakai dam northwest of Kandahar, which has been contested for years.

The possibilities for using hydropower are limited due to the arid climate; The greatest potential for expanding electricity generation lies in solar technology. In addition, there is the use of wind energy, especially in the western parts of the country (120-day wind during the summer months). Given the current precarious security conditions, however, despite the good conditions, such large-scale projects are out of the question for the time being. Nevertheless, there are projects at the municipal level, in particular to supply more remote regions with renewable energy 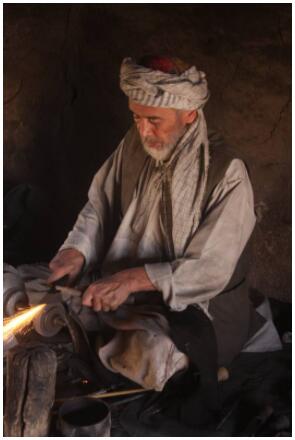 As a country located in southern Asia according to countryvv, Afghanistan’s industrialization began around 1900, but systematic industrial policy did not begin until after World War II. Nevertheless, the industrial settlements remained insignificant until the beginning of the Soviet occupation, mainly textile, food and cement factories, which in turn were mostly concentrated in Kabul and the northern provinces of Balkh, Kunduz and Baghlan. During the subsequent armed conflict, Afghan industry was also largely destroyed.

In contrast, traditional handicrafts played a greater role; individual products such as carpets were or are now relevant for foreign trade again. Knife and blade manufacture in Charikar (Parwan province), ceramics in Istalif (Kabul province) and glaziers in Herat are or were regionally significant handicraft industries to call. However, even in the pre-war period, Afghan handicrafts were under intense competitive pressure from imported cheap industrial goods from India and China. Since then, production – again, of course, due to the chaos of war and the associated refugee movements – has plummeted.

Due to its geographically unique location as a transition country between the Near East, Central, East and South Asia, Afghanistan has always been a country of (transit) trade. This is also true of the present, all the more since, on the one hand, after the collapse of the Soviet Union, the now independent states of Central Asia opened up to economic relations with the outside world; on the other hand, due to the destruction of the war years (and also due to a largely lacking state industrial policy), few other sources of income have remained.

It is therefore not surprising that the profiteers of the post-Taliban era preferred to reinvest their (often drug trafficking) income in the trading sector. In cities like Kabul and Herat, the futuristic glass palaces of luxurious shopping centers are growing out of the ground, the markets of the cities are overflowing with legal and less legal imported goods from Pakistan, India and China. This renaissance of Afghan trade corresponds to the traditionally higher appreciation of commercial over craft or even industrial activity, which is widespread, especially among the Pashtuns, the numerically and politically dominant ethnic group in Afghanistan. Even before the war it was Pashtuns, often former nomads, who dominated the freight forwarding industry that was emerging with the construction of modern motorways.

A milestone in the revival of Afghan transit trade is the Afghanistan-Pakistan Transit Trade Agreement (APTTA), signed by the governments of Afghanistan and Pakistan on July 19, 2010, which, after 45 years of negotiations, allowed Afghan freight forwarders to move freely through Pakistan for the first time India allowed.