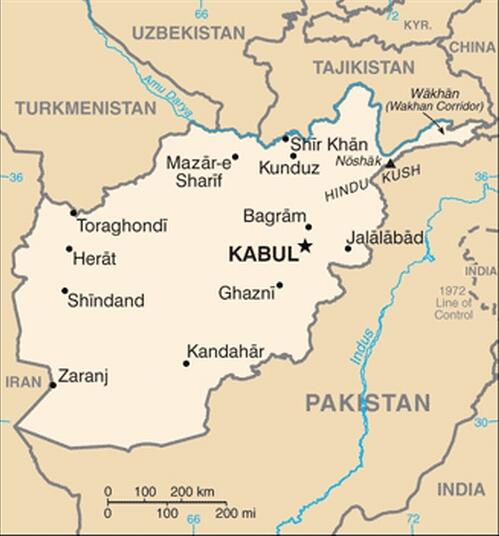 Even before the Soviet occupation and the civil wars that followed, Afghanistan was one of the economically and humanitarian least developed countries on earth. More than 30 years of war have exacerbated this situation. Only since the fall of the Taliban regime at the end of 2001 has a gradual improvement become apparent, thanks to the massive commitment of the international community. Nevertheless, the country with an average annual per capita income of US $ 681 (2018) and an average life expectancy of around 64 years still belongs to the group of “Least Developed Countries” (LDCs) defined by the United Nations. In addition, Afghanistan is one of the heavily indebted poor countries (HIPC) and is taken into account in the debt relief initiative decided by the World Bank and the International Monetary Fund (HIPC initiative).

The economic activity in Afghanistan is determined by the natural environment and climatic conditions. The predominantly mountainous character of the country makes inland traffic and agricultural cultivation difficult. Agricultural production is also restricted by the arid to semi-arid climate. Without access to the sea, Afghanistan’s foreign trade is accordingly heavily dependent on the political goodwill of its neighbors, above all Pakistan. In addition, its central location between the cultural and economic regions of the Middle East, Central and South Asia, has made Afghanistan a country of transit trade par excellence since time immemorial (Silk Road).

Voting in an election in Afghanistan

Due to exceptionally good harvests and a rapidly growing service sector, economic growth was around 14% in 2012, while economic growth was 3.6% in 2013. Despite renewed record harvests in agriculture, weakened growth rates in the non-agricultural economic sectors have led to significantly lower economic growth. One of the reasons for this are the political circumstances and the precarious security situation. The troop withdrawal at the end of 2014 also had a lasting effect on the investment climate.

The service sector, which contributes a good half of GDP, is essential for economic growth. Overall, it has a share of 52.5% of the Afghan GDP with an employment rate of around 10%. Industry and handicraft have a share of 21.8%, of which the handicraft accounts for 12.8%, with an employment of approx. 10% of all economically active persons. Finally, agriculture has a share of 21.7% of GDP, although around 80% of the labor force is employed here.

The inflation rate was 4.4% in 2018. Government revenue was 25.3% of GDP in 2017, while government spending was 25.9% of GDP. In addition to the negative budget balance, however, it should be noted that over 60% of government revenues are financed by the donor countries.

The main exports are dried fruits, fresh fruits, carpets, medicinal herbs and animal by-products such as wool and fur. The main importing countries are especially Pakistan and India, followed by Iran, Turkey to Iraq and the UAE. Since the export goods are primarily based on the agricultural sector, export is also highly dependent on the efficiency of this sector.

Petroleum and petroleum products, household goods, medicines, machines and machine parts as well as food are primarily imported. Most of the imports come from Pakistan, Iran, China, Kazakhstan, Uzbekistan, Japan, Turkmenistan and Malaysia.

In 2018, Germany exported goods worth around 80.4 million euros to Afghanistan, mainly motor vehicles and motor vehicle parts, data processing equipment, electrical and optical products, machines and chemical products. Goods such as food, animal feed, textiles, leather and leather goods and agricultural products were imported with a total value of around 11.45 million euros. Exports fell by 4.26% compared to the previous year, while imports rose by 20.84%.

To make for the economic development of Afghanistan are the high unemployment, corruption and clientelism, the drug economy, the high rate of illiteracy, and not least the tense security situation and the increasing uncertainty about the future development of the country.

Current overviews of the economy and economic development in Afghanistan provide:

Interesting from an economic-historical point of view:

The Japanese economist Manabu Fujimura from the Asian Development Bank wrote the first comprehensive account of the Afghan economy since 1978 at the beginning of 2004. An assessment of the further economic development after the presidential elections of October 2004 is also available from the same author.