Your search found 61 testing locations. Most of these Maryland test centers are located inside high schools, community colleges or universities, among which you can pick one to take the ACT exam. Please know that on the test day, test takers can use any 4-function, scientific, or graphing calculator. The following is a full list of test centers for ACT exam in Maryland by city. 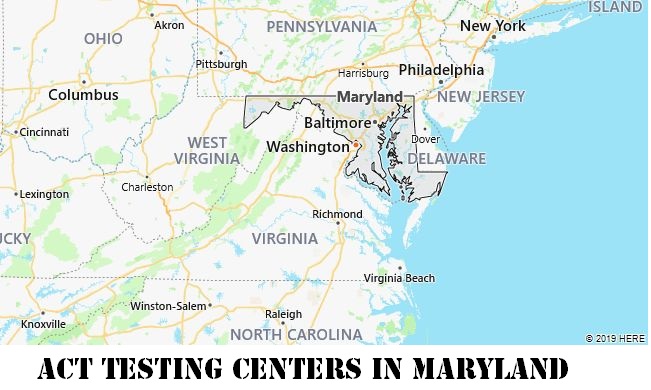 Not sure on which dates you can take the ACT exam in 2019 and 2020? The following chart offers up-to-date information on recent ACT exam dates and registration deadlines for the 2019-2020 school year in Maryland.

In the 1760s and 1870s, dissatisfaction with British rule grew in Maryland, as in other American colonies. One of the most famous incidents of that period occurred on October 19, 1774, when a merchant ship arriving from London was burned in Annapolis along with a cargo of tea (which was a kind of repetition of the famous ” Boston Tea Party “). “). Later, delegates from Maryland signed, among other participants in the Continental Congress, the Declaration of Independence. Although during the American Revolution there were no hostilities in the state, volunteers from Maryland fought in the ranks of the American army. During one of the battles, General George Washington called the brave soldiers of the Maryland Regiment the “Old Line” (hence one of the state’s famous nicknames.) On April 28, 1788, Maryland legislators ratified the US Constitution, thereby becoming the seventh state of the United States.

Maryland traditionally ranks among the first places in the country in terms of average income per family. Much of the wealth of the state is due to the proximity of the US capital and, as a result, the presence of a large number of federal institutions (providing many jobs). The relatively few industrial enterprises of Maryland are mainly focused on high-tech industries: aerospace, bio- and information technologies, and electronics. Traditional and important for the economy of the state is industrial fishing and seafood, especially crabs. Maryland farms raise cattle (mostly dairy), grow corn, soybeans, and various vegetable crops (including greenhouses).