Your search found 8 matches. The following is the full list of ACT testing locations in Switzerland among which you can pick one to take the exam. Please know that on the test day, test takers can use any 4-function, scientific, or graphing calculator. On the table below, you can also find all test dates through 2019. 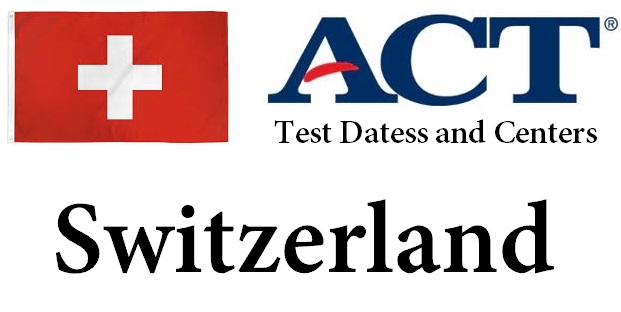 Switzerland borders in the north on Germany (Baden-Württemberg; border length without enclaves 364 km), in the east on Austria (Vorarlberg and Tyrol; together 180 km) and Liechtenstein (41 km), in the south on Italy (South Tyrol in the extreme east, Lombardy, Piedmont and Aosta Valley; together 800 km) and to the west by France (Savoy, Franche-Comté and Alsace; together 585 km).

Switzerland is essentially a mountainous country that encompasses part of the central Alps and landscapes in front of them to the north; its west-east extension is around 350 km, the north-south extension around 220 km. It is customary to divide it into three parts: Jura (11.9% of the country’s area) – Central Plateau (22.8%) – Alps, which run from northwest to southeast, with the latter in the foothills of the Alps (16%), the Alps (40.7%) and the southern side of the Alps (8.6%).

The Swiss Jura is divided in the southern part into the Chain Jura, which is formed from several almost parallel folds with wide longitudinal valleys (main settlement areas), the undulating plateaus of the Plattenjura in the Canton of Jura (including the Freiberg Mountains) and the largely unfolded Tabular Jura in the north. The south-eastern border of the Jura forms the line from the west bank of Lake Geneva  - north bank of the Neuchâtel and Biel lakes  - Aare valley – Rhine valley in the canton of Schaffhausen.

The south-east adjoining central plateau, from Lake Constance to the northern shore of Lake Geneva, is the Swiss part of the northern Alpine foothills. It forms a multifaceted plateau with numerous rivers to the north to the Aare and the Rhineand to the south to Lake Geneva; it is 20 km wide in the south (around Geneva), 70 km in the north and consists of tertiary molasses (Nagelfluh, sandstones, marls). The Mittelland is the most important economic area in the country.

The pre-alpine zone extends from the eastern tip of Lake Geneva to Lake Thun (especially the Freiburg Alps), further to Lake Lucerne (including including the Napf), from the eastern shore of Lake Zug to the southern shore of Lake Zurich (mainly the northern part of the canton of Schwyz) and to the Walensee and from here to the Rhine (in the east) and to the southern Bodensee (including the Toggenburg and the Alpstein with the Säntis).

The largest lakes in Switzerland

The Swiss Alps extend for around 300 km from the Dents du Midi (south of Lake Geneva) to the Rhaetian Alps in the east; they are divided by the distinctive long alpine valleys of the Rhône (canton Wallis), Vorderrhein and Inn (Engadin; with the south-west adjoining Bergell) (Alps). Its highest parts are in the south (partly on the Italian border) around the Mattertal (canton of Valais): Monte Rosa massif with Dufourspitze (4,634 m, highest peak in the country), Mischabel (cathedral 4,545 m), Weisshorn (4,505 m), Matterhorn (4,478 m, the most famous mountain in Switzerland) and Dent Blanche (4,357 m). The Grand Combin (4,314 m) also reach great heights further west and that Bernese Oberland (Finsteraarhorn group, highest peak 4,274 m).

Hydrography: About two thirds of the country’s area is drained to the North Sea via the Rhine (most of it in the center and west via its tributary Aare), almost one third via the Rhône (the southwest; the extreme northwest via its tributary Doubs), the Po- Tributaries Ticino (central south) and Adda (Bergell and Puschlav) as well as the Etsch (Münstertal / Val Müstair) to the Mediterranean and almost 5% over the Inn (Engadin) to the Black Sea. The watershed between these drainage areas is on Piz Lunghin between the Septimer and Malojapass at the valley ends of Oberhalbstein, Engadin and Bergell. Check healthvv to see Switzerland As a Destination Country.

The glaciated area in Switzerland has decreased by around 40% since the 19th century; In 1850 it was around 1,800 km 2, and by 2000 it had decreased to around 1,050 km 2. While a short-term increase in following a prolonged period of glacier retreat from the mid 1970s until the early 1980s, the glacier came, since an accelerated glacier retreat becoming apparent. In the last 30 years alone, Swiss glaciers lost around 20% of their mass. In the 2013 measurement period, not a single one of the more than hundred glaciers constantly observed today was able to maintain or increase its mass, with the small glaciers recording the greatest losses. The largest glaciers are the Aletsch, the Gorner – and the Fiescher Glacier with an area of ​​around 86.6, 59.7 and 34.2 km 2. The snow line on glaciers (equilibrium line) varies between 2,500 and 2,800 m in the area of ​​the northern main ridge of the Alps with higher precipitation, and between 2,700 and 3,100 m in the area of ​​the southern main Alpine ridge, in drier conditions.